How Effective is a Non-Binding Treaty Aimed at Ending Harassment at Work Places? | Inter Press Service

How Effective is a Non-Binding Treaty Aimed at Ending Harassment at Work Places? | Inter Press Service

How Effective is a Non-Binding Treaty Aimed at Ending Harassment at Work Places? 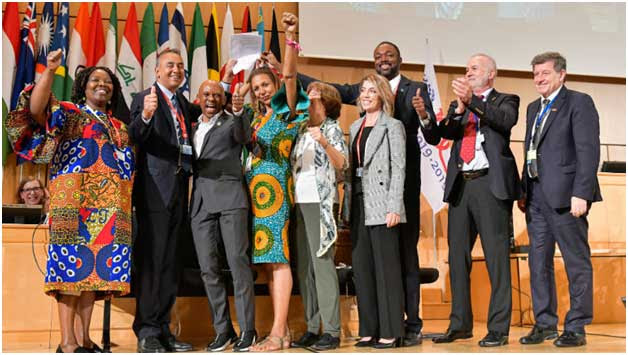 Delegates at the International Labor Conference in Geneva which adopted a landmark Treaty last week.
UNITED NATIONS, Jun 26 2019 (IPS) - Against the back drop of widespread charges of sexual abuse and harassment at workplaces– including the United Nations– the International Labour Conference (ILC) last week adopted a “Convention” and a set of “Recommendations” to protect workers and employees worldwide.
According to the Geneva-based International Labour Organisation (ILO), whose broad policies are set by the ILC, the Convention will enter into force 12 months after two member States have ratified it. The “Recommendation”, which is not legally binding, provides guidelines on how the Convention could be applied.
Rothna Begum, women’s rights senior researcher at Human Rights Watch (HRW) in Geneva, told IPS the treaty needs to be ratified by a couple of states before it can start to go into effect (and it takes another year after the initial ratification to come into force).
The Convention, she said, is an international treaty that is binding on Member States that ratify it, while the accompanying Recommendation provides more detailed guidance on how to apply the Convention.
“The Recommendation is not binding but it provides the necessary guidance for understanding the obligations set out in the Convention.”
She pointed out that there is also a resolution that once adopted will direct the ILO to have a strategy to have a ratification campaign and to help governments, employers’ organizations and workers’ organizations to implement it.
Paula Donovan, a women’s rights activist and co-Director of AIDS-Free World and Code Blue Campaign, told IPS: “It’s breathtaking to realize that less than a decade ago, few imagined that such a progressive convention could be adopted at the ILO at all, never mind by a landslide”
Ironically, she pointed out, the UN’s unique immunity means that its own workplaces won’t be affected, even in countries that ratify this convention.
“But last week’s victory should inspire the hope that the UN might choose to change with the times, and actually join the revolution it champions,” she declared.
Asked about its implementation, Dr Palitha Kohona, a former Chief of the UN Treaty Section, told IPS: “The question of whether the ILO convention on violence and harassment in the world of work is mandatory or voluntary would depend on its own provisions”.
Generally, ILO conventions, of which there were 189 as of July 2018, permit states parties to implement their own treaty obligations using their own mechanisms.
In general, he said, treaties are best implemented where the states parties feel obliged to implement them in their own domestic jurisdictions because implementation is in their own best interest.
Voluntary implementation produces the best results. Where a treaty has mandatory provisions, their implementation would require the creation of a range of international implementation mechanisms, which is not easy, said Dr Kohona, a former Permanent Representative of Sri Lanka to the United Nations.
Asked about the effectiveness of the treaty and its implementation by member states, he said this would depend on the convention itself.
If it is a requirement for the Convention to be ratified for it to enter into force for a particular signatory state, until such ratification is effected, the convention would not be legally binding on that state.
There are many examples where states had signed international conventions but not ratified them, he noted.
“In such cases, due to the provisions of the convention itself, non-ratifying states would not be legally bound by its provisions. Other treaties, provide for them to be legally binding on signature alone. This is a choice that the negotiating states must make,” he added.
Asked if ILO should assign the task of monitoring how the treaty is being implemented, Dr Kohona said” “It is not uncommon for the organization, under whose auspices a treaty is negotiated, to be given the task of monitoring its implementation by participating States.
But the treaty/convention must make the necessary provision for this. Environment conventions generally confer this responsibility on the bodies established under them, he declared.
Ma. Victoria (Mavic) Cabrera Balleza, Chief Executive Officer (CEO), Global Network of Women Peacebuilders, told IPS the adoption of the ILO Convention on Violence and Harassment is a watershed moment in the struggle to eliminate violence against women in the workplace.
When it is ratified and fully and effectively enforced, this will change the lives of women around the world, she added.
“When women know they are safe, they will be more productive, more inspired and more motivated. That would be beneficial to everyone — to the women themselves, to the labor movement, to the business sector and to governments,” said Cabrera Balleza.
“This also proves that the #MeToo movement is or could be diverse. It’s not only for white women or women in North America and Europe. I sincerely hope that more women –especially in workplaces in developing countries will speak up about the harassment and violence committed against them; that all perpetrators will be brought to justice.”
She pointed out that the new treaty has proven that #MeToo can really be #WeToo! The next step is to get all governments to ratify the treaty.
“Civil society around the world should unite and mobilize to ensure that no government will get away with not ratifying it. Equally if not more important, ensure that the governments, the employers, the unions and workers’ associations are all held accountable for the enforcement of this groundbreaking treaty,” she declared.
Asked if the Convention applies to international institutions like the United Nations, an ILO spokesman told IPS that it applies to Member States that have ratified it, “and could be also used as reference for policies in international organizations.”
The new Convention—the Violence and Harassment Convention – was adopted by 439 votes in favour, seven against, with 30 abstentions. The Violence and Harassment Recommendation was passed with 397 votes in favour, 12 against and 4 abstentions. 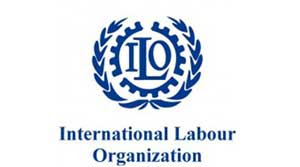 After the adoption of the treaty, ILO Director-General Guy Ryder said the new standards recognize the right of everyone to a world of work free from violence and harassment.
”The next step is to put these protections into practice, so that we create a better, safer, decent, working environment for women and men. I am sure that, given the co-operation and solidarity we have seen on this issue, and the public demand for action, we will see speedy and widespread ratifications and action to implement.”
In a statement released last week the Center for Women’s Global leadership said the progress in moving from widespread awareness of gender-based violence (GBV) in the world of work, to a mechanism providing accountability to end it, is the direct result of pressure and support from women’s rights and labor rights advocates around the world, including the 16 Days community who embraced our global call to action #ILOendGBV.
“These new standards recognize a broad definition of “worker” and “world of work,” which has the potential to address the diverse range of work realities for women; and we welcome an acknowledged link between domestic violence and GBV in the world of work”
An intersectional approach will be required in implementation, to ensure these standards are inclusive of marginalized women workers and encompass situations of vulnerability.
This Convention will positively impact billions of women around the world, and provide a strong foundation for continued progress in our effort to secure equality, regardless of identity, the statement added.
“ We will look to states and employers to develop promising practices, so that they not only meet these new standards, but reflect true leadership in honoring women’s rights as human rights, and the right to decent conditions of work as a human right,” the statement added.
Meanwhile, according to HRW, the treaty was adopted at the ILO’s International Labour Conference (ILC) comprising governments, worker representatives, and employer representatives.
ILO members spent two years negotiating the legally binding convention and an accompanying recommendation that provides guidance on implementing the convention obligations.
The treaty would cover workers, trainees, workers whose employment has been terminated, job seekers, and others, and applies to both formal and informal sectors. It also recognizes the impact of domestic violence on work. The ILC is the body that develops, adopts, and monitors international labor standards.
The treaty would require governments that ratify it to develop national laws prohibiting workplace violence and to take preventive measures such as information campaigns and requiring companies to have workplace policies on violence.
The treaty also obligates governments to monitor the issue and to provide access to remedies through complaint mechanisms, witness protection measures, and victim services, and to provide measures to protect against retaliation.
The writer can be contacted at thalifdeen@ips.org