Partnering for Youth in Central Asia 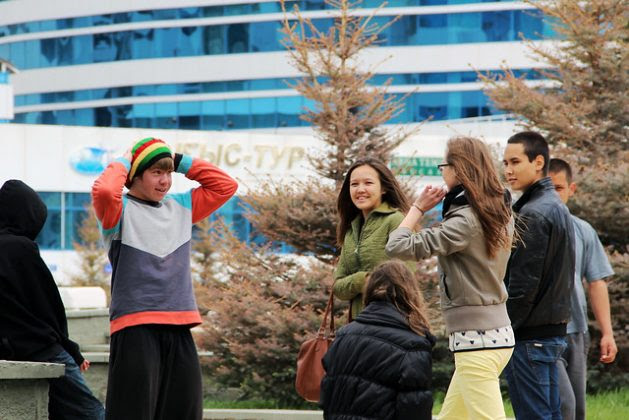 Teenagers hanging out in Kazakhstan. In Kazakhstan the lack of sexuality education has led to 91 percent of young people aged between 15 and 19 not having accurate and full knowledge on HIV and AIDS. Courtesy: Gulbakyt Dyussenova/ World Bank
UNITED NATIONS, Jun 25 2019 (IPS) - Young people around the world are facing increasingly insurmountable, persistent barriers as they try to achieve their full potential and secure a prosperous future. However, Central Asia and the Asia-Pacific have already begun working to ensure that no one is left behind.
In collaboration with the United Nations Population Fund (UNFPA) and the Asian Population and Development Association (APDA), parliamentarians across Asia gathered to address and act on the pressing issues that youth face today, including access to health and employment.

“The demographic dividend in countries in the region provides an opportune moment to continue to invest in youth for the benefit of all society,” UNFPA’s Representative in Kazakhstan Giulia Vallese told IPS.
Approximately 60 percent of the world’s youth live in Central Asia and the Asia-Pacific region.
Discussing sustainable development issues such as health care and employment access, parliamentarians met in a series of two meetings; the first being the “Leaving No One Behind” meeting in Kazakhstan in October 2018 and the “Act Today, Shape Tomorrow” gathering in Tajikistan in March 2019.
It is through such multi-stakeholder platforms and collaborations where success can be achieved, noted Vallese.
“It was important to bring together these different stakeholders to promote a shared understanding of closely interlinked root causes of issues and challenges faced by young people and increase appreciation of the urgent need for cross-sectoral, inter-ministerial, and multi-stakeholder approaches to help resolve the issues and challenges faced by young people in the region,” she said.
“Both conferences demonstrated the positive impact and the catalytic effect of multi-stakeholder partnerships for development. They allowed under the leadership of the respective host countries, Kazakhstan and Tajikistan, for the exchange of ideas on the role of national multi-stakeholder partnerships, which actually is the essence of implementing such a complex agenda as the International Conference on Population and Development (ICPD) programme of action and contribute to delivering on Agenda 2030,” she added.
Adopted by 179 governments in 1994, the landmark ICPD agenda marked the first paradigm shift which put people’s rights at the heart of all sustainable development.
In Kazakhstan, among the major issues discussed by participants was access to health information and services.
For instance, the lack of sexuality education has led to 91 percent of young people aged between 15 and 19 not having accurate and full knowledge on HIV and AIDS.
UNFPA also found that among those who reported having had symptoms of sexually transmitted infections, only 37 percent sought medical help.
Adolescents younger than 18 require parental consent to receive medical services.
In Tajikistan, access to employment and education particularly for youth and women remain limited.
According to the World Bank, inactive youth who are neither employed nor in school make up approximately 40 percent of the total youth population. Almost one third of those who are employed are in unpaid, informal jobs compared to 15 percent of adults.
Women have not fared well either as the female labour force participation rate was just 27 percent compared to 63 percent among males in 2013. Almost a quarter of women are in unpaid employment compared to 13 percent of men.
While education can help determine job outcomes, completion rates of secondary education may be falling in the Central Asian nation. For instance, more young women are not completing secondary school or technical education, the World Bank found.
Speaking to IPS, Deputy Speaker of Tajikistan’s Parliament Honorary Khayrinisso Yusufi said that youth are the “main creative force of the future” and stressed the need for investments to develop their potential.
“Developing the potential of young people, shaping their public engagement, strengthening their quality of education and health care, their participation in labour markets, and engaging in development processes reflect the aspirations of peoples and the policies of our countries to achieve the SDGs and create a better world for everyone,” she said.
And Central Asian countries such as Tajikistan and Kazakhstan are already on their way to empower youth.
During the conference in Dushnabe, Deputy Minister of Education and Science of Tajikistan Dr. Latofat Naziri told participants of the importance of actively engaging youth in order to help build their envisioned futures and involvement in society. With that in mind, study groups and clubs are being organised at the school level aimed at developing youth’s entrepreneurship skills.
Others, including Yusufi, pointed to the focus on strengthening the status of young people, especially girls. Among Tajikistan’s priorities are presidential quotas for girls’ higher education, and already the number of young parliamentarians and women in the country has increased, Yusufi told IPS.
After the meeting in Astana, participants adopted the Astana Declaration which promises to make primary health care, especially sexual and reproductive health services as well as sexuality education, more youth-friendly and accessible.
UNFPA has already begun working on this front, establishing Youth Peer Education which trains youth to help their peers and share accurate information about healthy life skills. Youth-friendly health centres have also been established in order to provide comprehensive and confidential services.
Vallese urged that such work should continue, and protective laws and policies are essential to support human rights of youth.
“Young people need to be part of the national dialogue for sustainable development…investing in young people is critically important to ensure future societies are economically dynamic and vibrant, as well as peaceful, inclusive and sustainable while providing opportunity for all,” she told IPS.
Yusufi also highlighted the role of parliamentarians, legislation, and collaborations to achieve such a vision.
“I am sure that the activity shown by the forum participants in discussing the problems and prospects of youth policies in our countries will be productive in the legislative field. We will be able to more effectively pursue a policy of modernisation, improve education, health, protect the environment, effectively apply technologies and support youth initiatives,” she said.
“We parliamentarians, reaffirmed the key role of parliaments and parliamentary networks in establishing a multi-state partnership with a view to sustainable development and a better future for humanity,” Yusifi concluded.
As this year marks the 25th anniversary of the ICPD, civil society and governments will gather in Kenya for the Nairobi Summit to advance the ICPD’s goals.