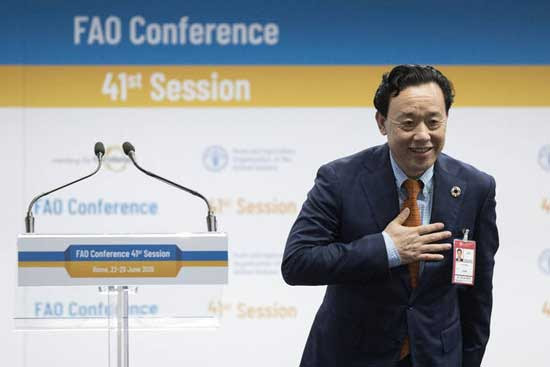 ROME, Jun 24 2019 (IPS) - Qu Dongyu, China’s vice minister for agriculture and rural affairs, was elected to be the next Director-General of FAO, winning a majority of the 191 votes cast in the first round of an election held Sunday.
Qu said he will be “committed to the aspirations, mandates and missions of the Organization” and pledged to lead “all of FAO’s staff in working for member countries and for the world’s farmers.”
The new Director-General of FAO will be in office for the period 1 August 2019 to 31 July 2023. He will be eligible for only one additional mandate of four years.
Qu Dongyu succeeds José Graziano da Silva, who was first elected in 2011 and has served two consecutive terms.
These are some excerpts from a presentation he made over the weekend to the FAO Conference.