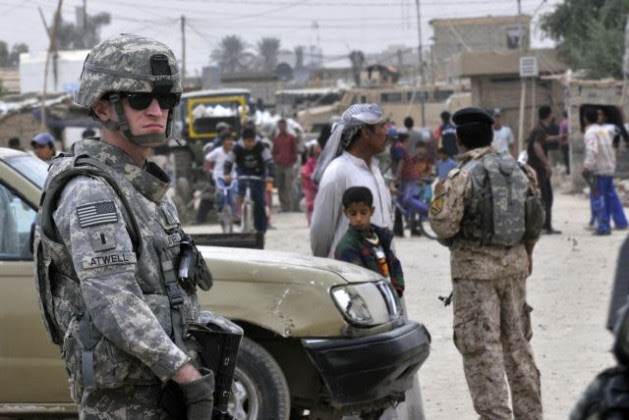 A U.S. soldier stands watch at the Kindi IDP Resettlement Center near Baghdad, Iraq, Nov. 16, 2009. Credit: U.S. Navy Photo
AMSTERDAM/ROME, Jun 24 2019 (IPS) - As China rapidly replaces Europe and the USA as the key player in developing countries, the Western press is full of articles about the dangers of dealing with the Chinese.
China, it is said, is not liberal and not democratic and hence is not a trustworthy partner in strategic and economic matters. An often cited example is that of Hambantota – a strategically located port that was handed over by the Sri Lankan Government to the Chinese in lieu of repayment of loans.
Of course closely corresponding examples of what was done by western countries is not mentioned such as Diego Garcia. This is a strategically located island in the middle of the Indian Ocean. In the late 1960s the USA and United Kingdom forcibly removed the local population and established a miltiary base.
Acts like that of Diego Garcia are justified by the excuse that they were necessary to dafeguard democarcy and liberalism. The most glaring recent example for western countries going to war to defend democracy is in Iraq.
Diplomatic pressure, collusion, corruption and, when necessary, war are justified by the fact that these other societies have systems and values distinct from the liberal ones

The USA invaded Iraq to save democratic countries (read Israel) from Iraqi weapons of mass destruction, and to liberate the Iraqi people from an undemocratic regime. This narrative had strong resonance in Congress, in the Senate, in the popular media and among the general public and created a groundswell of support for the Shock and Awecampaign.


In a few weeks over 1,500 air strikes were launched against Iraq and almost 7,000 civilians were killed. A triumphant President Bush was able to proudly announce “Mission Accomplished” to an adulating public and pave the way to a second term in office.
An important question for developing countries is:  are these patterns of behavior aberrations in what are otherwise free, peaceful and caring societies; or are they an integral part of the political systems of these countries?
Would things be different if more leaders of the western world were like Justin Trudeau? Would things be different if Hilary Clinton had won the election instead of Donald Trump? Will things be different if the aggressive tendencies of the deep state and occult elites, such as the military-industrial complex, are harnessed by more democratic institutions? In order to answer this we need to look a little into the political philosophy and social consensus that underpins these societies.
Over the last two to three centuries, the values espoused by the Enlightenment – freedom, equality, dignity and independence – have come to dominate the political and socio-economical mainstream in Europe and the USA.
This classical liberalism was complemented by shared views on social justice, the welfare state, and a reliance on the free market for the allocation of a society’s resources.  The view that the liberal, democratic, free-market system is the best way to organize society is now widely shared in the West.
A somewhat deeper look suggests that aggression and exploitation are not an aberration but are very much part of western liberalism. In their critique to John Rawls’ liberal theory, modern political philosophers such as Charles W. Mills, Leif Wenar and Branko Milanovic point out that a liberal society is “a cooperative venture for mutual advantage” regulated by rules for advancing the interests “of those taking part in it”.
The practical manifestation of this is that the social commitment to liberal beliefs often tends to translate into a belief that if the system is under threat, or perceived to be under threat, it is legitimate to defend it against others – by violence when necessary.
As a result the values of peace, freedom and liberty, which are the pillars of western liberal society, tend not to be extended to countries outside this system. Diplomatic pressure, collusion, corruption and, when necessary, war are justified by the fact that these other societies have systems and values distinct from the liberal ones.
As in the case of the Iraq war, the 9/11 attacks and the perceived threat to democracy, and the western way of life, created an unprecedented wave of popular indignation.  It was considered more than sufficient cause to bomb Afghanistan back to the stone-age and to threaten other countries with a similar fate.
History abounds with similar examples where liberal societies have had no qualms about going to war with the excuse of bringing civilization, trade or democracy to other countries. In the same vein, western democracies have no second thoughts about making alliances with repressive and undemocratic regimes whenever it suited them.
The fact that western liberal societies are capable of colonialism and war does not mean that China is going to be a heaven-sent, or that developing countries should abandon our progress towards liberal values such as tolerance, freedom and equality. However, it does mean that they should not get swayed by the anti-China rhetoric of the western press but take a pragmatic approach way for the good of the country.
Leila Yasmine Khan is an independent writer and editor based in the Netherlands. She has Master’s in Philosophy and a Master’s in Argumentation and Rhetoric from the University of Amsterdam, as well as a Bachelor’s Degree in Philosophy from the University of Rome (Roma Tre).
Daud Khan a retired UN staff based in Rome. He has degrees in economics from the LSE and Oxford – where he was a Rhodes Scholar; and a degree in Environmental Management from the Imperial College of Science and Technology.