Looking to the Land in the Climate Change Race 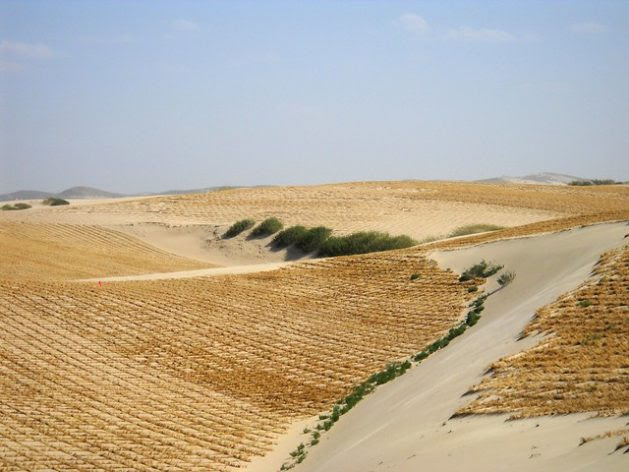 As the world’s soils store more carbon than the planet’s atmosphere, the restoration of soil and degraded land is therefore essential in the fight against climate change with a potential to store up to 3 million tons of carbon annually. Pictured here is a 2012 reclamation project of desertified, sandified land on either side of the Sudu desert road in Wengniute County, China. Credit: Manipadma Jena/IPS
UNITED NATIONS, Jun 26 2019 (IPS) - The international community still has a long way to go to chart a new, sustainable course for humanity. But the upcoming climate change meetings provide a renewed opportunity to tackle climate change head on.
Ahead of the United Nations Climate Action Summit in September, governments are gearing up to convene in Abu Dhabi for a preparatory meeting Jun. 30 to Jul. 1. The meeting is expected to have the highest official international participation since the Paris Agreement in 2015.

“This summit is a unique opportunity to make sure that climate is not perceived as an environmental issue…the summit allows us to bring climate into the overall agenda of development of a country,” said Special Envoy of the Secretary-General on the Climate Summit, Luis Alfonso de Alba.
“I think that’s the only solution for the climate. As long as we keep climate as an environmental issue, we will never achieve the level of transformation that is needed to deal with the problem and particularly to move to a different way in which we consume and produce as a society,” he added.
During the Abu Dhabu climate meeting, governments will make concrete proposals for initiatives on various climate change related issues from finance to energy. An agenda, recommendations, and draft resolutions will then be presented and adopted during the September summit.
In recent years, the climate change debate has been largely focused on energy, particularly the use of fossil fuels. Most recently, European Union (EU) leaders failed to reach a consensus on how to make the EU carbon neutral by 2050 as coal-reliant countries rejected the proposal. This sparked protests across the continent, including a 40,000-strong rally at a German coal mine.
U.N. Secretary-General António Guterres also called for an end to new coal plants after 2020 as well as fossil fuel subsidies.
While such moves are essential to reduce greenhouse gas emissions, sustainable land management is another crucial aspect that is often overlooked.
According to the U.N. Convention to Combat Desertification (UNCCD), the land use sector represents almost 25 percent of total global emissions. As the world’s soils store more carbon than the planet’s atmosphere, the restoration of soil and degraded land is therefore essential in the fight against climate change with a potential to store up to three million tons of carbon annually.
Agroforestry could be an essential tool to address land degradation and help communities to mitigate and adapt to climate change.
A land management system where trees and shrubs are grown together with crops and pasture, agroforestry has been found to provide numerous benefits including improved soil and water quality, increased biodiversity, high crop yields and thus incomes, reduced greenhouse gas emissions, and increased carbon sequestration.
In Niger, agroforestry has helped restore five million hectares of land through the planting of 200 million trees. This has resulted in an additional half a million tons of grain production each year, improving climate change resilience and food security of an estimated 2.5 million people.
Such sustainable land management is therefore a potential low-hanging fruit for achieving nationally determined contributions (NDCs) under the Paris Agreement.
Already, 40 percent of developing countries propose agroforestry as a measure in their NDCs, including 70 percent of African countries.
However, current commitments for long-term climate action remain insufficient as it covers only one-third of emissions reductions required by 2030.
In fact, U.N. Special Rapporteur on extreme poverty and human rights Philip Alston that even if current targets are met, the world is still at risk of a “climate apartheid” where the wealthy are able to pay to escape heat and hunger while the rest is left to suffer.
“Maintaining the current course is a recipe for economic catastrophe,” the U.N. expert said.
“States have marched past every scientific warning and threshold, and what was once considered catastrophic warming now seems like a best-case scenario. Even today, too many countries are taking short-sighted steps in the wrong direction,” Alston added.
De Alba echoed similar sentiments regarding the uneven commitment to climate action, stating: “If we are dealing and trying to improve the transition of energy, if we are concerned about land degradation and the protection of the forests, if we are all looking into innovation—I think we are all working for climate change whether we label it that way or not.”
Countries must therefore not only scale up their commitments, but also address and close existing gaps.
For instance, the Consultative Group on International Agricultural Research (CGIAR) found that agroforestry is not included in countries’ measurement, reporting, and verification (MRV) systems, including the U.N. Framework Convention on Climate Change’s (UNFCCC) own systems.
If agroforestry remains excluded from MRV, its contributions to national and international climate objectives will remain invisible.
“If agroforestry trees aren’t counted in MRV systems, then in many ways they don’t count. Only if agroforestry resources are measured, reported and verified will countries gain access to the financial and other support they need to effectively include agroforestry in climate change adaptation and mitigation,” CGIAR said in a study, recommending the creation of guidelines for agroforestry reporting.
De Alba stressed the need for the international community to act quickly.
“Fighting climate change is compatible with growth, compatible with the fight against poverty…it is important that we continue the work from Abu Dhabi into the summit to get the best results.”