Print | Send by email
Caroline Gluck is Senior Regional Public Information Officer, UNHCR, the UN refugee agency. She is based in Bangkok, Thailand 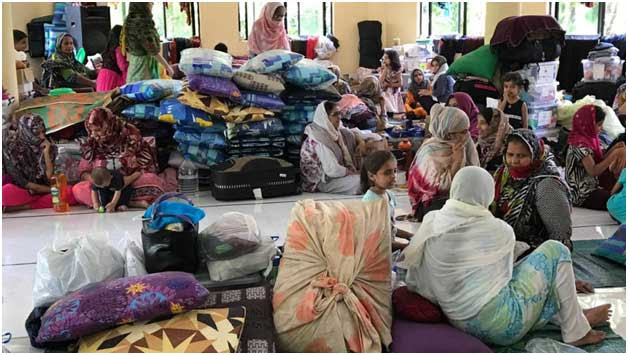 The Amadiyya community centre in Pasyala hosts refugees and asylum seekers forced to leave their homes since the April 21 attacks in Sri Lanka. Credit: UNHCR/Caroline Gluck
NEGOMBO, Sri Lanka, May 31 2019 (IPS) - Thirteen-year-old Bariea, a Pakistani asylum seeker in Sri Lanka, is taking shelter at a mosque in the city of Negombo, where an uneasy mix of high anxiety and extreme boredom hover over the room.
“We just have a few small bags, mostly clothes,” said Bariea. “We thought we would only be here for a few days. But now it’s been weeks.”
“We want to leave. We don’t feel safe. Pakistan wasn’t safe either …. I know many people were killed and injured. But it was not our fault.”
Around 1,000 refugees and asylum seekers like Bariea, most from Pakistan, some from Afghanistan, have sought shelter in mosques and police stations in Negombo and Pasyala, near the capital Colombo, for the past month.
While many from the local community stepped in to try and help, they were driven out of their rented homes by others who accused them of being connected to bomb attacks on churches and hotels around the country on April 21 that killed 250 people and injured many more.
As they shelter in the city, which was the site of one of the church attacks, UNHCR, the UN Refugee Agency, is working closely with Sri Lankan authorities to find more suitable, temporary places to move the families so they can live in dignity and safety during this difficult time. But in the climate of fear following the attacks, it has not been easy.
Some of the people displaced from their homes in Negombo have already moved to safer areas. More will be relocated in the coming days.
Family’s like Bariea’s, who sought safety in Sri Lanka after fleeing violence, persecution, and extremism in their own countries, say they were made scapegoats. Bariea has not only had to leave her home with her family to shelter in the crowded mosque but, with her two brothers, forced to drop out of class.
“I really miss school; I worry about getting behind in class. Education is my future. I don’t think I can go to school now,” she says. 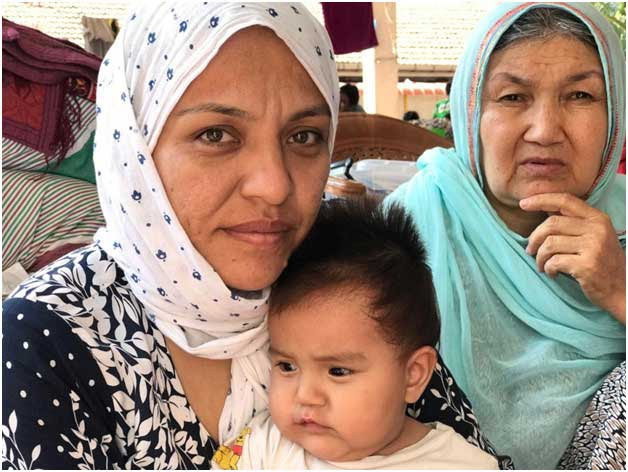 Afghan mother Anisa and family shelter with over 100 other refugees and asylum seekers at the police station in Negombo, Sri Lanka. Credit: UNHCR/Caroline Gluck
Her mother, Sehrish, 34, has many other worries. Her children have all been sick with coughs and fevers, and she is six months’ pregnant, like several women in the mosque and she is unable to sleep properly in the confined space.
She said she was grateful for the help they have received from UNHCR, its partners and local Sri Lankan groups, but also worried about what will happen next. “We are getting assistance but we cannot live here for much longer,” she says.
“People have been generous. Some groups have come and provided us with food and clothes.”
UNHCR’s head of office in Sri Lanka, Menique Amarasinghe, said: “Our top priority is to make sure these people are safe and well-protected, and to ensure they can access basic services.
“We’ve been extremely grateful to the Sri Lankan government who have acknowledged their responsibility to care for these people and have been doing everything they can in really very difficult circumstances.”
UNHCR has reinforced its staffing in Sri Lanka to respond to the emergency. It is working with the authorities and partner agencies to provide food, medicine, hygiene material, water and sanitation, and other basic support to refugees and asylum-seekers.
A short drive away from the Amadiyya mosque, around 100 Pakistanis and Afghans are sheltering in the semi open-air car park at Negombo’s police station. The police have provided security and assistance, but facilities are inadequate, with just a handful of toilets shared by the police and new arrivals.
It is so hot, that most people have broken out in skin rashes and their arms and legs covered in infected mosquito bites.
While some in the local community reacted in anger after the attacks, other Sri Lankans have rallied round the refugees and asylum seekers who they counted as neighbours.
“People have been generous. Some groups have come and provided us with food and clothes. Sri Lankan people have helped us,” said Anisa, an ethnic Hazara from Afghanistan, nursing her six month old daughter.
She has lived in Sri Lanka for four years and says people were friendly – but the attacks changed everything. “The owner of our house told us we could stay, but the neighbours said no. He said he wouldn’t be able to protect us, so we came here, a safe place.” Her niece, a confident English-speaker, 12-year-old Sadaf, chimes in.
“After the blast, people blamed us and hated us. It made us really upset.”
Sadaf used to study at a school supported by UNHCR. But right now she cannot go back to class. “I learnt lots of things. I need school for a better future and now I can’t go … it makes me sad. I think I won’t have a good future. Children like me are worried.”