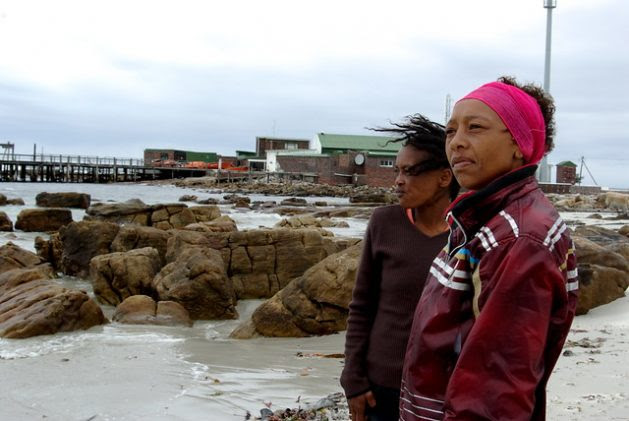 Women in the fisheries sector are largely concentrated in low-skilled, low-paid seasonal jobs without health, safety, and labor rights protections. Pictured here are Rita Francke and another fisherwoman at a jetty, in front of the old crayfish factory at Witsands, South Africa. Credit: Lee Middleton/IPS
UNITED NATIONS, Jun 7 2019 (IPS) - Our oceans play a major role in everyday life, but they are in grave danger. To protect the ocean, we must look to a crucial, largely overlooked component: gender.
For World Oceans Day this year, which occurs every year on Jun. 8, the United Nations and the international community is shining a spotlight on the intersections between the ocean and gender—an often underrepresented and unrecognised relationship.

“Gender equality and the health and conservation of our oceans are inextricably linked and we need to mainstream gender equality both in policies and programs and really in our DNA,” UN Women’s Policy Analyst Carla Kraft told IPS.
Founder of Women4Oceans Farah Obaidullah echoed similar sentiments to IPS to mark the occasion, stating: “It’s a great step that the UN is recognising the importance of addressing gender when it comes to achieving healthy oceans. You can’t achieve healthy oceans without achieving gender equality.”
Women make up approximately 47 percent of the world’s 120 million people, working in fisheries around the world, outnumbering men both in large-scale and small-scale fisheries.
However, women in the fisheries sector are largely concentrated in low-skilled, low-paid seasonal jobs without health, safety, and labour rights protections. In fact, women earn approximately 64 percent of men’s wages for the same work in aquaculture.
At the same time, women’s contributions both towards ocean-based livelihoods and conservation efforts remain invisible.
“There’s a disproportion valuation or recognition of women’s work and skills in marine and coastal development and ocean and marine resources,” Kraft said.
“Women’s economic empowerment is very much related to ocean activities and resources so it’s really about having gender equality as both a goal and a process through which we can conserve, preserve, and use the ocean in economic activity,” she added.
As ocean degradation and climate change deepens, women are left with even less access to economic resources, protection, and stable livelihoods, which thus exacerbates gender inequalities.
According to UN Women, women and children are 14 times more likely to die or get injured in natural disasters due to unequal access to resources.
While women’s political participation is increasing, Obaidullah noted that women are still left out of the table in decision-making and lack recognition around fisheries and ocean governance, telling IPS of her own experiences as an ocean advocate.
“It’s difficult—sometimes it’s because I’m a woman, sometimes it’s because of my ethnic background—to have my voice heard in certain settings. I’ll go to a conference and try to talk about serious topics with fellow delegates but [only to] be put down,” Obaidullah told IPS.
“I have seen how women have left the conservation movement and academia because of being in the minority in the fields that they work. And that has to change because we are losing out on all this capacity, intelligence, and training because of the inequality in this sector,” she added.
For instance, UN Women found that in Thailand men make 41 percent of decisions compared to 28 percent by women regarding fish farming. Such decisions are often related to establishing farms, business registration, feeding, and dealing with emergencies.
Obaidullah highlighted the need to empower  and support women across the globe to ensure sustainable ocean governance, including at the UN.
“Bringing in different voices from different backgrounds and from different genders is essential if we are going to set a healthier course for humanity…. we need to be making role models across geographies, across cultures if we are to get people motivated and inspired to take action for the ocean,” she said.
“There are a lot of women and people from different cultures and countries that are really on the ground fighting the fight for our ocean but they don’t get the spotlight.” 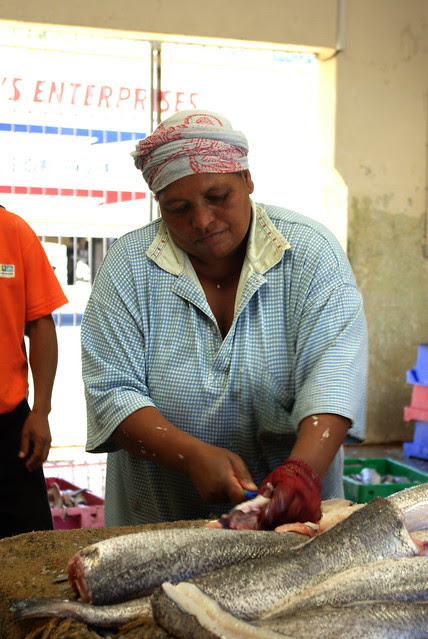 Women make up approximately 47 percent of the world’s 120 million people working in fisheries around the world, outnumbering men both in large-scale fisheries and small-scale fisheries. Credit: Lee Middleton/IPS
Already, the work towards inclusive conservation has begun.
In Seychelles, numerous organisations have put women and youth at the centre of efforts. One such organisation is SOCOMEP, a woman-run fisheries quality and quantity control company.
In Kenya, women are promoting conservation education within the mangrove forests through the Mikoko Pamoja mangrove conservation and restoration project, helping contribute to ecotourism, better health care and education while generating an income.
Kraft pointed to the need for data as the intersections between gender and the ocean still remain unexplored.
“One of the biggest issues right now that we have is the lack of sex-disaggregated data so it makes it harder to make really adequate policy responses when we don’t know the exact status of where women are in the economic activities in ocean and marine-related fields,” she said.
At the end of the day, the international community must also recognise that gender is related to and should be mainstreamed through all sectors.
“We have gone too long without having a gender lens really used for all of these policymakers…gender equality will benefit sustainable ocean governance and sustainable ocean governance with a gender lens will contribute to gender equality and women’s economic empowerment,” Kraft said.