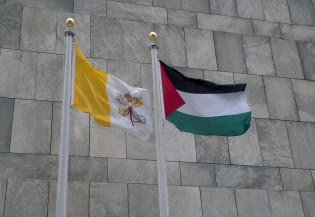 No to Palestinian Peace Envoy: US to UN

By Lyndal Rowlands
The failed appointment of former Palestinian-Prime Minister Salam Fayyad as the UN’s peace envoy to Libya has shown that divisions over Palestine still run deep at the world body.

By Andy Hazel
Antonio Guterres of Portugal officially took up his position as ninth Secretary-General of the United Nations Tuesday morning, beginning his duties by addressing UN staff in New York.

By Lyndal Rowlands
Achieving gender equality in UN staff appointments will be a "clear priority" for incoming UN Secretary-General Antonio Guterres, when he takes up the UN’s top administrative role in January 2017.

By Lyndal Rowlands
The 15 members of the UN Security Council jointly announced Wednesday their decision to select Antonio Guterres of Portugal as the ninth Secretary-General of the United Nations.