Washington and Beijing are slapping each other with tit-for-tat tariff threats, with US President Donald Trump proposing another escalation of the dispute late on Thursday. Here is a timeline of events. 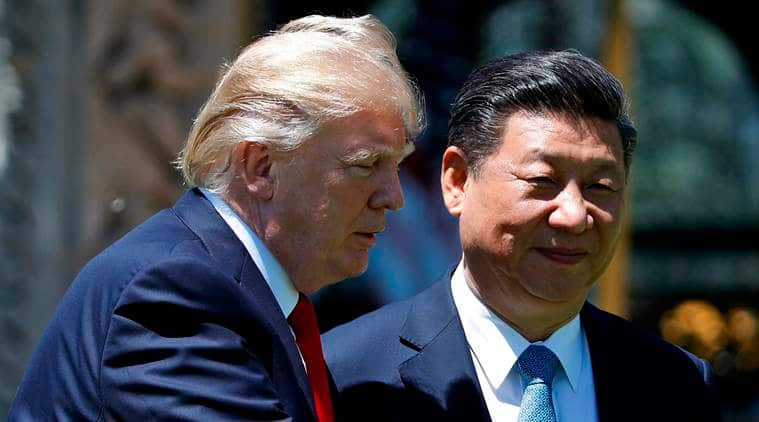 US President Donald Trump with Chinese President Xi Jinping (AP Photo/Alex Brandon, File)
Washington and Beijing are slapping each other with tit-for-tat tariff threats, with US President Donald Trump proposing another escalation of the dispute late on Thursday. Here is a timeline of events.
March 8: Trump announces import tariffs of 25 percent on steel and 10 percent for aluminum, but exempts Canada and Mexico and offers the possibility of excluding other allies.
March 18: Forty-five US trade associations representing some of the largest companies in the country urge Trump not to impose tariffs on China, warning it would be “particularly harmful” to the US economy and consumers. The group includes the US Chamber of Commerce, the National Retail Federation and the Information Technology Industry Council.
April 1: China increases tariffs by up to 25 percent on 128 U.S. products, from frozen pork and wine to certain fruits and nuts, escalating the dispute in response to U.S. duties on imports of aluminum and steel. The tariffs were slated to take effect on April 2.
April 3: Trump raises the stakes, proposing 25 percent tariffs on some 1,300 industrial technology, transport and medical products to try to force changes in Beijing’s intellectual property practices. The products represent about $50 billion of estimated 2018 imports.
April 4: China announces it will impose additional tariffs of 25 percent on 106 U.S. goods including soybeans, autos, chemicals, some types of aircraft and corn products and other agricultural goods. The products targeted by the tariffs were worth $50 billion in 2017, according to a separate statement from the commerce ministry.
In Washington, White House spokeswoman Sarah Sanders notes the tariffs did not go into effect immediately and says she hopes China will change its “unfair trade practices” in a way that will avoid the need for the Trump administration to move forward with announced import tariffs.
April 5: The World Trade Organization says China sought consultations with the United States, the first step in a WTO dispute, over Washington’s announced tariffs on the $50 billion worth of Chinese imports. The notification to the Geneva-based watchdog triggers a 60-day deadline for the two sides to settle the complaint or face litigation at the WTO by a neutral panel of arbitrators.
Trump says he has instructed U.S. trade officials to consider $100 billion in additional tariffs on China. In a statement, he announces the US Trade Representative has determined that China “has repeatedly engaged in practices to unfairly obtain America’s intellectual property.”
For all the latest World News, download Indian Express App
Publicado por salud equitativa en 5:50