Tens of thousands detained in China’s Xinjiang, US diplomat says | The Indian Express

Tens of thousands detained in China’s Xinjiang, US diplomat says | The Indian Express

Tens of thousands detained in China’s Xinjiang, US diplomat says

China routinely denies repression in Xinjiang and officials do not publicly acknowledge the existence of mass detentions at the region's network of political re-education centres. 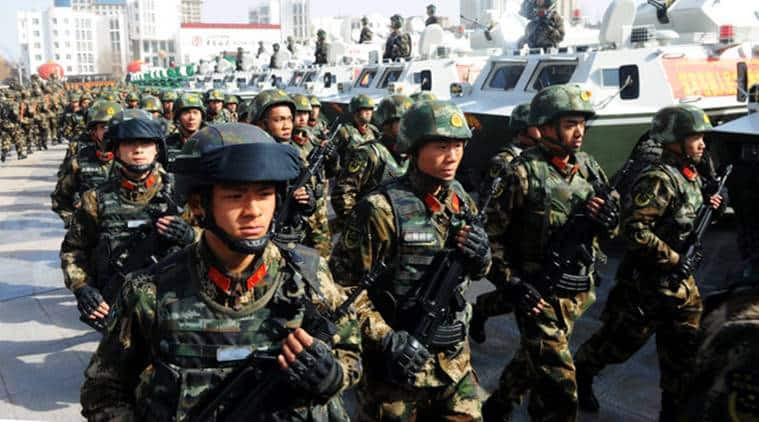 Paramilitary policemen stand in formation as they take part in an anti-terrorism oath-taking rally, in Kashgar, Xinjiang Uighur Autonomous Region, China. (Source: REUTERS/File)
Tens of thousands of people have been detained in China’s troubled far-western region of Xinjiang, a senior US State Department diplomat said on Wednesday, amid a deepening crackdown on Uighurs and other Muslim minorities in China.
Laura Stone, the Acting Deputy Assistant Secretary for East Asian and Pacific Affairs, told reporters in Beijing that the mass detentions in so-called political re-education centres “paints a disturbing picture” and called on Chinese authorities to have a “more transparent and accountable system”.
“We are troubled by the Chinese efforts to clamp down on the legitimate rights of Uighurs and other Muslims in Xinjiang,” she said. “We will continue to raise our concerns with the Chinese government and call for legitimate due process in the detention of its citizens”.
She said the scarcity of information coming out of Xinjiang made it hard to derive authoritative numbers of those detained but that it was “at the very least in the tens of thousands”.
Local authorities have over the past two years overseen a dramatic escalation in security and surveillance across Xinjiang in an apparent effort to impose greater central authority and curb a spate of violent attacks China says has been perpetrated by Islamist separatists.
Rights groups and exiles say Chinese controls on religion, culture and freedom of movement in Xinjiang are heavier than ever, amid reports of widespread detentions, including for having travelled abroad or being adjudged to be too religiously devout.
US government-funded Radio Free Asia said in January more than 120,000 people were being held in re-education facilities in the southern Xinjiang city of Kashgar alone.
China routinely denies repression in Xinjiang and officials do not publicly acknowledge the existence of mass detentions at the region’s network of political re-education centres.
Asked about Stone’s comments, Chinese Foreign Ministry spokeswoman Hua Chunying said “everyone can see that people of all ethnicities in Xinjiang live and work in peace and contentment and enjoy peaceful and progressing lives”.
“We hope that the US or any others can objectively assess and view China’s situation and stop any form of interference in China’s internal affairs or any unjustified criticisms,” she said at a regular news briefing.
The Xinjiang government did not immediately respond to a faxed request for comment.
The US Congressional-Executive Commission on China led by Senator Marco Rubio published a letter this month urging US Ambassador to China Terry Branstad to visit Xinjiang and prioritize the issue of “mass surveillance and detention” of Uighurs.
The letter said that Uighurs have been “subjected to arbitrary arrest, egregious restrictions on religious practice and culture, and a digitised surveillance system so pervasive that every aspect of daily life is monitored”.
“There are credible media reports that as many as 500,000 to a million people are or have been detained in what are being called ‘political education centres’, the largest mass incarceration of a minority population in the world today,” the April 3 letter said.
For all the latest World News, download Indian Express App
Publicado por salud equitativa en 4:51