Telescope: We have been warned | The Indian Express

Telescope: We have been warned | The Indian Express

Telescope: We have been warned

On fake news rules, was Smriti Irani overreaching or a scapegoat? Does it matter? 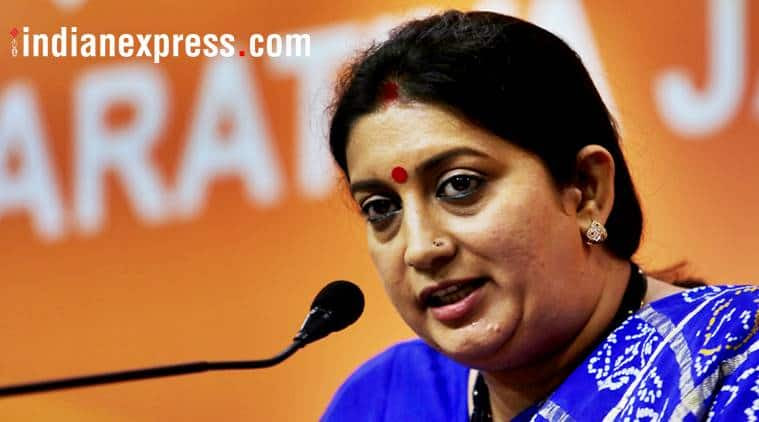 Union Minister Smriti Irani (Express Photo by Prem Nath Pandey/Files)
For a moment, back there, it seemed like fake news. What else could it have been? No one in their senses, or “not in tune with the sensitivities involved” as Republic put it diplomatically, who is also a member of the BJP, which constantly reminds the Congress of its Emergency assault on freedom of expression, would try to “muzzle the media” (India Today). Would they?
Well, she did. Smriti Irani, the once revered and much loved Tulsi, who fought to uphold the highest standards or morality and righteousness in the soap, Kyunki Saas Bhi Kabhi Bahu Thi, decided on Monday night that it was her righteous duty to wag a finger — now, now, naughty, naughty — and hand out “punishment” to the press for “fake news” (Times Now).
By next morning, TV news channels were swarming bees all over her in a “sting” operation that achieved the impossible: Rare unanimity amongst them that her press release announcing punitive measures for faked reports was not fake news — it was bad news. That there is a lot of questionable news across many news channels need not bother us right now: This was a unified call to arms in the #FakeNewsFight (News X).
Related News
Fortunately for the government but less so for the “over-enthusiastic” minister of information and broadcasting, as a journalist called her (N K Singh on CNN News 18), the prime minister realised that bad could only get worse if TV news was allowed to reach its normally shrill and deafening levels of outrage, and had the offending “diktat” as news anchors called it, withdrawn before the media could chew out the government over lunch, Tuesday afternoon.
PM Modi may well have emerged as the “hero” of the episode (Bhupendra Chaubey, CNN News 18) who had saved democracy (Times Now) — the news suggested the PMO was unaware of Irani’s intentions. BJP ministers and spokespersons who usually hold a press conference before something has even gone wrong, were inconspicuously absent. The most disingenuous explanation came from the BJP’s Naresh Taneja: The episode revealed the beauty of governance, NDA style, he said, “We are a democratic set up (in the government)… She (Irani) had that idea” and went ahead implementing it: “This shows democracy in the government. ministries are autonomous.” Well, retorted The Hindu’s N Ram, “if this is functional autonomy… (it is) stupid… ridiculous”. (News Today, 9 PM, India Today).
As journalist Sanjeev Srivastava rightly pointed out when Times Now’s Rahul Shivshankar asked if the government was “aware” at the highest levels of Irani’s move, what is worrisome was the “intent” of people in government on how to deal with “fake news”. Navika Kumar added that in government circles there was a “feeling” that the “menace of fake news needs to be tackled”. Hmmm.
Srinivasan Jain did a Reality Check on the controversy, and veteran journalist Arun Shourie made claims on the government’s “fake news”, which got BJP’s Vivek Reddy so incensed, he began to mix up names and bluster in a fluster (NDTV 24×7).
Ironically, a few days before Irani’s “misadventure” (CNN News 18), Republic TV went after the “fake arrest” by the Karnataka government of Mahesh Hegde, co-founder Postcard News for what else but fake news? A BJP Karnataka wallah bemoaned the “Hitler tactics” and Emergency-era actions of Congress CM Siddaramaiah. Of course.
Was Smriti Irani an “overreaching” minister or was she a scapegoat — and which was fake news? Or did the “truth” lie somewhere in between? And does it really matter? You decide. Just remember, we have been warned.
Interestingly, the news channels have been far more about news than views, recently: Protests against the leaked CBSE papers, the Dalit bandh on Monday, and the surge in fuel prices have seen some excellent spot reporting from all news channels.
In the case of the Dalit agitation, if you were really interested, by switching channels you could have witnessed the protests in Delhi, Mumbai, Patna, Arrah, Ranchi, Ghaziabad, Hapur, Punjab, Rajasthan, Madhya Pradesh, Gujarat — and heard what the protesters had to say.
The same goes for fuel prices as reporters visited petrol pumps across the country to listen to the hardship accounts of commuters, although the NDTV 24×7 reporter saying, “the common people seem to be the most hit” by the rate increase told us nothing at all about anything at all (Live Stream). Sadly, for the government, its announcement to appeal against the SC/ST (Prevention of Atrocities) Act ruling, and its explanations on the fuel front just barely made the news, that too as an aside to the main “common people” stories.
Arvind Kejriwal, on the other hand, couldn’t have been happier: His latest apology, this time to Finance Minister Arun Jaitley, barely flashed across the screen before the Dalit protests took over.
shailaja.bajpai@expressindia.com
For all the latest Opinion News, download Indian Express App
More From Shailaja Bajpai