Social Media: When bullying lasts beyond the school gates: “Now there’s no respite for victims” | In English | EL PAÍS

Social Media: When bullying lasts beyond the school gates: “Now there’s no respite for victims” | In English | EL PAÍS

When bullying lasts beyond the school gates: “Now there’s no respite for victims”

Online harassment among minors in Spain has increased by 65% in the last five years, amounting to 6,500 victims during that period 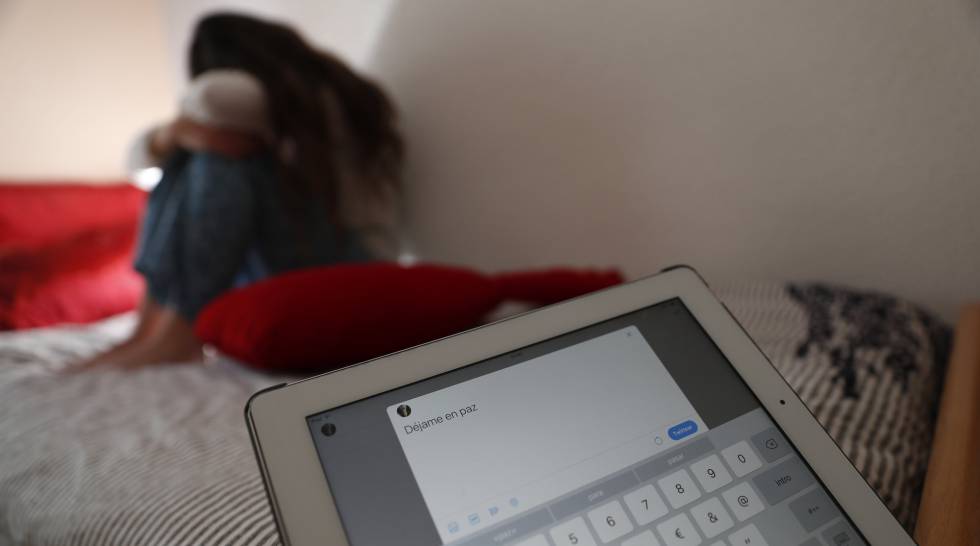 Bullying on social media.  LUIS SEVILLANO
Ana’s life became a living hell when she was 12 years old. First, it was a case of whispered insults and furtive shoves at her school in Pamplona, in northern Spain. Then the campaign really took off. “You disgusting whore. You’re so easy. You’re a slut,” shouted the ringleader. “Why don’t you just die! I don’t want to breathe the same air as you!” The campaign lasted four long years, during which time Ana found herself entirely alone as the bullies prevented other students from approaching her.
One humiliating episode involved Ana’s gym clothes being pulled from her rucksack and thrown in the air. “Watch out! The virus is contagious!” came the accompanying cry. Insults became a daily reality for Ana, who was persecuted even within the safety of her own home by text and on social networks.
Just 842 cases were reported in 2012 compared to 1,364 between January and October 2017
Cyber-bullying among minors has increased by 65% in the last five years in Spain. Just 842 cases were reported in 2012 compared to 1,364 between January and October, 2017, according to data from the  Interior Ministry’s Crime Statistics System. In total, the government has 6,500 cases on record from the last five years.
“Children are gaining access from an increasingly young age to very powerful weapons and a world without rules: the internet,” says Carmena del Moral, legal analyst for Save the Children, who insists that the extent of the problem is greater than the statistics suggest. “Many cases are not reported and remain under wraps. The extrapolation of the data implies that some 82,000 minors are being targeted.”
Del Moral published a study based on the personal accounts of 21,500 students between the ages of 12 and 16, in which 6.9% of young people admitted to having been cyber-bullied. According to her research, 4.2% of the victims believe they were victimized for their sexual orientation; 5% said it was due to the color of their skin or their religion; and 16% said it was down to their physical attributes.
WhatsApp, internet forums, social networks and emails are all useful tools for the cyber-bully and victimization has risen in direct proportion to their popularity. Cellphones have become the cyber-bully’s partner in crime.
According to a report titled “Digital Society in Spain 2017,” 86% of young people between the ages of 15 and 24 have a cellphone and use it for messaging (81.7%) and access to social networks (77.5%). “Compared to traditional bullying where children are in a safe environment when they get home, we are now up against a phenomenon that carries on 24 hours a day and seven days a week. There’s no respite for the victims,” says Del Moral.
Victims believe they were victimized for their sexual orientation or  due to the color of their skin or religion
Bullying, both virtual and in person, drove 16-year-old Arancha to commit suicide in Usera, Madrid in 2015, in a case that hit the headlines. “You slut, what are you saying about me? Fuck you! Give me €50 or I’m going to bring my cousins and more people to beat you up,” said one of the many messages she received from her tormentor.
“The cellphone is the most common tool for telematic bullying and WhatsApp is the most commonly used app, affecting 81% of victims,” according to a study carried out by the Anar Foundation, which also states that bullying on social networks accounts for 36.2% of cases and is a growing trend.
“Incidents of bullying happen more outside the classroom than in them, if that’s possible,” says the most recent report from the Attorney General’s Office, which expresses its concern over the escalation of the problem and the fact that many of the bullies are under 14 and too young to be penalized. “This is because access to new technology is happening at an increasingly early age.”

Researchers have found that cyber-bullying is also used to establish controlling relationships. “The most common incidents among Secondary [ESO] students are from anonymous people with false profiles who start to bully minors by asking for intimate photos of them,” says Diego Lucena, coordinator of a bullying-prevention project functioning in 10 High Schools and 18 Junior Schools in the Madrid region in collaboration with the Spanish Footballer’s Association (AFE).
In 2016, Ana was no longer able to cope with her situation at her school in Pamplona and left. The insults and attacks from her classmates had made her so anxious and depressed, she needed both therapy and drugs to overcome the trauma, according to the statement read out in court as her principal tormentor was sentenced to 14 months of probation and ordered to comply with a 300-meter restraining order.
English version by Heather Galloway.
English teacher suspended for mocking student exam on Facebook
Suicide victim’s school overcrowded and under-resourced, say parents
Argentine dad poses as 11-year-old daughter, beats up her sexual harasser
The anti-social networks
Publicado por salud equitativa en 5:49