Print | Send by email
UN Secretary-General António Guterres in an address to the Security Council
UNITED NATIONS, Apr 13 2018 (IPS) - The situation in the Middle East is in chaos — to such an extent it has become a threat to international peace and security.
The region is facing a true Gordian knot – different fault lines crossing each other and creating a highly volatile situation with risks of escalation, fragmentation and division as far as the eye can see with profound regional and global ramifications. 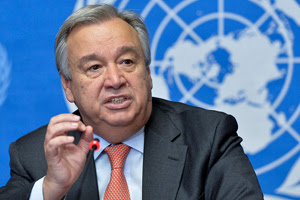 UN Secretary-General António Guterres. Credit: UN Photo
We see a multiplicity of divides. The first is the memory of the Cold War. But to be precise, it is more than a simple memory.