By International Organization for MigrationReprint |      | 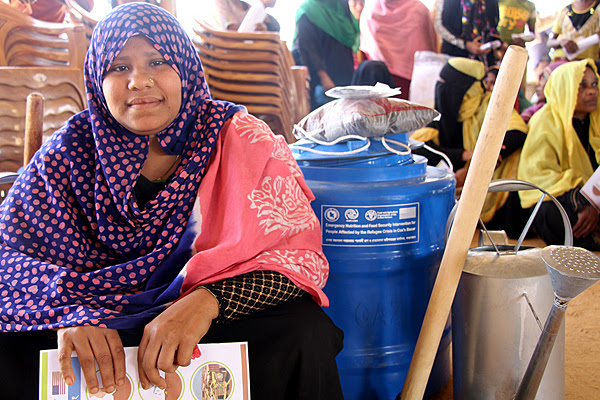 Almost 700,000 refugees have fled to Cox’s Bazar from Myanmar’s North Rakhine State in the past seven months. Many were already suffering from malnutrition due to poverty and discrimination in Myanmar. Now reliant on basic food rations of rice, lentils, cooking oil and spices distributed by aid agencies every two weeks, the refugees, particularly children under five years old, urgently need to diversify their diet. Local families also need access to more diverse and nutritious food.
The micro gardening initiative, which will provide seeds and tools to 50,000 families – 25,000 in the refugee camps and 25,000 in host villages in Ukhiya and Teknaf sub-districts – is part of a USD 3 million programme to promote home gardening and larger-scale production among local farmers. The initiative is funded by the US State Department’s Bureau of Population, Refugees and Migration (PRM). Almost half of the households receiving the kits are female-headed.
“In the coming months, we’ll be able to have leaves and vegetables regularly,” said 27-year-old Hamida, a young mother living in the Kutupalong-Balukhali mega camp with her husband and two children, who recently received a micro gardening kit. “Now we only eat them when we have money to buy them in the market. Otherwise we just eat rice and lentils or sometimes just rice with some chili and salt,” said Hamida.
“The kits mean that they (the refugees) can grow leaves and vegetables on whatever land they have around their shelters. They can also sell the extra produce,” said Mohammad Abul Kalam, Commissioner of Bangladesh’s Refugee Relief and Repatriation Commission (RRRC) in Cox’s Bazar, who handed over the first kits in the Ukhiya sub-district complex. “This will enable people to live better,” he added.
Local day labourer Rashid Ahmed, 48, agreed: “Buying leaves and vegetables regularly from the market isn’t possible. But we can have it almost every day if I grow it myself.” said Rashid, who is the only person earning money in his seven-member family. “It will bring in some money as well. I can earn at least 100 taka (USD 1.19) a week selling the extra produce,” he added.
As part of the kits, families received red amaranth, high-iron spinach, lady fingers, long yard beans and pumpkin seeds. They also got compost, a spade and a watering can. The kits include a watertight, 60-litre food storage drum to prevent mold and infestation of food stocks, which will be essential in the coming wet season. Local families received a slightly different kit, as most have bigger kitchen garden areas than the refugees. All the beneficiaries received basic training in micro gardening techniques.
“The initiative mainly focuses on providing high quality, nutritious food to improve nutrition at the household level, but also focuses on production capacity and farm-to-market strategies for farmer groups,” said Peter Agnew, FAO’s Emergency Response Coordinator in Cox’s Bazar. “We’re also introducing new technology to the communities, as it’s been successful in producing high-nutrition vegetables for the refugee population and providing some income generation for the host community.” FAO is implementing a five-year project with Bangladesh’s Department of Agricultural Extension (DAE).
“Seven months into the crisis, it’s not only the refugees, but also the host community that needs assistance,” said Manuel Pereira, IOM’s Emergency Coordinator in Cox’s Bazar. “The speed of the influx of refugees put huge pressure on local agriculture and the food supply chain. There are 400,000 people among the refugees and host communities who currently need nutrition support. This initiative will improve their nutritional status. It will also contribute to mitigating an expected 50,000 metric tonne annual food deficit in Cox’s Bazar,” he added.
For more information please contact IOM Cox’s Bazar:
Fiona MacGregor, Email: fmacgregor@iom.int, Tel. +880 173 333 5221
Shirin Akhter, Email: sakhter@iom.int, Tel: +880 341 52195