Kathua rape case: Is this the ‘nationalism’ that will now define the ‘Idea of India’? | The Indian Express

Kathua rape case: Is this the ‘nationalism’ that will now define the ‘Idea of India’? | The Indian Express

Kathua rape case: Is this the ‘nationalism’ that will now define the ‘Idea of India’?

Chief Minister Mehbooba Mufti has yet again failed to act by not taking any action against two of her BJP ministers. She allowed these individuals and their affiliated organizations to rally around the national flag – desecrate it, abuse it to shield demons. 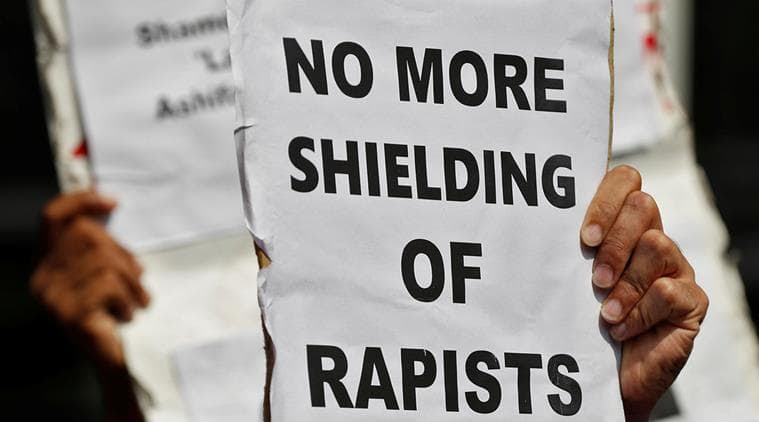 Written by Junaid Azim Mattu
While the belated national outcry over the horrific rape and murder of an eight-year-old child in Kathua grows – the incident took place in January — it would be yet another travesty of justice if we fail to acknowledge that her brutal rape and murder is anything but an isolated crime. The young child’s ordeal and that of her family is the accumulated manifestation of a deeply divisive political narrative in Jammu that has hinged on portraying the miniscule Gujjar-Bakerwal Muslim community as “encroaching” aliens.
For centuries, J&K’s nomadic communities have been non-controversial and inherently harmonious – co-existing peacefully across both parts of undivided Jammu & Kashmir with Hindus and Muslims alike. Despite repeated provocations, harassment by fringe groups affiliated to the BJP as well as brazen threats promising a repeat of the 1947 Muslim massacre in Jammu by none other than the figure of authority, BJP’s Chaudhary Lal Singh — these nomadic communities has never taken a violent, agitational course. They’ve barely protested.
Since 2014, nearly every single Ministry that was given to the BJP when it joined hands with the PDP -– including departments that provide essential services – have done something or the other to intimidate the nomadic communities in Jammu. Sometimes this has been done directly and at other times through proxy affiliates and propped up pressure groups. Their portrayal as “outsiders”, “land-grabbers” and “infiltrators” was an integral part of BJP’s campaign in parts of Jammu in 2014, a campaign that was the first of successive assaults on the State’s regional and religious harmony.
Rasana, the child’s village in Kathua, has all of four Muslims homes. Kathua district as a whole hardly has any Muslims, certainly less than five per cent of the population. But the severity of intolerance is such that the four homes in Rasana were seen as dangerous intrusions that would alter the region’s demography. Nearly a dozen FIRs with the J&K police document the persistent intimidation and harassment these hapless, helpless families underwent over the past few years.
So when two BJP ministers violated Section 144 and addressed a rally brought out in support of the rape accused by the ‘Hindu Ekta Manch’ — of which the alleged mastermind of the child’s rape, Sanji Ram, is an influential member — they unabashedly reiterated their abhorrent, divisive and paranoid politics that resulted in this crime in the very first place.
Chief Minister Mehbooba Mufti – yet again – failed to act by not taking any action against two of her Ministers. She allowed these individuals and their affiliated organizations to rally around the national flag – desecrate it, abuse it to shield demons. Had she conjured up the courage and the conviction to act when it mattered, Jammu and Kashmir wouldn’t have been on the brink of tumult that it is today.
When the child’s body was found three days after she was gruesomely killed — after she was starved and raped multiple times at the local Devisthan (of which Sanji Ram is the custodian), her shattered family was disallowed to bury her in Rasana – on a piece of land they OWN.
The same shameless, ruthless people who didn’t take umbrage as to how a local temple was desecrated by these heinous barbarians, considered the child’s burial in the village to be a desecration.
Today, an eight-year-old child lies in a grave as rapists rally around the national flag – alleging “discrimination” by the J&K Police, a police that has no parallels in the country in terms of the unimaginable sacrifices it has rendered.
The time has come to ask, of ourselves and the powers that be, whether it is this “nationalism” that will now define the ‘Idea of India’? Was her rape a rape at the altar of nationalism? Till we answer this resolutely and ensure these beasts are brought to justice, her eyes will haunt every conscientious soul – the fake nationalists and their Pied Pipers, first and foremost.
Junaid Azim Mattu is the state spokesperson of Jammu and Kashmir National Conference. He tweets @Junaid_Mattu
For all the latest Opinion News, download Indian Express App
© IE Online Media Services Pvt Ltd
Publicado por salud equitativa en 5:58