Towards the end of the last Parliament session, the Congress appeared at the forefront of the Opposition move to bring an impeachment motion against Chief Justice Dipak Misra. The Nehru Memorial Museum & Library (NMML)
Behind the Jawaharlal Nehru Museum in the Teen Murti complex there are three eternal flames (‘Jeevan Jyotis’) in memory of Pandit Nehru, Indira Gandhi and Rajiv Gandhi. But at present, all the flames are extinguished. The Director of the Nehru Memorial Museum and Library, Shakti Sinha, says the gas for the flames had to be turned off since it was a fire hazard, amidst a major renovation and revamping exercise on since last year at the complex. It is not clear if the Culture Ministry’s proposal to open a museum featuring all former prime ministers will be housed in the building in which Jawaharlal Nehru lived as prime minister or in another museum on the premises. Angry Congress-persons feel that by disconnecting the gas, the symbolism of the sacred flame has been sullied. They believe that if the Modi government had so desired, it could have made alternative arrangements.
Top News
Manmohan’s sway
Towards the end of the last Parliament session, the Congress appeared at the forefront of the Opposition move to bring an impeachment motion against Chief Justice Dipak Misra. The signatures of some 60 Rajya Sabha members were collected, but the Congress backed down at the last minute. The man who singlehandedly changed the party’s position was Manmohan Singh. When a senior Congress lawyer approached the former prime minister, who is normally a man of few words and seldom voices an opinion, he was firm that he personally would not like to sign the petition. Singh felt that it was not the Congress’s culture to undermine another democratic institution. He also felt that the move would not lead to any political gain. The party decided to shelve the move since it would have been embarrassing for the party if Singh’s signature was missing.
Incidentally, two Congress lawyers in the Rajya Sabha, P Chidambaram and Abhishek Manu Singhvi, were also reluctant to sign the motion, though a third party leader and lawyer, Kapil Sibal, was active in spearheading the campaign. Next to the Gandhi family, it is clearly Singh’s voice that carries the most weight in the party.
Book on way
As long as S Jaishankar was foreign secretary, there was a behind-the-scenes tussle between him and NSA Ajit Doval as to who had the ear of the Prime Minister on foreign policy, particularly on China and the US. When Jaishankar retired in January, it was presumed that Modi would co-opt him into an advisory role. The speculation was strengthened by the fact that two vacant rooms were available at Sardar Patel Bhavan, where many of Modi’s key advisers sit. At the moment, Doval’s supporters are triumphant assuming that Jaishankar has left the field clear for the NSA. Jaishankar is mostly in Singapore, where he is to teach at a university and write a book.
The two vacant rooms have been occupied by the deputy NSA and an NSA director. But Doval’s supporters should not be overconfident; it could be just a temporary cooling-off period for the former foreign secretary.
Now on small screen
Taking inspiration from Rajput protests against the movie Padmaavat, some Brahmin associations in Uttar Pradesh have objected to Ek Sangharsh, a TV serial said to be based on Baba Ramdev’s life. The lavishly produced serial, which began in February and is produced by Ajay Devgn Ffilms, portrays Ramdev, who was born in a Yadav family, and his mother as being frequently victimised by upper castes. The 85-part hagiographic biopic shows how Ramdev achieved success and fame by overcoming his caste handicap. The serial also goes on to show how, as a child, when Ramdev attended school, the Brahmins allegedly tried to prevent his entry. However, the caste protests against the serial have been largely muted and not caused any major ripples, unlike the case with Padmavaat.
Krishna in a spot
Rahul Gandhi and S M Krishna met at the Bengaluru airport last week and chatted cordially for a few minutes, leading to speculation that Krishna might be rejoining the Congress. But Krishna, who left the party last year as Karnataka Chief Minister Siddaramaiah reportedly ignored him, is unlikely to retrace his steps, even though he is given little importance by the state BJP. The joke in Karnataka is that the only post bestowed on Krishna by his new party is to make him a member of the party’s social media team, a subject on which he is clueless. Now the senior Vokkaliga leader is referred to jokingly as “Social Media Krishna”. Family friend Divya Spandana could have been in a position to advise him on the subject, but she heads the Congress’s national social media team.
For all the latest Opinion News, download Indian Express App
More From Coomi Kapoor 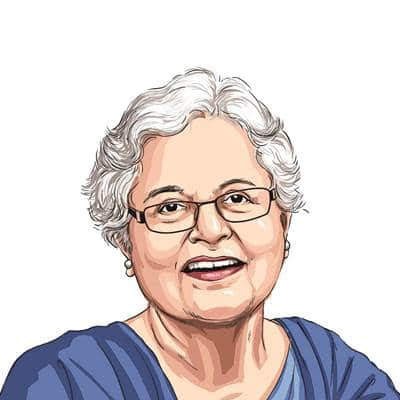