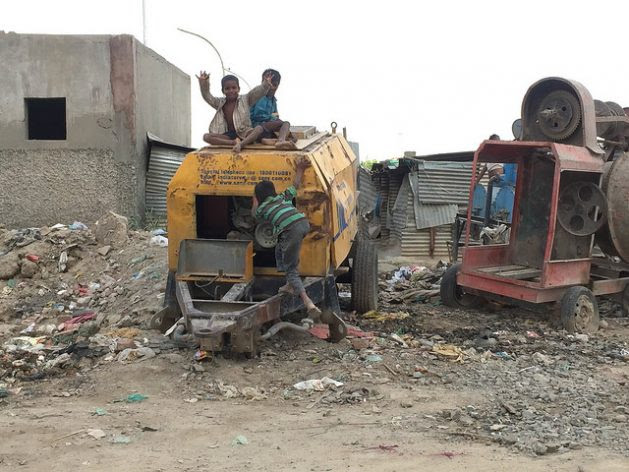 The Walk Free Foundation estimates that 45.8 million people, including millions of children, are subject to some form of modern slavery in the world. Credit: Neeta Lal/IPS
NEW DELHI, Apr 5 2018 (IPS) - The Indian Union Cabinet has cleared the long-awaited Trafficking of Persons (Prevention, Protection and Rehabilitation) Bill, which proposes an imprisonment of 10 years to life term for those trafficking humans for the purpose of begging, marriage, prostitution or labour, among others. The bill will become a law once cleared by both houses of Parliament.
In a pioneering move, the ambit of the proposed legislation transcends mere punitive action to encompass rehabilitation as well. It provides for immediate protection of rescued victims entitling them to interim relief within 30 days. There are specific clauses to address the victims’ physical and mental trauma, education, skill development, health care as well as legal aid and safe accommodation.
"If implemented, the law could have far-reaching benefits, like curbing the underground labour industry and ensuring that fair wages are paid." --High Court advocate Aarti Kukreja
The National Investigation Agency, the country’s premier body combating terror, will perform the task of national anti-trafficking bureau. A Rehabilitation Fund is also being created to provide relief to the affected irrespective of criminal proceedings initiated against the accused or the outcome thereof.
“It’s a victory of the 1.2 million people who participated in 11,000 km long Bharat Yatra (India March) for this demand,” Nobel Laureate Kailash Satyarthi said in a statement, referring to a month-long march he organised last year.
According to global surveys, human trafficking is the third largest organized crime violating basic human rights. The Australia-based human rights group The Walk Free Foundation’s 2016 Global Slavery Index points out that at a whopping 18.35 million, India leads the global tally for adults and children trapped in modern slavery.
Thousands of women and children are trafficked within India as well as well as neighbouring Nepal and Bangladesh. Some are enticed from villages and towns with false promises of gainful employment in the cities, while a large number of them are forcefully abducted by traffickers.
As trafficking is a highly organized crime involving interstate gangs, the bill proposes a district-level “anti-trafficking unit” with an “anti-trafficking police officer”, and a designated sessions court for speedy trials. The Bill also divides various offences into “trafficking” and “aggravated trafficking”. The former category of crimes carries a jail term of seven to 10 years while the latter can put the offenders in the clink for at least 10 years, extendable to life imprisonment.
Also, aggravated offences would include trafficking for the purpose of forced labour, begging, trafficking by administering chemical substance or hormones on a person for the purpose of early sexual maturity, trafficking of a woman or child for the purpose of marriage or under the pretext of marriage. The draft bill also moots three years in jail for abetting, promoting and assisting trafficking.

There is also a provision for a time-bound trial and repatriation of victims — within a period of one year from the time the crime is taken into cognisance.
According to the National Crime Records Bureau, 8,100 cases of trafficking were recorded in India in 2016 with 23,000 trafficking victims being rescued last year. However, experts say the figures fail to reflect the true magnitude of the crime. The actual figures, say activists, could be much higher as many victims do not register cases with the police for lack of legal knowledge or due to fear from traffickers.
India’s West Bengal state – which shares a porous border with poorer neighbours Bangladesh and Nepal and is a known human trafficking hub – registered more than one-third of the total number of victims in 2016. Victims were also trafficked for domestic servitude, forced marriage, begging, drug peddling and the removal of their organs, the NCRB figures showed.
Worsening the crisis are the growing demands of a burgeoning services industry in India which recruit the abducted without a system of proper vetting, say experts. This practise is directly responsible for the spiralling number of human trafficking cases reported in India. It is here that the new proposed law can go a long way in combating human trafficking.
“If implemented, the law could have far-reaching benefits, like curbing the underground labour industry and ensuring that fair wages are paid,” says High Court advocate Aarti Kukreja.
The Walk Free Foundation estimates that 45.8 million people, including millions of children, are subject to some form of modern slavery in the world, compared to 35.8 million in 2014, a concern that affects large swathes of South Asia. But significantly, there is no specific law so far to deal with this crime. Experts hope the proposed legislation will make India a pioneer in formulating a comprehensive legislation to combat the trafficking menace.
Currently, trafficking in India is covered by loophole-ridden laws that enables miscreants to give the law a slip. According to New Delhi-based social activist Vrinda Thakur, the new initiative’s comprehensive nature will help tackle trafficking more effectively.
“All previous legislation dealing with human trafficking treated traffickers as well as the trafficked as criminals. This was bizarre. It prevented the victims from coming forward to report the crime. However, as per the proposed new law, the first of its kind in India, victims will be offered assistance and protection,” elaborates Thakur.
As part of the government’s larger mission to control trafficking, some measures are already underway. An online platform has been created to trace missing children and bilateral anti-human trafficking pacts have been signed with Bangladesh and Bahrain. The government is also working with charities and non-profits to train law enforcement officers. The proposed new law will act as a force multiplier to take these efforts further.
Kukreja elaborates that the Bill has an in-built mechanism to eschew antiquated and bureaucratic legislature that currently bedevils law enforcement in India.
“It will unify existing laws, prioritise survivors’ needs and provide for special courts to expedite cases,” she says.
By whittling down human trafficking in South Asia and deterring traffickers with high penalties, labour practices will decline, giving abducted women and children the chance to better their future, contributing to the country’s economic and social development.