I Am a Migrant: Integrating Through Syrian ‘Hummus’ | Inter Press Service

I Am a Migrant: Integrating Through Syrian ‘Hummus’ | Inter Press Service 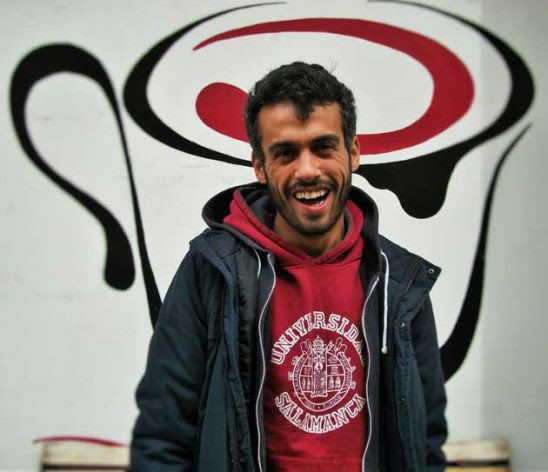 Khaled, 27 is one of the ten Syrian refugees working on the Hummustown project in Rome. Credit: IPS
ROME, Apr 4 2018 (IPS) - Khaled left Syria in 2015, when his country was already in its fourth year of war. He is 27 years old and can clearly remember what his life was like then in Damascus: a happy life, with a happy family, in a happy country.
Despite coming from a land now devastated by war, Khaled does not describe his days in Syria as negative ones. Even when he turned eighteen in 2008 and had to join the Syrian army, he was still leading a normal life like many other compatriots. In 2011, the Arab Spring erupted and that soon turned into a violent civil war. Everything changed and in 2015 Khaled was convinced that he had to leave to get some normalcy back in his life.
He first went to Turkey and then to Libya, where he had some relatives. He stayed there for one year.
“Living in Libya was not easy,” he says. “I remember myself and other people living in a continuous state of terror, worry and anxiety. You could be robbed, someone could point a gun at your head and you did not know if you were going to survive.”
He reached the Italian shores by sea, through the most dangerous route: The Mediterranean. When asked by IPS what that trip was like, he responds with a smile. “I slept. I was sleeping and smoking cigarettes all the time, for seven hours. Then some rescue boat came to help us and they brought us to the Italian shores.”
Today, Khaled is a migrant living in Italy with refugee status. He and other nine Syrian refugees are together building a new opportunity for their future. How? Through the preparation of of hummus.
In 2017, through an American-Israeli friend, Khaled met Shaza Saker, a Syrian woman who was raised in Italy and currently works at the Food and Agriculture Organization of the United Nations (FAO) in Rome. When they met in March 2017, Shaza had just started to organize informal dinners of Syrian cuisine in her house with some friends. Guests were paying for the food and the money raised was sent to Syria to help communities suffering from the war: it was pure charity.
Saker started to meet Syrian refugees coming in to Italy and had a unique inspiration. “I wanted to help more, and see the positive outcome with my eyes,” she says. “This is why I realized that a great tool to diminish my frustration with not being able to change the course of that drama in Syria was to help Syrians living here in Italy.
“These asylum seekers were coming to Italy without knowing a word of Italian and without a job or friends. I thought that giving them some activity to do that could even involve their own culture and could give them an income was a unique opportunity.”
When she started involving Syrian refugees in her Syrian dinners, Saker decided to create “Hummustown,” a cooperative today involving ten Syrian refugees who simply prepare hummus and other Syrian delights, and package and deliver them across Rome. Hummustown is substantially a catering service but definitely very original. The food is Syrian, the people cooking it are Syrians and those delivering it are Syrians.
But the people who eat and now love that food are mainly Italians. Indeed, the project is being appreciated across Rome and Hummustown grew fast in one year. The food stalls with Syrian food have been hosted at the headquarters of Rome-based United Nations agencies as well as in many celebrations and festivals across the city.
This team of Syrians now has an objective: to have their own outlet where they can cook in bigger quantities. This would allow the team to work more and earn a stable income. In Rome, having an outlet where one can cook is expensive. For this reason, a few months ago Hummustown launched a crowdfunding campaign on GoFundMe, where people from across the world are showing their incredible generosity. In a few months, donors multiplied and more than 23,000 euros came in as donations. The project needs more financial resources so Hummustown is still hoping for a clientele of Italians.
Italians are increasingly opening up to other exploring different cuisines. Through Hummustown, they are being introduced to new tastes that maintain the Mediterranean flavour, as the ingredients used are Mediterranean produce. We can safely say that cuisine and culture across the Mediterranean region, from Morocco, to Spain, and Egypt, Syria, Greece and Italy, have one unique heritage that links the tables of all the North African, Middle Eastern and European peoples when they sit down for lunch or dinner.
Despite the increase in some prejudices and attitudes across the country – earlier this year an Italian opened fire on immigrants in the centre of Macerata, and during the March 2018 elections, the far-right party Lega Nord obtained huge support for anti-immigration stance — there are many Italians who have an open-minded view on immigration and possible integration.
Saker confirms that many of the donors on GoFundme are Italians, even though there are also many others from countries such as Australia and the United States. “This means,” she says, “that people all around the globe, regardless of nationality, simply believe in this project and in the value it has.”
When I asked Khaled what he likes the most about working for this project, he replies, “The people: I enjoy being all the time side by side with other people, Italians and others.” 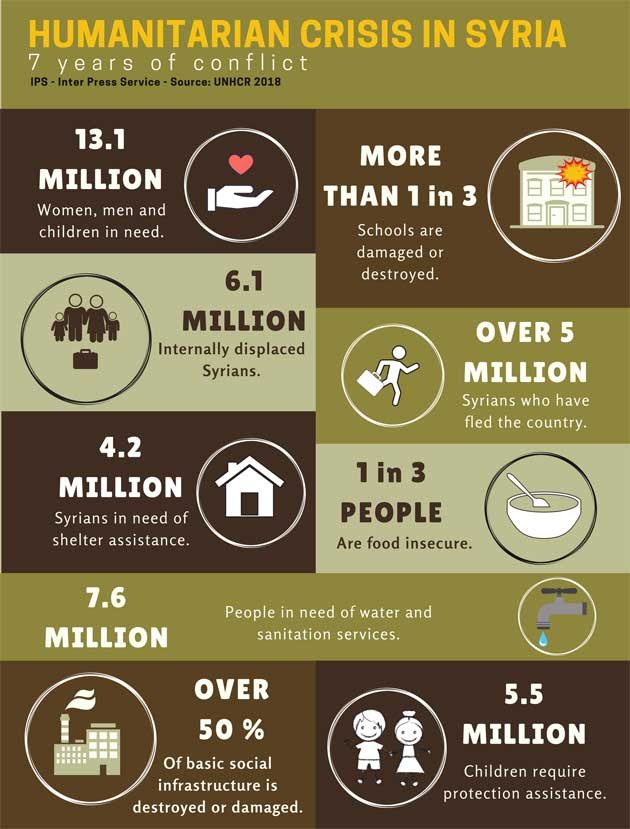 Humanitarian crisis in Syria. UNHCR, 2018.
Khaled does not hide the fact that what he and other refugees need most is obviously money. “We appreciate all the nice words people say to us but in the end, if we really want to feel integrated in this society we need an income that would make us independent and have a weight in Italian society. This is why Hummustown could really work wonders because it is a win-win situation for us Syrians and for the Italian clients and there is no reason for not supporting it.”
In March 2018, the war in Syria entered its eighth year. According to the International Organization for Migration (IOM), over 600,000 displaced Syrians returned home in the first seven months of 2017. The humanitarian crisis going on there is amongst the most dramatic and tragic in human history.
The United Nations High Commissioner for Refugees (UNHCR) says there are 13.1 million people in need in Syria, 6.1 internally displaced and over 5 million have fled the country to date. Of those Syrians still living in their home country, one in three is food insecure and 7.6 million people are in need of water and sanitation services. And it is still not over, as the war does not seem to be ending anytime soon.

I ask Khaled if he wishes to go back to Syria one day. He screams out loud: “Yes!” He has no doubt about it. “One day I want to go back to Damascus and rebuild with my people what has been broken during the past years and go back to my happy life in my happy country.”