Flames in the forest | The Indian Express

Flames in the forest | The Indian Express

Flames in the forest 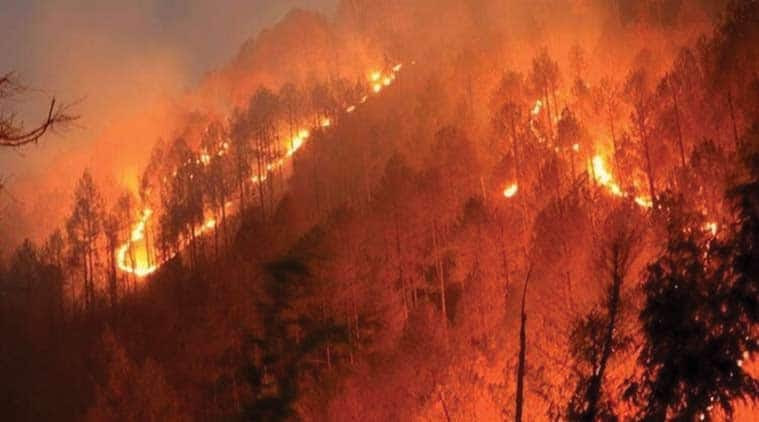 A view of the Uttarakhand forest burning
Have you ever seen trees, hundreds of years old, being engulfed in flames? A fire that destroys the entire ecology of our beloved mountains like a monster, from the riverside to the top? If you live in the Himalayas, you must have seen this disheartening sight many times. As in many other regions of the country, forests are simply vanishing from the Himalayas, and fires are a major cause.
Is it necessary to mention the consequences of vanishing forests in one of the largest mountain ranges in the world? We are (un)consciously aware that to intentionally burn a forest is a crime towards Mother Nature, and hence towards us. It is a suicidal act, as many aspects of our existence — health, economy, food, water, leisure and even the air we breathe — are dependent on forests.
Another fact, rarely mentioned or even agreed to, is that a majority of these fires are set intentionally. The Great Himalayan National Park, a protected area in Kullu, and the Tirthan valley are unfortunately no exceptions to this rule. Interns and researchers from Himalayan Ecotourism approached local communities in the region and discussed the matter with them. Our first understanding is that very few villagers are interested in discussing this issue. Forest fires keep people of all backgrounds mute and hopeless. When people started talking, they told us about the local belief: “The fires generate smoke which goes up and reaches the eyes of God, because of which God starts crying and his tears fall back on Earth in the form of rain.”
The researchers felt this story was a somewhat diplomatic way to avoid digging into the problem. Eventually, the villagers admitted that the forest fires are mostly intentional. Burning forest lands is an environment management practice carried out by villagers in order to enhance their livelihoods. Fires clear the forest land of “unwanted” bushes and let good grasses grow for their cattle. This gives the villagers easy access to many forest resources that can be turned into income. An example is the gucchi (Morchella Esculenta), a mushroom with a very high selling price, which is known to grow well on burnt forest land. The forests burned for such purposes are usually rich ecosystems.
Of course, this perspective is wrong when time as a factor is considered. Natural resources are being consumed for insignificant short-term benefits and a jeopardised future. Are the villagers aware of this? Yes, to a certain extent. And so, forest fires are a shame which weighs heavily on everyone. There is also a lack of awareness about how smoke from these forest fires increases the CO2 levels in the atmosphere, contributing to climate change, adversely affecting the local climate. The same goes for how depleted forest ecology has an adverse impact on agricultural production. So, raising awareness is definitely something we can do to fight forest fires.
However, while raising awareness may increase the social pressure on those who set these forest fires, the situation is unlikely to change significantly unless there are alternatives. While such alternatives exist, none are as easy as setting a fire in a forest or to the fields. Villagers have to be informed about innovative practices and technologies that can take them away from intentional forest fires without having to substantially increase their work.
Efforts towards raising awareness and community mobilisation will be helpful, but there is another issue that may condemn any effort to failure — the ownership of forests. Villagers believe that the future of the forests is in the hands of government officers and not their own. In this context, a wrong mindset is encouraged. Villagers have a tendency to take whatever they can from the forest before the government takes it.
We need to promote the idea that the forests belong to all people. Their conservation is necessary for the whole of mankind and for this world to survive. We need to raise awareness, empower women, increase access to knowledge, introduce green technologies and bring in resource-friendly income-generating activities.
Whatever alternate practices are promoted, it is crucial to keep lands for the forest to grow, protected from fires. We have come across a few individuals in rural areas who actively inform the local authorities and the National Green Tribunal through its online portal (http://ngtonline.nic.in/ngtonline/ homePage.action) about such fires and have received a quick response. The care and concern for the environment as shown by such individuals should be ingrained in all of us. With the help of mobile applications, SMS or through the website, citizens can help track forest fires whenever they occur and bring them to the attention of local authorities, who can then take appropriate steps.
This battle has to start somewhere. A forest fire, whenever it occurs, should bring about the kind of ground-level response we see in case of earthquakes or floods. To tackle this issue, the officers at the ground level can work together with the public to bring about a holistic solution. Through a concerted effort, we may halt this fire which is engulfing our forests, harming our wildlife and making the once “pure” Himalayan air toxic.
Devgan is an IAS officer and Marchal is a rural development consultant and founder of Himalayan Ecotourism
For all the latest Opinion News, download Indian Express App
Publicado por salud equitativa en 5:33