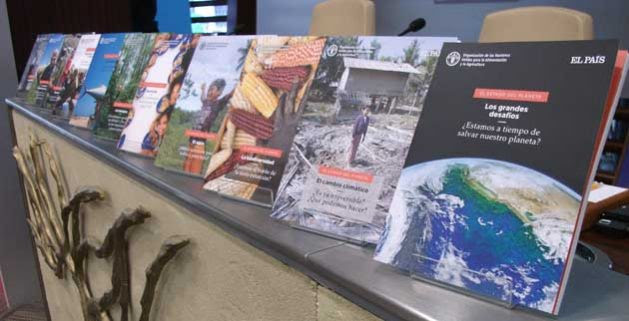 The series of 11 books launched today by FAO and El País, in Rome. Credit: Maged Srour / IPS
ROME, Apr 20 2018 (IPS) - Today the Food and Agriculture Organization (FAO) hosted an event at its headquarters in Rome, to present a set of eleven books jointly realized in collaboration with the Spanish newspaper El País.
“El Estado del Planeta” (“The State of the Planet”) is a unique series of 11 books that will be published one at a time each week starting from Sunday 22 April, 2018. The books aim to raise awareness on the most urgent challenges faced by humanity today and in the near future ranging from climate change to food security; protection of biodiversities to sustainable cities.
It is an “unprecedented editorial effort”, said Juan Luis Cebrián, President of El País who, together with Antonio Caño, Director of El País, René Castro Salazar, FAO Assistant Director General Climate, Biodiversity, Land and Water Department and Enrique Yeves, FAO Director of Communications presented the editorial product to a large gathering of experts and diplomats attending the event at the Sheikh Zayed Centre at FAO headquarters.
During the event, speakers from FAO and EL País highlighted the excellent partnership between the two organizations that made this possible. The collaboration has led tp to the creation of a network of 250 collaborators working on the ground.
The series of books aim to be simple and comprehensive tools. that are full of infographics and images. Yeves explained that the team of 250 researchers in the field were able to gather a multitude of reliable data. “This data is explained well and it is comprehensible for everyone: it’s for the great audience” added Yeves. “At the same time, the large amount of sources cited in the bibliography is a precious tool for all those experts working on these issues who might need reliable analyses and sources” stated FAO Director of Communications.
“Our society is still not quite aware and we need to amplify these problems. The newspapers are not fulfilling their job of communicating the realities about these issues”
Antonio Caño, Director of El País
The speakers emphasized the urgency to address the issues that are covered in11 books and which entirely corresponds to the Sustainable Development Goals of the United Nations. Antonio Caño described the massive responsibility of media outlets today, when it comes to addressing problems such as climate change, food waste, industrial pollution, education, and others.


“Our society is still not quite aware and we need to amplify these problems. The newspapers are not fulfilling their job of communicating the realities about these issues” he said. He added, “the social awareness over the struggle that our planet is facing, has been growing in recent years: millions of young people across the world are now much more interested in poverty, education and about the impact of climate change on our lives”.
Caño defined the launch of this series of 11 books as “an example of how the media – together with experts on these issues – can fulfill the responsibility that aims not only to guarantee the development of our planet but also to teach us how to respect our planet”.
The main message that emerged from the debate that took place at is that the digital and technological evolution and revolution are posing an incredibly high level of challenges. The intrusion of digital tools in all fields of the economy as well as in politics, has imposed a drastic change in business models that inevitably forced the media to modify the way it plans its activities.
These changes resulted in a lower level of quality of the contents produced by the media and increased an “elitarian communication”, as defined by Antonio Caño. “The traditional media has posed itself quite distant from society: it has started to talk to society from a sort of ‘podium’, and that is happening all around the world” said the Director of El País.
The discussion emphasized how the media today is still not able to properly address these urgent issues – such as climate change. The problem, according to speakers, is that these are topics which are not considered “profitable” by the industrial media. Therefore, the contents tend to address superficial issues or possibly huge catastrophes such as earthquakes and conflicts, not keeping in mind that climate change and global hunger are both human catastrophes as well.
Despite these grim reflections, there was also an optimistic perspective about these challenges. There is also a positive outcome of this crisis in reporting. The technological and digital developments have forced the media itself to do “new things”. It has forced the media to get closer to the people, asking them what they want to hear, read and watch, and that has become a new way of interaction between society and communicators, reducing the gap in “elitarian communication”.