The plight of seniors abandoned in Spanish hospitals

Medical officials say some families fail to pick up elderly relatives on discharge, alleging too much work

The General Hospital in La Palma. GOOGLE
Some say their house is too small. Others complain they have too much work and too little time. And then there are those who don’t even bother coming up with an excuse – they simply don’t answer the calls asking them to pick up their elderly relative, according to staff at the General Hospital in La Palma, in the Canary Islands.
The General Hospital in La Palma, is regularly used as a dumping ground for bothersome next of kin
This hospital is regularly used as a dumping ground for bothersome next of kin. There are currently four abandoned senior citizens at the hospital, though between 10 and 20 is the norm.
Initially, the family brings their aged parent or relation to the emergency services due to a severe health problem, ranging from a stroke to cardiac failure. The patient is admitted and the condition treated, but soon the staff begin to realize that family visits are few and far between, if they come at all. When no one shows up to collect the patient after discharge, these suspicions are confirmed.
“Some people can’t take responsibility for them because they themselves are also dependent on someone else, but other cases are shocking,” says the center director, José Izquierdo, who has watched his hospital make headlines on a number of occasions due to this scenario. “It’s not a problem peculiar to here,” he points out. “It’s happening in all the hospitals in the Canary Islands and across Spain because of our increasingly aged population.”
According to Izquierdo, reporting the worst of these cases to the authorities has met with little success. “This is because the criminal offense of abandonment is not clearly regulated, and also because technically the person is not abandoned since they are being treated in a hospital,” he says.
The search then begins for a spot in a nursing home. But with an increasingly elderly population on the island and only around 300 places available, it can take up to a year to find one.

Meanwhile, in several cases, the families who abandoned the relative are spending the latter’s pension and taking possession of his or her belongings, while the taxpayer foots a bill of around €3,000 a month for their care at a state-run home.
Izquierdo is asking for better laws that will enforce the return of the senior’s property in the event of abandonment.
This situation affects the general public in other ways, such as delays in scheduled surgeries due to a lack of beds, and consequently longer waiting lists. “We are constantly juggling priorities,” says Izquierdo.
One 87-year-old man has been living in the hospital since May 2017. He is an independent sort who simply needs someone to remind him to take his medication at the right time and help him to prepare meals. He doesn’t know why his children don’t come for him. “He says he doesn’t understand what’s happening,” says a staff member. “He has worked all his life and has his own house. He cries a lot. He says all he is asking for is to be taken away from the hospital, because it is ‘an ugly place’ where he sees a lot of people “who go away, who die.”
English version by Heather Galloway. 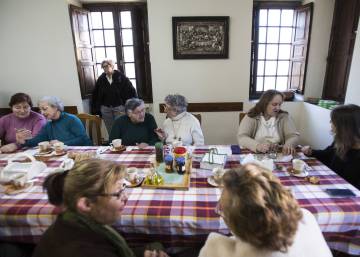 The Galician outreach scheme trying to combat the scourge of loneliness
Parents who have a home birth in Spain without medical assistance could end up in prison
The lonely people buried in graves of garbage
Feeling lonely? You’re not alone
Publicado por salud equitativa en 7:27