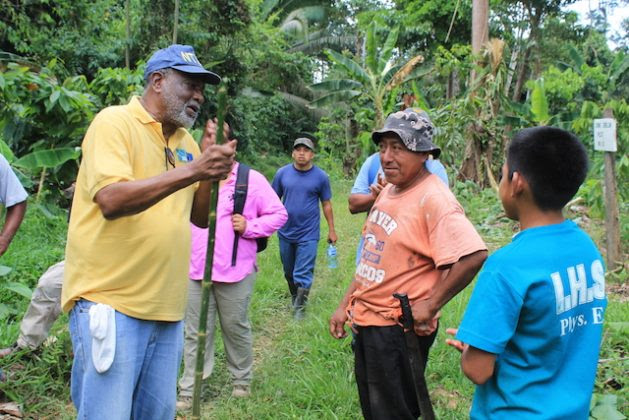 Deputy Director at the Caribbean Community Climate Change Centre Dr. Ultic Trotz (left) in conversation with farmers at a unique agroforestry project in Belize, one of many implemented by the Centre to boost the region's resilience to the effects of climate change. Credit: Zadie Neufville
KINGSTON, Jamaica, Apr 12 2018 (IPS) - The Caribbean Community Climate Change Centre (CCCCC) also known as the 5Cs, is looking for ways to boost the region’s access to the Green Climate Fund (GCF).
The Centre is on the hunt for proposals from the private and public sector organisations around the region that want to work with the Centre to develop their ideas into successful projects that are in line with their country’s national priorities to build resilience to climate change.
The 5Cs, the agency with responsibility for coordinating climate action in the Caribbean, has doubled its efforts in wake of the 2017 Hurricane Season which saw the devastation of several islands and which exacerbates the need for climate proofing critical infrastructure a building resilience.
“We welcome proposals from all areas and industries,” said, Dr. Kenrick Leslie executive director of the Centre, noting that as an accredited entity: “We are able to assist organisations to access Green Climate Fund (GCF) grants for climate adaptation and mitigation projects of up to 50 million dollars per project”.
The GCF has approved a couple hundred million in preparation funding for several countries across the region, but the 5Cs boss is particularly proud of the achievements of his tiny project development team.

On March 13, the Bahamas became the second of the four countries for which the Centre is the Delivery Partner, to launch their GCF readiness programme. In 2017, three countries – the Bahamas, Belize, and Guyana, and more recently St. Lucia – were approved for grants of 300,000 to build in-country capacities to successfully apply for and complete GCF-funded projects that align with their national priorities, while simultaneously advancing their ambitions towards becoming Direct Access Entities (DAEs).
Each ‘readiness’ project is expected to run for between 18-months and 2 years and include developing operational procedures for Governments and the private sector to engage effectively with the GCF; providing training about its processes and procedures, how to access grants, loans, equities and guarantees from the GCF; and the development of a pipeline of potential project concepts for submission to the Fund. These activities are not one-off measures, but will form part of an ongoing process to strengthen the country’s engagement with the Fund.
Guyana’s ‘readiness’ project began in October 2016 and is expected to end in April this year; while the Bahamian Ministry of Environment and Housing and the Centre’s recent hosting of a project inception workshop, marked the start of that programme. The Belize project is expected to begin next month and St Lucia’s will kick-off in May, and run for two years. The readiness projects are being funded by the GCF at a cost of approximately 300,000 dollars each.
Aside from these readiness grants, the Centre secured 694,000 dollars in project preparation facility (PPF) grants for a public-private partnership between the Government of Belize and the Belize Electricity Company.
The project is intended to enable Belize to utilise the indigenous plant locally known as wild cane (scientific name Arundo donax) as a sustainable alternative source of energy for electricity generation. The grant will provide the resources needed to conduct the necessary studies to ascertain viability of the plant, with the intention of facilitating large-scale commercial cultivation for energy generation purposes.
In addition, the Centre partnered with the Barbados Water Authority (BWA) to develop the proposal for the Water Sector Resilience Nexus for Sustainability Project (WSRN S-Barbados) for which the GCF announced 45.2 million dollars in funding – some of which is in counterpart funding – at the 19th meeting of the Board in Korea in March this year.
BWA’s Elon Cadogan noted that the project would directly impact 190,000 people on an island which has been described as “one of the most water stressed” in the Caribbean. The frequency of lock-offs has been costly for the country.
“Schools have had to close due to lack of water and the potential unsanitary conditions are likely to increase health treatment costs. In addition, there have been some cancellations of tourist stays and bookings,” Dr Cadogan, who is the project management officer at the BWA said.
Because of its unique operating structure, the Centre is able to call on its many partners to speedily provide the required skills to complete the assessments required to bring a project to the submission stage for further development or full project funding. In the case of the Arundo donax project, the Centre provided several small grants and with the help of the Clinton Foundation, completed a range of studies to determine the suitability of the grass as an alternative fuel.
For the Barbados project, the 5Cs worked with the University of the West Indies (UWI) and South Florida University (SFU) and the BWA to complete the submissions on time.  With the Centre’s own GCF accreditation completed within six months, the 5Cs is turning its attention to assisting countries with their own.
Head of the Programme Development and Management Unit (PDMU) and Assistant Executive Director at the Centre Dr. Mark Bynoe said that even as the Centre continues its work in project development and as a readiness delivery partner, the focus has now shifted.
“We are now turning our attention to aiding with their GCF accreditation granting process and the completion of their National Adaptation Plans (NAPS). Each country has an allocation of 3-million-dollar grant under the GCF window for their NAP preparation,” he said.
The GCF is the centrepiece of the United Nations Framework Convention on Climate Change (UNFCCC) efforts to raise finance to address climate change related impacts. It was created to support the efforts of developing countries to respond to the challenges posed, and opportunities presented, by climate change through a network of National Designated Authorities (NDAs) and Accredited Entities (AEs).
As a readiness delivery partner, the Centre will provide the necessary oversight, fiduciary and project management, as well as monitoring and evaluation of these ‘readiness’ projects, skills that are critical to ensuring that those projects are speedily developed and submitted for verification and approval.
Every success means the Centre’s is fulfilling its role to deliver transformational change to a region under threat by climate change.