France and Germany, which account for around 50 percent of euro zone output, are essential to the reform drive. But while they often put on a strong show of political unity and shared intent, the devil is frequently in the detail. 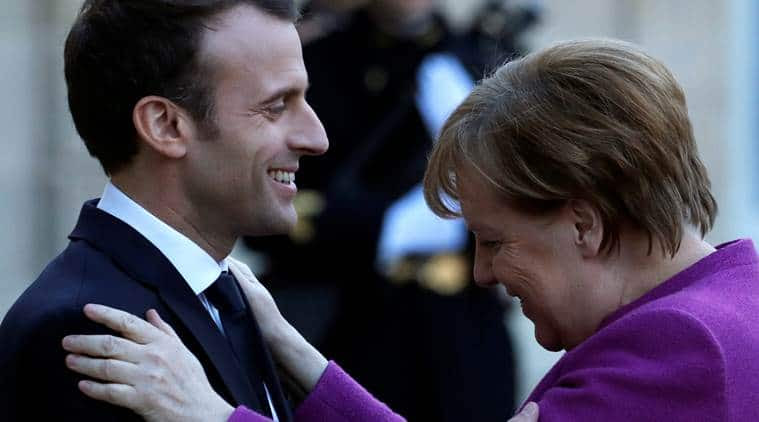 FILE PHOTO: French President Emmanuel Macron welcomes German Chancellor Angela Merkel as she arrives for a meeting at the Elysee Palace in Paris, France, March 16, 2018. REUTERS/Christian Hartmann -/File Photo
The leaders of Germany and France meet on Thursday to try to work out a common position on reforming the euro zone, a sensitive issue that is testing the new government in Berlin just a month after it took office.
Chancellor Angela Merkel, who hosts President Emmanuel Macron for the working meeting, is under pressure from her conservative bloc in parliament not to agree to any reforms that result in German taxpayers funding profligate euro zone peers.
At a meeting with conservative lawmakers on Tuesday, she trod a careful line between Macron’s drive for bold reform and their push to retain scrutiny over any European Monetary Fund developed out of the existing euro zone bailout fund.
Officials in Berlin and Paris both express confidence that they will find a common stance before a European Union summit on June 28-29.
“I hear here and there talk of difficulties between the German and French governments on transforming the euro zone,” French Finance Minister Bruno Le Maire told lawmakers in the lower house of parliament on Wednesday.
“Let me reassure you that the silent, secret, demanding work under way will allow us to reach a true Franco-German roadmap by the time of the next European summit in June,” he said, adding he expected a “sensible and ambitious compromise”.
In Berlin, a government spokeswoman said Germany and France “have the firm desire to find a joint way forward”, echoing Merkel’s own cooperative tone at a news conference on Tuesday.
France and Germany, which account for around 50 percent of euro zone output, are essential to the reform drive. But while they often put on a strong show of political unity and shared intent, the devil is frequently in the detail.
On Tuesday, Merkel said creating a euro zone banking union was a priority for her, but she also broadened out the reform question to include a European asylum system, as well as foreign, defence and research policy.
Framing reform as such a broad issue risks diluting Macron’s drive to beef up the euro zone with extra funding firepower.
Merkel also wants to make economic competitiveness a priority for the euro zone, rather than simply amassing funds for countries in trouble, and has suggested a “Jumbo Council” of European finance and economy ministers, government sources say.
But in an indication of the divisions within her government on euro zone reform, the Handelsblatt business daily reported that Merkel’s junior coalition partner, the left-leaning Social Democrats (SPD), reject the idea.
The SPD sympathises with Macron on the euro zone and wants him to be rewarded for his efforts to reform the French economy, well aware that a big chunk of French voters remains susceptible to far-right and far-left populists sceptical about the EU.
For all the latest World News, download Indian Express App
Publicado por salud equitativa en 7:28