Ageing population in Spain: “A” is for active aging: Spanish city brings young and old together at pioneering center | In English | EL PAÍS

Ageing population in Spain: “A” is for active aging: Spanish city brings young and old together at pioneering center | In English | EL PAÍS

“A” is for active aging: Spanish city brings young and old together at pioneering center 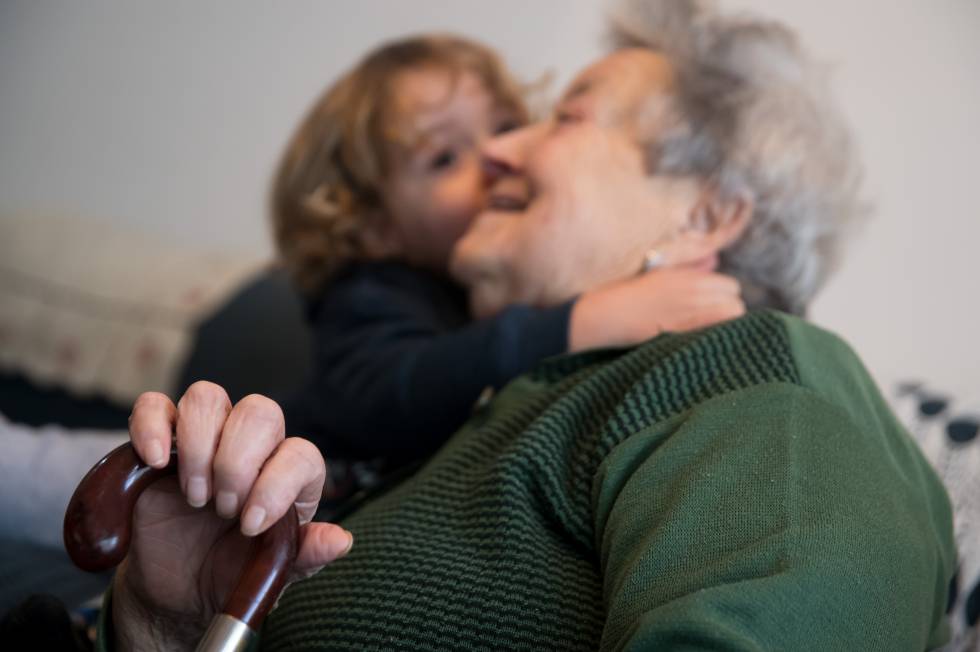 A boy hugs his great-grandmother in the Galician municipality of Ames. ÓSCAR CORRAL

Spaniards are living longer than ever. By the middle of this century, Spain will have the biggest share of elderly people after Japan, according to figures from the Organisation for Economic Co-operation and Development (OECD). Faced with an ageing population, authorities are starting to address a social issue that is already a reality: loneliness among senior citizens.
Ourense, a Spanish province with more pensioners than Social Security contributors, is spearheading an effort that mirrors projects in the US and Japan, where seniors and young children are brought together at inter-generational daycare centers.

PERFECTO RODRÍGUEZ, GALICIAN EQUALITY CONSORTIUM
The €7 million project is being funded by the Amancio Ortega Foundation, run by the Galician-born owner of Inditex, the parent company of fashion retail giant Zara. In 2012, the foundation gave the regional government €35 million to create new daycare centers for small children and jobs for early childhood educators.Two of these centers include areas for older adult care, but only the one in Ourense will run the pioneering inter-generational program.
In the outskirts of Ourense city, in the neighborhood of A Farixa, a unique building has been erected. The low, horizontal structure covers over 3,000 square meters and has plenty of glass to let in the sunshine. Very soon, this center will welcome 80 senior citizens and 82 preschoolers, who will have two separate areas but a large common room.
City authorities, who ceded the land for the center, believe that it will become a reference point for social policies.
“It’s kind of a return to the traditional model in which grandparents and even great-grandparents once lived together with their descendants, leading to mutually enriching relationships,” says Noelia Pérez, of the mayor’s office. Pérez said that Mayor Jesús Vázquez is “excited” about the project.
Elderly residents, though staying in a separate area, will be able to see the children at all times and will have a common space to do activities and play games.
“There is no doubt that the elderly will get the most enjoyment out of it, although children will also benefit from the individualized attention,” said Perfecto Rodríguez, manager of the Galician Consortium for Equality and Wellbeing.
Mariano Sánchez, an expert on this educational model, says that similar projects exist in Murcia and Granada, but what makes the Ourense center unique is “the architecture, the public-private partnership, and the firm decision to organize the center’s daily activities with an inter-generational perspective.”

NOELIA PÉREZ, MAYOR'S OFFICE
Sánchez, who teaches sociology at Granada University and has led research on inter-generational models in Spain and abroad, said that if this project gets the right professionals, it will become “a national reference point.”
The benefits for the elderly include “a sense that they are leaving a legacy behind, making a contribution to the future” by helping with the education of younger generations. “And they improve their social relations, which is vital to longevity, as well as improving their physical condition as a result of the activity they are forced to do.”
As for the children, Sánchez said they acquire “a much more positive outlook on old age.”
English version by Susana Urra.

The Galician outreach scheme trying to combat the scourge of loneliness


Is it time for Spain to address its plummeting birth rate?