A Child of War Dedicates Herself to Peace | Inter Press Service

A Child of War Dedicates Herself to Peace | Inter Press Service

A Child of War Dedicates Herself to Peace 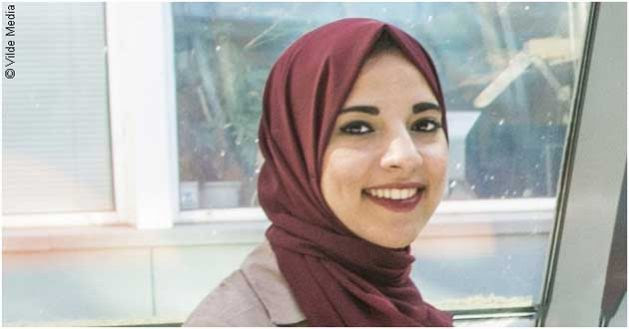 Dalia Al-Najjar, Goodwill Ambassador for Children of Peace. Credit: Vilde Media
PARIS, Apr 17 2018 (IPS) - “I was so angry, I felt like I wanted to blow up the whole world, but I didn’t. I decided I wouldn’t be pushed to become evil. I would choose peace.”
Dalia Al-Najjar has crammed a great deal into her short life. At 22, the Palestinian refugee has already lived through three wars and has spent every spare moment between siege and ceasefire studying, volunteering, working, blogging, on the daily struggle to live in Gaza – and planning how to change the future.
A good deal of her energy goes into her role as Goodwill Ambassador for Children of Peace, a non-partisan children’s charity dedicated to building trust, friendship and reconciliation between Israeli and Palestinian children, aged 4 to 17, and their communities.
Dalia says she is fuelled by anger and hope, but also that she draws heavily on a family culture that values education. She has consciously used learning as a means to realize her dreams, the greatest of which is to find solutions to violence and hatred.
“My family has always made me aware that education is hugely important,” she said.
Dalia experienced her first siege when she was just 12, followed by two major conflicts.
“I was in ninth grade when the first war started, and everything fell apart. I didn’t understand: why were people killing each other? I thought it would last only a few weeks,” she said.
She continued to study throughout, finally graduating with a Bachelor’s degree in Business Administration from the Islamic University of Gaza, her life reduced to the intermittent bursts of electricity in the city.
“In those days I never went to school without watching the news first, and everything depended on the power schedule. So I woke up when there was electricity, or studied by candlelight, which destroyed my eyes. I would often fight with my brother and sister to get the candle.” 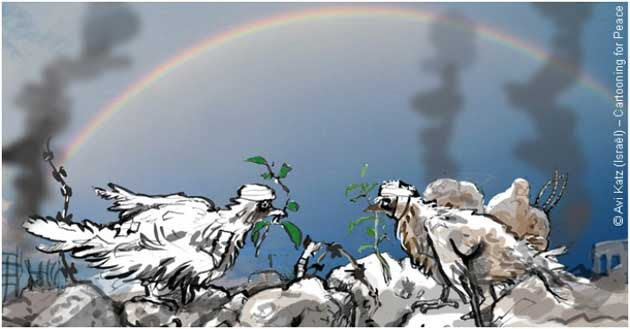 “Wars and Peace”, from the Cartooning for Peace international network of editorial cartoonists, supported by UNESCO.
The 2014 war proved a turning point for Dalia. “After the war, my ideas became much clearer. I didn’t want anybody else to have to live like this. I chose to be optimistic, because if not, I don’t live. Not living wasn’t a choice for me,” she said.
Dalia was invited on a short scholarship to the United States, and began a blog and YouTube show. She is also a member of the World Youth Alliance, a New York-based international coalition, which works with young people worldwide to build a culture that nurtures and supports the dignity of the person – through advocacy, education and culture.
But it is Dalia’s work as a Goodwill Ambassador for Children of Peace that has changed her most profoundly.
“It is easy to stay on your own side and demonize the other. Now I have Israeli friends and we realize we have been given different narratives, and we have to find our way through that together, using critical thinking,” she explained.
“Being on one side of a conflict makes it much easier to dehumanize someone than to accept that there is trauma on both sides.”
Now studying for her Master’s degree in Human Resources in Sakarya, Turkey, Dalia has an exciting new project. She attended the Young Sustainable Impact (YSI) conference in Oslo in 2017, as an ‘earthpreneur’ (someone who uses entrepreneurship to work towards a sustainable planet), where she was tasked with proposing a startup that addressed one of the Sustainable Development Goals.
When she learned that more people die as a result of waterborne diseases than from conflict, she co-founded Xyla Water Filtration Technologies. The company aims to commercialize a filter made from plant tissue that costs less than $10 and can provide clean water for a family of seven for a year.
And she has another goal. “I want to be prime minister,” she said, matter-of-factly.
*Available online since March 2006, the UNESCO Courier serves readers around the world in the six official languages of the Organization (Arabic, Chinese, English, French, Russian and Spanish), and also in Esperanto and Portuguese. A limited number of issues are also produced in print.