WITHOUT ANYTHING ▼ Illegal immigration into Spain: ‘Risky’: how minors play cat-and-mouse in Melilla in bid to get to Spain | In English | EL PAÍS

Illegal immigration into Spain: ‘Risky’: how minors play cat-and-mouse in Melilla in bid to get to Spain | In English | EL PAÍS 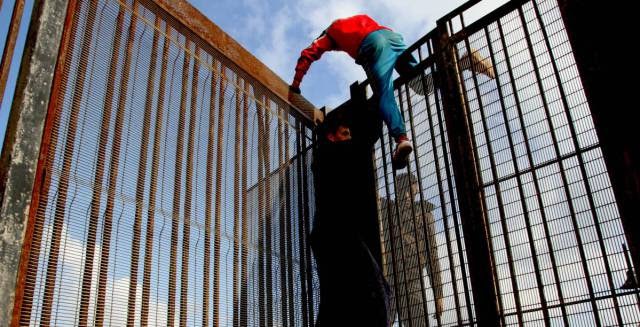 ‘Risky’: how minors play cat-and-mouse in Melilla in bid to get to Spain

Dozens of young people regularly hop over the border fence, only to be apprehended by the Civil Guard and sent back again 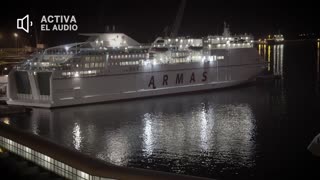 It is two in the morning at the port of Melilla, a Spanish city on the northern coast of Africa. From a high fortress, many teenagers observe a ship that is about to set sail. They are minors of Moroccan nationality, without parents in the city.
They watch attentively, attempting to discern whether their friends – who just a few hours ago jumped the harbor’s fence – have managed to sneak into trucks that are now being carried across the sea. It is risky: a sort of “game” in which they trespass and conceal themselves in the hope of being transported to the Peninsula or elsewhere abroad.
More than 90% of these 600 unaccompanied minors proceed from Morocco. They hear stories - through Facebook or word of mouth - of others who managed to arrive at promised lands by playing the game. Without Spanish or European nationality, it is effectively their only hope of being able to live anywhere in the North.

While awaiting their great escape, between 50 and 100 of them avoid sleeping in the city’s primary juvenile care facility, La Purísima. Many claim to do so because it is overcrowded (there are 172 beds for about 350 minors) and because they “receive bad treatment by some of the staff there.”
María Isabel Martín, youth affairs prosecutor of Melilla, vehemently denies this: “There is no indication that a situation of maltreatment persists at La Purísima.” Daniel Ventura, counselor of social wellbeing, concurs: “They are not going to the facility because they have personal problems. They come from the streets. They don’t want rules. They’ve come to play risky.”
At dawn a group of adolescents sit on the high fortress, studying the movements of the ships. Some, as young as eight years old, smoke joints of marijuana, while others bandage wounds ranging from minor to severe. They blame these on the Civil Guard.
“When they catch me trying to enter the harbor, they take off my shoes and throw them in the sea.”
“They hit us often [with their clubs],” says one of them, a 16-year-old. A dozen others recount similar experiences. Upon nightfall, Civil Guard car arrives at high speed, as the children flee.

Respect and education, if you do not get it from home, we’re going to teach you the hard way
CIVIL GUARD OFFICER AT MELILLA PORT

An agent steps out, chiding them. “Why do you run? You idiots!” One child responds from afar in broken Spanish: “Many club, many club.” The agent retorts, “Many clubs when you deserve them down in the harbor.” He adds, “Respect and education, if you do not get it from home, we’re going to teach you the hard way.”
“We don’t use clubs at the harbor,” explains Guillermo Prada, a spokesperson for the Civil Guard of Melilla, who acknowledges that they sometimes have been used on the rocks of the breakwater, on the way to the harbor, to avoid “greater harm.” The use of force in any case is always proportional, appropriate, and suitable,” he maintains. He also denies that there are dead zones between the harbor’s security cameras, a claim the kids often make to explain the lack of images proving their abuse by the Civil Guard.
Prada explains that the cases the administrators see also “affect them” personally. “They fall from a height of 9 or 10 meters. We find them practically unconscious, sometimes having taken who knows what type of substance.” He considers his job to be an endless cycle: “We remove them from the harbor, we take them to the care facility, and then they go back to the harbor again. Each time, there are more injuries, and to top it all, some of them report aggression by the agents. “Until administrators come to an agreement and find a solution, this problem is not going to go away.” The city of Melilla has announced an investment of €650,000 to install a new fence at the harbor.
There are no official figures, indicating how many are trespassing. It is simply known that children are disappearing. One young man, who prefers not to be named, is 19 years old and has lived in the city for 11 years. Lacking a residence permit, he lives in a small shack on a hill close to the Moroccan border, from which he can see the entire city – including the ships that arrive and depart. He has attempted risky two times, both unsuccessfully.
In his first effort, he managed to land in a truck, where he stayed hidden for four hours on the trip to Motril. When he arrived there, however, he was discovered by guard dogs. After police interrogation, he was sent back to Morocco. (Had he been a minor, he could have returned to Melilla. But he had just turned 18 before attempting to leave.)
After being deported, he returned to his shack in Melilla and began planning his second attempt at risky, in which he was caught before the carrier ship had even departed.
Others have not been as lucky as him, however. Some have been run over by trucks, as occurred twice in May. One died after falling from a cliff, and some end up in the hospital. And yet, this young man, who has failed twice now, still contemplates how he can attempt a third trip.
Among his desired destinations, he does not consider Spain (where he already has an order for deportation). He thinks about Sweden, Belgium and occasionally even fantasizes of Canada.
“I want to leave already. I don’t want to be 40 or 50 years old and still be living in this shack,” he says.
English version by Henry Hahn.