Violence in Mexico: Art against bullets: one Mexican teacher’s victory over violence | In English | EL PAÍS

Violence in Mexico: Art against bullets: one Mexican teacher’s victory over violence | In English | EL PAÍS

Art against bullets: one Mexican teacher’s victory over violence

ZORAYDA GALLEGOS
Mazatlán 27 DIC 2016 - 11:27 ART
In the spring of 2010, La Noria, a picturesque mountain village some 30 kilometers inland from  Mazatlán, a resort in Sinaloa, on Mexico’s northern Pacific coast, suddenly found itself caught up in the military campaign the then-president, Felipe Calderón, had launched against drug cartels four years earlier. 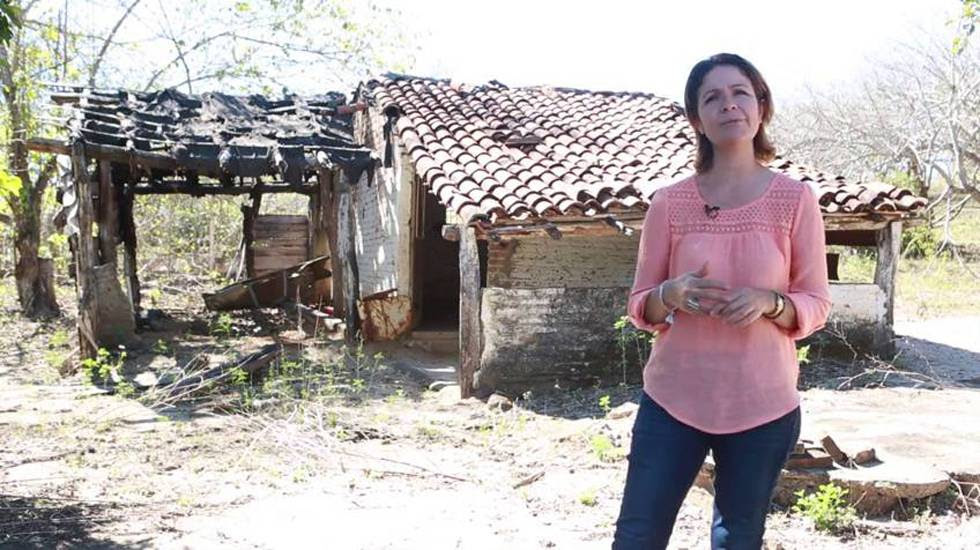 
Armed gangs terrorized the area in response to military incursions, forcing thousands of people throughout the area to flee. La Noria, once home to some 1,250 people, was emptying. The few families who had remained stayed indoors and wouldn’t allow their children out to play, or even to attend school.
Marisol Lizárraga, a local schoolteacher, decided the time had come to take a stand. “There were dismembered bodies dumped on the highway, people were being kidnapped, they would turn up and kick in people’s doors,” she says. “That’s when I told myself: if these men see that the village is empty, then they’ll think they can take it, so I thought: we have to be seen, we have to go outside, and that’s when I started working with the children,” she explains.

If these men see that the village is empty, then they’ll think they can take it
MARISOL LAZÁRRAGA

After arranging painting classes in the village square, she then used her savings to rent a large house, setting up an impromptu school in it and providing reading classes to local children. Six years later, the building, which she owes a year’s rent on, now houses a museum filled with artifacts made by indigenous peoples from the area collected by her pupils. The regional administration has not responded to her request for state aid.
When Lazárraga set up her school, the death toll in the state had reached 2,210, or six a day. In the six years since, a further 13,000 people have died in the war continued by President Enrique Peña Nieto against the drug cartels. 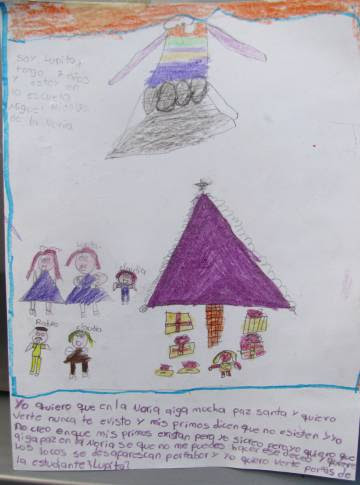 Lazárraga, who combines her activities in La Noria with a job teaching special-needs children in a school in Mazatlán, some 45 minutes away by bus, says she soon became aware of the impact of the violence on her charges, noticing that their drawings frequently included weapons, as well as crosses marking graves. Two brothers sent a letter to Santa Claus asking if their father, who had been kidnapped and disappeared, could spend Christmas Eve with them. Other children asked for peace: “I want the crazy men to disappear please,” wrote Lupita, aged eight.
Furthermore, she realized that the secret to keeping the children calm was to get them to express their fears through painting and drawing. She says that over time, much of the anger in their first pictures has gradually disappeared. “Bringing them into contact with art makes the children more aware and they are able to see life differently,” she says, proud that she has managed to keep the children away from crime. “I think that if instead of being interested in guns they are interested in a profession, then we have achieved a lot,” she says. 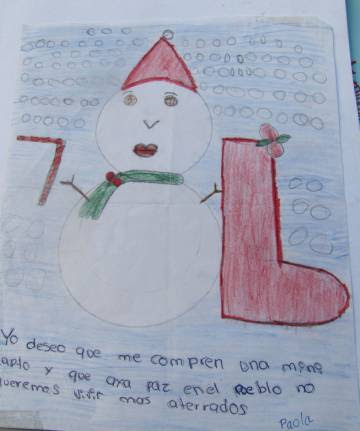 Her work has earned her the gratitude of many local parents: Juan Antonio Salas has lived in La Noria all his life. He says that when the violence erupted in 2010, he thought about moving to Mazatlán with his family. But after talking it through with his wife, he decided to stay. He says he is grateful to Marisol Lazárraga for making life more bearable and for helping his children live through the violence. “All we asked her was that her workshops were during the day, before night fell,” he says.
His 13-year-old son Juan was one of the first to study with Lazárraga. Salas says that as a result of his time with her, his son is more responsible and works harder. “She is a great teacher and her work with the children of La Noria is admirable,” he concludes.
English version by Nick Lyne.
Publicado por salud equitativa en 7:17