Madrid 20 ENE 2017 - 10:41 ART
“It’s still difficult to talk about. It hurts. It was 10 years ago, but it’s like it was yesterday. When this time of year comes around, you’re with the family, but it’s still there.” Carmen Estacio lives with the trauma of the loss of her brother Diego Armando, who was killed along with fellow Ecuadoran Alonso Palate when Basque separatist group ETA set off a bomb in the parking lot of the T-4 terminal at Barajas Airport in Madrid on December 30, 2006 bringing to an end a nine-month truce. 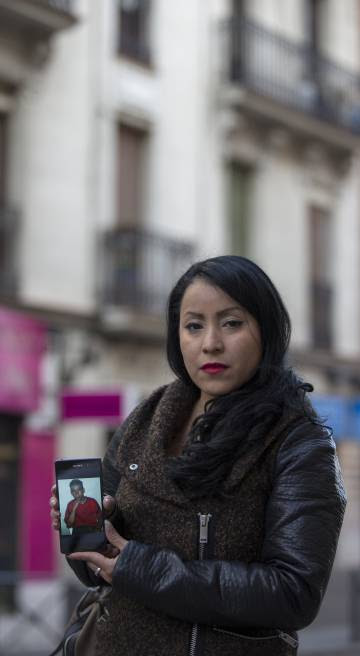 Carmen Estacio with a photograph of her brother, Diego Armando. VICTOR SAINZ


The bodies of the two victims were flown back to Ecuador, while their families were given Spanish nationality. Of the 50 or so relatives of the men, who depended in large part on their remittances, many were given financial assistance to come to Spain and were issued with residency permits. They were also provided with housing, psychological assistance, training and jobs. Then, in 2008, the financial crisis kicked in. Over the course of the following years, many of them returned to Ecuador or looked for new opportunities in Italy.
“They were working and seeing what life was like here, a bit tough. And they left, because they couldn’t adapt,” says Carmen, who is trying to organize a Mass in Madrid for relatives of the two men. “The way of life here is very frenetic,” she says. “My father says that everything is too hard, very difficult. It’s more expensive here, and things were just a bit too tough for them.”

Diego Armando was aged 19. The day of the attack at Barajas he had gotten up early to go to the airport and was waiting in his car when the bomb went off.
After his body arrived in Ecuador, Diego Armando was buried in the cemetery of Machala, a small coastal town in the south of the country, close to the Peruvian border. Ten years on, the family says his father has bought a plot next to his son’s grave, and that the pain has not gone away. The family also had to take the regional government of Madrid to court to get it to register the apartment it handed over to the family in compensation. But they say they are grateful to the authorities in Spain, who “fulfilled their obligations.”
The bodies of the two men were flown to Ecuador accompanied by family members and a handful of politicians. Consuelo Rumí, who was secretary of state for immigration at the time, describes the trip as “a journey through darkness.”


Many of the families of the victims failed to adapt to live in Spain
“It was distressing in every sense: because of what the families were going through; the plane was a military aircraft and very uncomfortable. From the airport we went by bus to where the deceased had come from, long hours on bad roads. A few days after, there was a meeting with Prime Minister Zapatero in Madrid, where we met with the families. They were all helped with programs to integrate into Spanish society.”

Palate, the other victim, had gone to Barajas airport with a friend who was meeting his wife. He sent €300 a month home to his family in Ecuador. This was the main source of income for his mother and three brothers, who were helped by the Spanish government to come to Spain. But they found life in Madrid a culture shock. His mother recovered her eyesight after undergoing an operation. Her children, Luis Geovanni, María Elvira and Luis Jaime, moved with her to Valencia. The youngest found work picking oranges, while Luis Jaime, who was virtually blind in one eye, joined a training scheme run by the ONCE organization for the blind. He found work, but then lost it during the crisis. Today, he is the only member of his family who still lives in Spain, scratching a living installing fiber optic cables in Almería.
“I’m getting by, like anybody else,” he says. “The truth is that we’re not getting any more help,” he says about the Spanish authorities. “I can’t forget what happened and I’d rather not talk about ETA. I didn’t know anything about the history and that’s for the best. Like anybody else, I want a good job and the chance to get on with my life,” he says.
Two plaques have been placed in the new parking lot at the airport. The families fondly remember former Prime Minister José Luis Rodríguez Zapatero, who continued to send cards to them for many years afterwards; also King Felipe VI, then still a prince, who attended a Mass in honor of the victims in the Ecuadoran capital of Quito; as well as the authorities in Madrid and Valencia.


Diego Armando was 19 when he was killed in the ETA car bombing
But overall, the last decade has been tough. The more than €200,000 each family received in compensation attracted Spanish and Ecuadoran banks. They had to decide whether to invest in their own country or here in Spain. Many failed to adapt. The apartments they moved into became gilded cages, and loneliness was also a problem.
“Many people tried to take advantage of the situation,” says Vladimir Paspuel, president of emigrant association Rumiñahui, which helped the Palate family. “They were quite poor. The other family didn’t have so many problems. Their sociological situation was a little more stable,” he explains. “The brother kept the family together. Suddenly, from one day to the next they had no support. That destabilized them. They went to live in Valencia. There they were sometimes absolutely alone,” he adds. “That made an impact and they decided to return [to Ecuador]. They didn’t know anything about ETA. Later on they learned a little more. And that was that. They had enough problems as it was. It was about survival: who is going to send me money to buy food? Their world fell apart.”
English version by Nick Lyne.
Publicado por salud equitativa en 4:53