Wet foot, dry foot policy: Cuban migrants: “What Mexico is doing to us is inhuman” | In English | EL PAÍS

Wet foot, dry foot policy: Cuban migrants: “What Mexico is doing to us is inhuman” | In English | EL PAÍS

Cuban migrants: “What Mexico is doing to us is inhuman”

When US ended ‘wet foot, dry foot’ policy, hundreds of islanders got trapped near end of their journey

Tapachula 17 ENE 2017 - 12:40 ART
Elaine Miranda, 25, could no longer go on. Her journey to the United States had begun in Trinidad and Tobago when she was eight weeks pregnant. She and her husband Marcos Delgado, 25, slowly advanced north through the Amazon region and Guyana. The most complicated part of the trip, through the jungle of Darién in Panama, came when she was about to give birth. 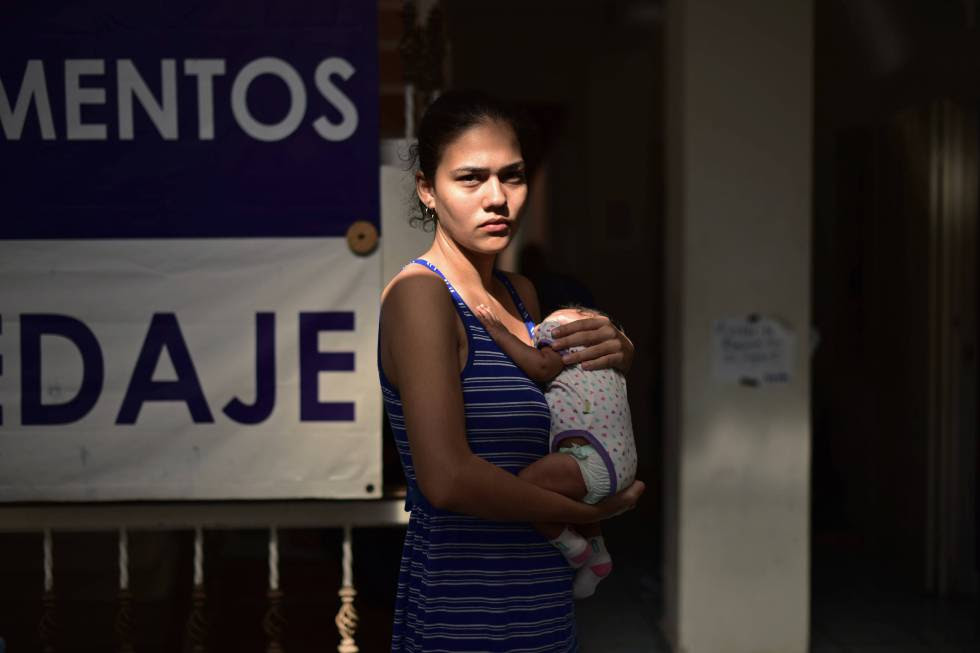 “I somehow found the strength to go on, in the hopes of reaching the United States,” she recalls proudly.
Eight men carried her in their arms for two days, when the contractions became too much to bear. Some time later, a helicopter took her to a hospital in the capital.
Liz María was born on December 12 and registered as a Panamanian citizen. After a 20-day rest, the family took up their journey once again.
They and around 50 other Cubans are staying at the Plaza Emanuel hotel in downtown Tapachula, a southern Mexican town located just a few kilometers from the border with Guatemala.

The only thing I am asking Mexico is to get them out of here; after that, we’ll see what happens with Donald Trump

ALEXANDER PEREIRA, MIGRANT
They are there as a result of the United States’ decision to end its “wet foot, dry foot” policy allowing Cubans who made it into US soil to stay and apply for residency. The decades-long approach was nixed on January 12.
Downtown Tapachula feels like a miniature Havana. It is a small parallel world filled with precarious accommodation going for one dollar a night, mafias keen to fleece the desperate migrants, and telephones that keep ringing in the hopes that Washington will repeal its decision and allow them to pursue their American dream.
“They started coming a year ago. Before that, it was unusual for them to come this way. I’d never seen as many Cubans as I see now,” says María Teresa Barrios, 52, who runs a beauty parlor near the hotel. “Unfortunately, they are being taken advantage of; a lot of people are benefiting from their despair and fear.” 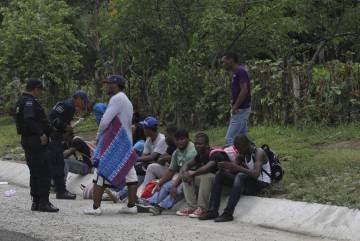 Inside the hotel, there is an old Sony TV set that is always on, while people talk on their cellphones, wash their clothes and try to while away the time as they lie on old mattresses. Lester Ávila turns up the volume on the TV.
“Look, it’s the people we were with!” exclaims his cousin Yudalmi Quezada. The images are showing migrants trapped in Costa Rica who were held back by strict border controls in Nicaragua.
“This is the same news as four days ago. When are they going to say something new and give us a way out?” says one of the viewers. The others keep silent, looking depressed and strained.

“Barack Obama has created a humanitarian crisis. Couldn’t he consult with the rest of the countries and gradually lift the policy?” wonders Yusnier Peláez, Yudalmi’s husband. Nobody replies.
“Life has collapsed, and we are stuck here; that’s what drives us mad, our families are worried,” says Sandy Prieto, who looks particularly angry.
Prieto holds out his phone and shows a message exchange with his uncle Gerardo, who is living in the US.
“I need more money for the lawyer, otherwise the safeconduct procedure could take until February, and I need to leave urgently,” wrote Sandy. “I already sent you $600, you decide what to do with it, but I don’t recommend the lawyer,” replies Gerardo.
Prieto has heard the rumor that by paying legal advisors, a safeconduct through to the US border can be obtained faster and without turning oneself over to the authorities. But he is full of questions.
“Nobody is explaining anything to us. The Mexican government should explain our situation and let us continue on our way. We are not interested in remaining here,” he complains. “They are very corrupt, they have an interest in seeing us screwed, so they can take advantage of us,” adds Ávila.


ZORAYDA GALLEGOS
In 2015 alone, on the 1,000-kilometer-long border with Guatemala, Mexican authorities detained 190,366 people who were trying to reach the United States. The Mexican government’s Programa Frontera Sur (Southern Border Program) is largely responsible for this spike. The initiative was designed to stem the flow of people passing through on their way to the US.
The safeconduct has become the new object of desire, at least to ensure a smooth journey for the 20 days that it takes to cover the more than 2,000 kilometers separating Tapachula from the northern border.
Alexander Pereira already has one. He turned himself in on December 29 and was held for nearly two weeks at a migrant center, until the coveted document arrived on January 9.
“They treat us like animals, there are no mattresses, they don’t give us good food. There’s no two ways about it, it’s a prison,” says Pereira, 50. His 23-year-old nephew and the latter’s 21-year-old wife – who is eight months pregnant – are still inside, along with her three-year-old daughter.
“Out of a group of 110 Cubans who went in on December 29, only nine have been granted permits, the others are still inside,” says Pereira. “We cannot expect any help, because those same guards have tried to extort money from our families, telling them to send cash because we have been arrested. What they’re doing to us is inhuman.”
The safeconduct will protect Pereira until January 29. But time is running out. If his relatives do not get a safeconduct by Tuesday, the next visiting day at the center, he will continue the journey by himself. But he has not told them about his decision yet.
“I will do it with great pain in my heart,” he confesses. “The only thing I am asking Mexico is to get them out of here; after that, we’ll see what happens with Donald Trump”, he says.
Then he puts out his cigarette, climbs into a van and returns to downtown Tapachula, the unlikely new home for hundreds of Cubans.
English version by Susana Urra.
Publicado por salud equitativa en 4:54

Did you know that you can shorten your urls with LinkShrink and earn cash from every visit to your short urls.