Claiming vulgar terms for women’s bodies does not advance their rights. 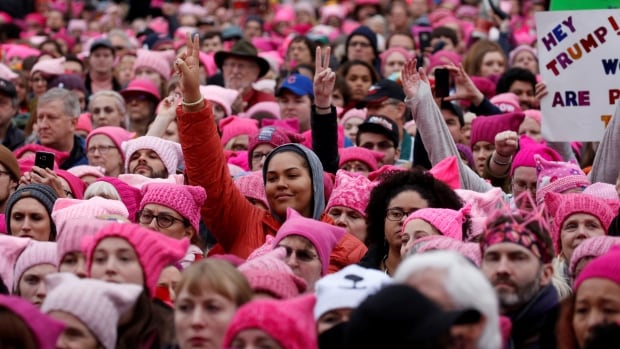 Photo: Shannon Stapleton/Reuters, from CBA
Excuse me: I thought women – everyone, in fact -- were disgusted with the sexism and crudity of Donald Trump. I thought they were absolutely scandalised and infuriated that he has boasted about taking sexual liberties with “beautiful women”, “moving on them” and forcing intimate contact on them.
Respectable media like The Washington Post, which unearthed a revealing 2005 tape, and The New York Times had to hold their noses while they described in detail its content. The Times found it “extraordinarily vulgar”. The Post called it “extremely lewd”. And it was. Others said it was criminal.
So what’s with the pink “pussyhats” in the Women’s March on Washington on Saturday? Why did organisers take one of Mr Trump’s vulgar and lewd, not to mention disrespectful terms, used in the context of possibly criminal behaviour, and turn it into an emblem of their event? Is the word no longer vulgar, lewd or offensive? Or is it only such when a man you don’t like uses it?
The gals who ran the Pussyhat Project acknowledge that it is a “derogatory word for female genitalia” but they “chose this loaded word for our project because we wanted to reclaim the term as a means of empowerment.” They are proud of their lady parts and see nothing wrong with drawing attention to them as a symbol “our femaleness and femininity” in their “stand for women’s rights”.
Well, all sorts of ugly words have been “reclaimed” by different bits of the feminist movement in defence of women’s rights. An infamous play even tried to rehabilitate “rape” so long as it happened in a lesbian context.
But the strategy is fundamentally flawed. If a word, by common consent, is vulgar and lewd – even today, when such words are peppered through the mainstream press – in one context, then it is vulgar and lewd in all contexts. Whether you care about vulgarity is the issue, and apparently the women’s march people do not.
But they cannot at the same time lay claim, as the pink hat project does, to a “femininity” whose strengths are “caring, compassion and love”. The two types of language simply cannot be reconciled with each other. For women to claim it as their own represents a defeat, not a triumph.
It is an admission that a certain kind of masculine culture now dominates society – a culture that has little respect for distinctive feminine qualities, wants to press women into the same sexual and social mould as men, and will call abortion a “woman’s right“ just to get its own way.
Girls, you got it wrong. You handed the boys’ locker room another victory.
Carolyn Moynihan is Deputy Editor of MercatorNet

Apologies. Our commenting system went on strike yesterday and today. So if you couldn't read the comments or couldn't make comments, be of good cheer. They're back.
If you're interested, I'll tell you why it happened. We tweaked our social media buttons and added one which makes it easy to forward article links via email, not just by Twitter and Facebook. Apparently there was some sort of conflict in the coding -- which has been resolved.
I'll take advantage of this glitch to thank you for being part of MercatorNet. Comments are an important aspect of the website. I often disagree vehemently with some of them, but we're normally happy to let a thousand flowers bloom, to give voice to a diverse range of opinions. We don't want to live in a bubble.
And social media are extremely important. We need you, our readers, to tell your friends about MercatorNet and send them links. That's the way we'll grow.
There's plenty to read in today's issue. Check out the links below.