THE HUNTING OF WITCHES AND THE INJUSTICE OF ECONOMIC POWER ▼ Political corruption in Argentina: Argentina’s Kirchner claims latest indictment is a political witch-hunt | In English | EL PAÍS


Buenos Aires 28 DIC 2016 - 11:53 ART
Former Argentinean President Cristina Fernández de Kirchner has reacted angrily to the decision of a judge on Tuesday to indict her as part of a corruption probe. Using tough language on her social network accounts, the politician insinuated that the legal proceedings against her – based on suspicions of illicit association aimed at diverting public-works contracts to a company with which she had links – is in fact a witch-hunt given that she now forms part of the opposition. 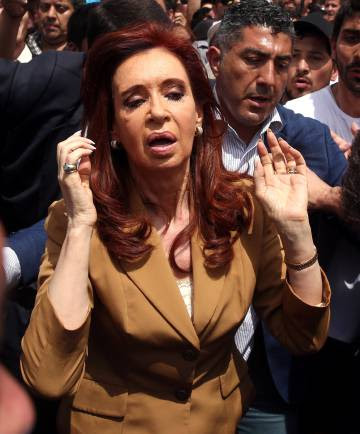 “Illicit association was the criminal definition created by de facto governments [and] used by all dictatorships to prosecute opposition leaders,” the former president wrote via her Twitter account, where she also voiced harsh criticism of Judge Julián Ercolini, who is behind the indictment.
The ruling also involves the freezing of $666 million of the ex-president’s assets, an enormous sum that is not related to her wealth, but rather the amount of funds allegedly involved in the fraud. However, no money will be withdrawn from the bank accounts of Kirchner, who declared a personal fortune of €5 million in 2016.
The indictment implies that the judge has found sufficient cause to begin a court case against Kirchner. This will allow the judge, should he deem it necessary, to stop her from leaving the country and even place her in temporary custody.
Judge Ercolini is investigating an alleged chain of responsibility that begins with the ex-president and runs through the entire official public-works structure. As such, the indictment also includes the former federal planning minister, Julio de Vido; Lázaro Báez, the owner of the company that is under investigation, and who is currently in custody for money laundering; and José López, the former secretary for public works. The latter suspect has been in prison since June 14, when the police found him throwing bags stuffed with dollar bills into a convent on the outskirts of Buenos Aires.
The ruling also involves the freezing of $666 million of the ex-president’s assets
This week’s ruling marks the second indictment against Kirchner since she left power on December 10, 2015. But it is the first linked to a corruption probe. In the first instance, the Argentinean justice system is investigating the ex-president for an operation involving the sale of US dollar futures contracts by the country’s central bank when she was in power.
In that case, prosecutors argued before a judge that a “criminal plan” had been set up from the Casa Rosada presidential palace to favor Austral Construcciones, which, during the years that Fernández de Kirchner and her predecessor, husband Néstor Kirchner, were in power, obtained infrastructure contracts valued at around $3.3 billion.
The indictment implies that the judge has found sufficient cause to begin a court case against Kirchner
An audit carried out by the government of her successor, President Mauricio Macri, determined that there had been over-payments of as much as 50% for these works, which accounted for a total of as much as $1 billion.
This latest indictment has reignited the debate over whether Kirchner will end up seeing the inside of a prison cell, a possibility that has haunted the political world in the South American country since the very first day of the current government. Judges have summonsed her to testify in a number of investigations, occasions that she has managed to convert into improvised political rallies. While her faithful supporters hail her, her detractors are using social networks to call for her to be put behind bars as soon as possible.
English version by Simon Hunter.
Publicado por salud equitativa en 7:25