Celebrity parties in the White House tell American voters that they probably made the right choice. 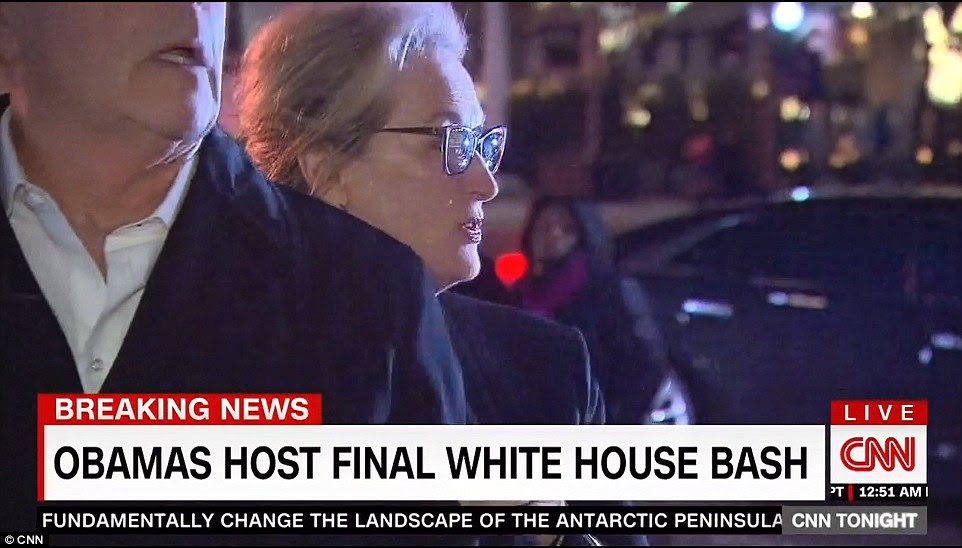 Meryl Streep arrives at the farewell party at the White House
President Obama had a rhetorical technique in his major speeches which never failed to touch me. He would relate how humble, hard-working boys and girls, men and women, were the heart of the American dream. He would single one out and describe his or her idealism, honesty, grit, and simplicity.
It almost brought a tear to the eye to think that the elegant, intelligent POTUS, the Commander-in-Chief of the world’s mightiest fighting force, the head of 320 million people, the most powerful man on the planet, cared so much about ordinary people.
Remember what he said on the evening of his re-election in 2012?

We believe in a generous America; in a compassionate America; in a tolerant America, open to the dreams of an immigrant’s daughter who studies in our schools and pledges to our flag. To the young boy on the South Side of Chicago who sees a life beyond the nearest street corner. To the furniture worker’s child in North Carolina who wants to become a doctor or a scientist, an engineer or entrepreneur, a diplomat or even a President. That’s the future we hope for. That’s the vision we share.

Remember his State of the Union Address in 2015? He spoke about a struggling young couple from Minneapolis:

America, Rebekah and Ben’s story is our story. They represent the millions who have worked hard and scrimped, and sacrificed and retooled. You are the reason that I ran for this office. You are the people I was thinking of six years ago today, in the darkest months of the crisis, when I stood on the steps of this Capitol and promised we would rebuild our economy on a new foundation. And it has been your resilience, your effort that has made it possible for our country to emerge stronger.

So why weren’t Rebekah and Ben and the young boy on the South Side of Chicago and the furniture worker’s child in North Carolina invited to Barack and Michelle’s private farewell celebration at the White House last week?
Not to mention the homeless and hungry a few blocks away from the 1600 Pennsylvania Avenue?
Who took their places on the dance floor in the Palace of Democracy?
A Hollywood A-List, most of them millionaires many times over.
George and Amal Clooney. Lena Dunham. Paul McCartney. Meryl Streep. Robert De Niro. Tom Hanks. Jerry Seinfeld. Magic Johnson. Chris Rock. Sarah Jessica Parker. Etc. Etc. Etc.
Tomorrow the President will give a farewell speech to the nation in Chicago. He will have words aplenty to offer to the crowds in the freezing weather.
Words are cheap. When he threw a party for his best friends, he invited the rich, the famous, and the powerful. Not moms and dads working two or three jobs, not disabled veterans, not hard-working immigrants from Guatemala and India.
Cossetting rich celebrities sends a message to the electorate. Remember Hillary Clinton’s star-studded election night party with Katy Perry, Lady Gaga, Melanie Griffith, Pharrell Williams, and Beyoncé all waiting for her to shatter the glass ceiling?
Maybe this is why the little people whom Obama mentioned in his speeches and whom he forgot to invite to his party elected the guy with the terrible haircut.
Anyhow, it was one hell of a party, according to Variety, the entertainment industry magazine, which said that the Obamas probably picked up the tab for the event. Guests were stumbling out of the White House at 4 o’clock in the morning while inside Barack and Michelle served their guests chicken and waffles.
Waffles. How appropriate.
Michael Cook is editor of MercatorNet.

Happy New Year! We're back! Thanks very much to all who donated during our pre-Christmas fund-raising drive. I hope that your generosity will enable us to make significant improvements in social media and to make the site mobile-responsive.
There's some great reading below. Check out especially a response to detractors of Pope Francis and Priscilla Coleman's stinging critique of a biased pro-abortion study published in a leading medical journal.