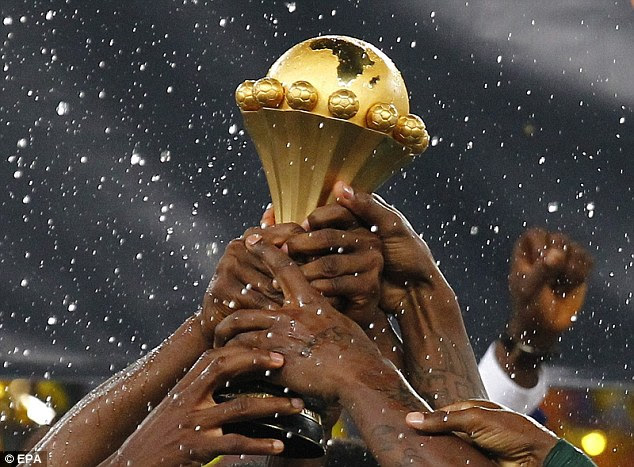 After a tumultuous 2016, it is not surprising that Africa is entering 2017 shrouded in a thick cloud of uncertainty. In some ways, the future has never looked brighter. A young and expanding population, increasing literacy, robust economy, as well as increasing investor interest from the rest of the world, all promise a central role for Africa in the 21st Century. But great challenges remain which threaten to torpedo the African dream.
Luckily, Africa starts 2017 with a game. Starting this Saturday, Africans from Dakar to Mombasa, Cape Town to Cairo, will be glued to television screens and radios, following the Africa Cup of Nations. Most Africans are passionate about football (which Americans call soccer for some incomprehensible reason). Players from across the continent will converge in Gabon, a small, oil-rich country nestled in Africa’s central crook, to try and take the trophy back with them.
For many Africans, the games provide relief from the pressing problems their countries face. The host country itself is just recovering from violent political unrest following a dispute over the re-election of incumbent President Ali Bongo late last year. The violence in Gabon seems to have abated, but there is little news by which to verify this.
Also on the West coast, a political crisis in the tiny state of The Gambia continues. Towards the close of last year, incumbent strongman Yahya Jammeh lost an election and, in an unprecedented moment of humility, conceded. Shortly after, in an even more unprecedented about-turn, he retracted and refused to step down, plunging the country into a deep political crisis. Its neighbours are trying to defuse the situation. Military intervention has not been ruled out.
In the Democratic Republic of the Congo, the last days of 2016 were perhaps the tensest since President Kabila decided to overstay his term and not step down on December 19 as constitutionally required. The country’s Catholic bishops, under Pope Francis’ special urging, have been working around the clock, mediating an agreement between the president and the opposition. So far, there is little progress. Instability has already claimed hundreds of lives.
Burundi is another African country with a crisis which is attracting far too little attention. It is quite possible that genocide is in progress there. President Pierre Nkurunziza is sitting tight through his unconstitutional third term.
South Sudan seems poised to descend into another all-out ethnic civil war pitting government forces against a faction loyal to exiled Vice President Riek Machar. Somalia, the cockpit of an ongoing battle pitting African Union forces allied with the Somali government against the insurgency of Al-Shaabab, also goes to the polls this year after three postponements. A new president, senate, parliament and local authorities will hopefully be elected.
Back in West Africa, in the third quarter of 2016, the economy of Nigeria, Africa’s largest, shrunk by 2.24 percent, lengthening a year-long recession triggered by the recent fall in oil prices. It is likely the recession will continue through the first half of the year. The impact on ordinary Nigerians trying to feed, clothe and educate their children has been debilitating. How Nigeria pulls out and whether it can wean the economy off an overdependence on oil, will be interesting to watch.
In August, Kenya, a country whose reputation as Africa’s most politically stable was shattered by its post-election crisis in 2007/2008 will also return to the polls, the second under its 2010 constitution. Already the mood in the country is changing. Anxiety is building up. It is highly probable that veteran opposition politician Raila Odinga will try a last time for the presidency, after two elections in which he claims voter fraud denied him the top seat.
Incumbent President Uhuru Kenyatta and his Deputy William Ruto, both now cleared of the charges at the International Criminal Court of crimes against humanity (relating to the 2007/2008 crisis) which partly fueled their ascendancy to power in 2013, face the arduous task of convincing a republic wary of the incredible corruption and insecurity that have accompanied their first term in office to trust them with the country for five more years. This happens in the context of heightened tribal tensions which threaten to tear the country apart once again.
There is little doubt that August will also see the reelection of Paul Kagame for another seven-year term as President of Rwanda. To his credit, he has almost single-handedly taken the country from the depths of murderous genocide to stability and miraculous economic growth rates. However, he needs to do more to show his commitment to democracy.
Nevertheless, political progress is being made elsewhere on the continent. On January 7, a smooth transition took place in Ghana when Nana Akufo-Addo was sworn in after defeating incumbent John Mahama in an election late last year (his inauguration speech is currently doing rounds on the internet for plagiarizing from former American Presidents George H.W. Bush and Bill Clinton). Eduardo dos Santos, who has been President of Angola for 37 years, has promised to step down before the country’s elections in August. This is a good sign, though he has already decided on the person to succeed him.
A last important change for Africa this year will occur on January 20, when one of its sons – President Barrack Hussein Obama – steps down from the highest office in the United States. His record in Africa is chequered. Alongside several development projects, his administration has surreptitiously pushed its morally liberal agenda through threats and coercion throughout much of Africa. America was also eclipsed by China as Africa’s preeminent trade and development partner.
How President-elect Donald Trump handles this legacy is anyone’s guess but it will have an important impact on how Africa fares in 2017.
Africa is like everywhere else. Progress coexists with retrogression. Joy with sadness. Optimism with despair. As 2017 unfolds, how Africans navigate these complexities and maintain their humanity will showcase the best of the continent.
Mathew Otieno writes from Nairobi, Kenya.

In today's lead article MercatorNet's resident philosopher and associate editor Zac Alstin comes out as a fiction writer. Zac has already completed a fantasy story about a boy hero and is working on a sequel. He shares with us some of the insights he has gained into real life heroism and villany as well as its fictional expression. Congratulations, Zac! We look forward to seeing your work on Amazon.

Also today: Sheila Liaugminas pays a warm tribute to an outstanding civil libertarian, Nat Hentoff, who passed away last Saturday; Denyse O'Leary concludes her series on fake news, suggesting that any oficial attempt to clamp down on lies, hoaxes and other made-up stuff can only be bad news for the free press; and from Nairobi, Mathew Otieno surveys the threats and opportunities facing African countries this year.