The alt-right is peddling some bizarre theories 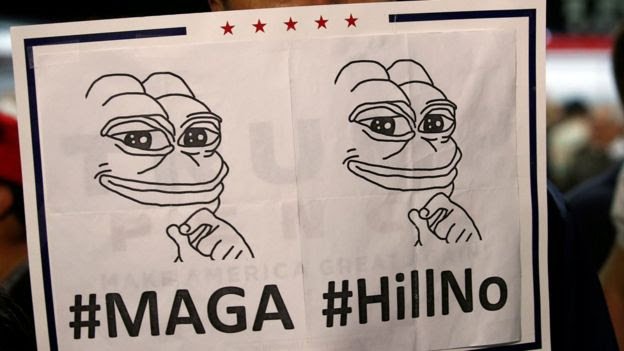 The Make America Great Again hastag with Pepe the Frog, a favourite character for internet trolls
Just recently, one Russell Kirk (probably a pseudonym*) blind-copied me on a post to “oxfordchristia” to advise me that

At first I thought, well, if young Christians want to live, they had better learn the difference between friends and foes, between life and death. But then, “Kirk” goes on to say,

Huh? I’m an oldster, and I well remember the huge role non-Marxist Christian institutions played in ending legal racial discrimination in mid-century North America. Christianity, applied, obviates racism because all are sinners and Christ died for all. In any event, how could Christians be better off fighting each other on the basis of race when so many atheists with global power—hostile to any serious religion—are arrayed against us all?
“Kirk” continues:

What is human biodiversity? Many younger, high IQ Christians have become very interested in human biodiversity. Modern studies in population genetics are showing that there are many differences in human populations. For example, Europeans about 8,000 years ago developed genes lactose tolerance that drastically changed their culture.

Yes, lactose tolerance made cheese a big deal in Europe. But does “Russell Kirk” really mean to compare that with, say, Magna Carta? The Edict of Toleration? Or the growing interest in natural philosophy (science), in terms of how Europe developed and influenced other parts of the world? Ideas that can be appropriated by anyone who wishes to take them up?
He points us to a site where we can learn more about human biodiversity, which can be summed up in two words: Race matters. Apparently, the slowly growing European-ancestry groups who feel this way call themselves the alt-right, the slogan for the "alternative right". As “Kirk” explains,

The alt-right is a right-wing youth movement. It's estimated there are about 4 million alt-righters in the USA and Europe. Their average age seems to be in the early 20s.

The youth may be angry about many things, including structural unemployment and the resulting inability to move out of Mom’s basement after they graduate, debt-laden, from college. As to their religious views:

Many alt-righters are Christian but they reject "cucked Christianity," i.e. Christianity that supports cuckoldry -- cuckoldry such as transracial adoption or supporting 3rd world immigration.

It is hard to immediately make sense of these claims. Why should people not adopt children of other races or support immigration, given compatible situations/values? We are informed that popular college majors for alt right youth are

That’s an interesting mix of practical (computer programming), largely bogus (evolutionary psychology), and not clearly relevant (classical languages). However, Germanic studies could mean something if it evokes Wagner far more than Tolkien.
“Kirk” is not explicit about whom aggrieved young American whites should vote for. Perhaps it doesn’t matter. Whatever the outcome, he wants them to form a grievance group, probably because their angry votes are more easily marketed in bulk.
Readers may naturally wonder why we have not heard more about the alt right recently. Why is it not daily denounced in mainstream media?
One complexity that prevents attack is that alt right supporters base their claims in large part on explicitly Darwinian evolution (survival of the fittest). They think they are more fit than persons of other races. Darwinian evolution is Cool and, in many places, mandated for the schools. Addressing the alt right would require addressing the way in which Darwinism has helped continue racism in public life.
Whoever wins the U.S. election Tuesday, confronting Darwinism won’t be easy.
Darwinism has only recently begun to be challenged in the sciences, particularly by the Royal Society in Britain, which is holding a major meeting, November 7-9, on rethinking evolution in the light of modern genetics. A serious challenge will probably outlast the election cycle, and it may be crucial for disempowering the alt right.
* Note: Russell Kirk was an American political theorist and writer (1918–1994), whose theses are outlined here, but they seem unrelated to race. I can find nothing for OxfordChristia on the internet. If you want to know more about the alt right, their journal is Radix. Here is some background from Milo Yiannopoulos.
Denyse O’Leary is an Ottawa-based author, blogger, and journalist.
Next: How pop science inadvertently kept racial theories alive in recent years.