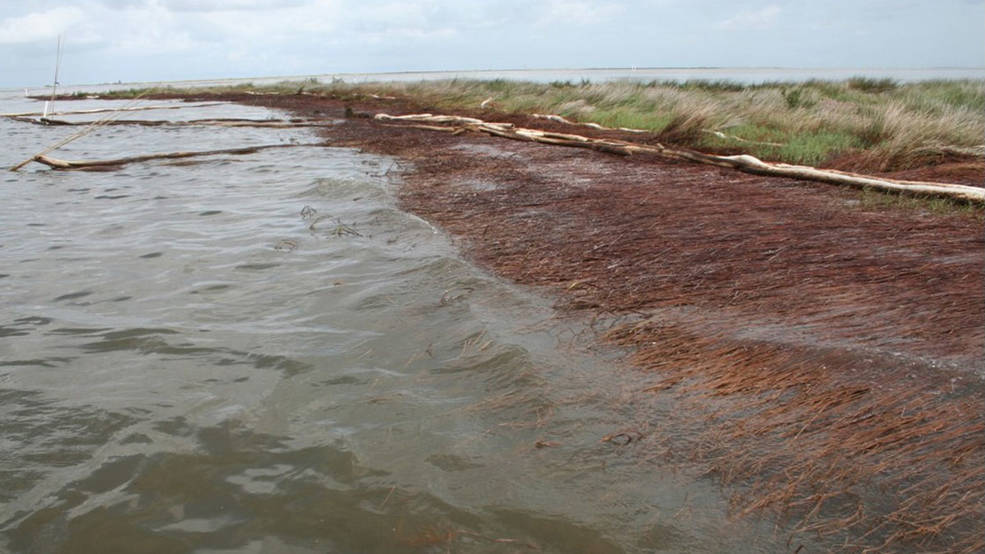 2010 photo of a shoreline in Bay Jimmy, Plaquemines Parish, Louisiana, impacted by the BP Deepwater Horizon oil spill. Oil weakens and kills vegetation, leading to the loss of roots that help hold soil together.
Credits: Bruce A. Davis, Department of Homeland Security
Dramatic, widespread shoreline loss is revealed in new NASA/U.S. Geological Survey annual maps of the Louisiana marshlands where the coastline was most heavily coated with oil during the 2010 BP Deepwater Horizon oil spill in the Gulf of Mexico.
Following the spill, the length of shoreline that receded more than 13 feet (4 meters) a year quadrupled compared to the year before the spill. The land losses occurred mainly in areas where oil had washed ashore during the spill.
A research team led by Amina Rangoonwala of USGS used airborne remote sensing imagery to analyze shoreline loss across nearly the entire upper Barataria Bay, located on the western side of the Mississippi River Delta, beginning a year before the spill and extending for 2.5 years after it. To determine whether the erosion was likely to be caused by the oil, they also compared shoreline loss linked to the deposited oil with shoreline erosion caused by high waves from Hurricane Isaac in 2012. 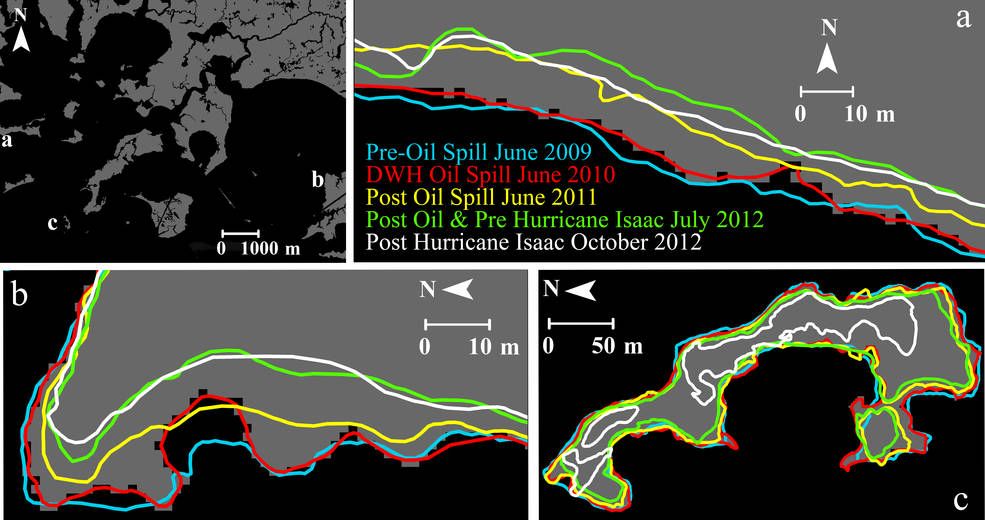 Barataria Bay, Louisiana, shoreline changes, June 2009 to Oct. 2012, after the oil spill and Hurricane Isaac: a) high loss Year 1 post-spill, decreased loss Year 2, little loss after Isaac; (b) high loss Years 1/2 post-spill, little loss after Isaac; (c) high loss that intensified during Isaac.
Credits: USGS/NASA-JPL/Caltech
The team found that although erosion occurred at isolated sections of the shoreline before the spill, the pre-spill shoreline (as analyzed from 2009 to 2010) was largely stable. In the first year after the spill (2010 to 2011), the erosion pattern changed dramatically from isolated to widespread. Erosion occurred mainly along shorelines with documented heavy to moderate oil coating. In the second year after the spill (2011 to 2012), the higher loss rates extended to areas that had less oil coating. Oil is known to weaken or kill vegetation, leading to loss of the roots that help hold soil together.
In August 2012, two months after the two-year post-spill period, Hurricane Isaac made a direct hit on Barataria Bay. Erosion rates measured in the four months after the hurricane were higher than those measured after the spill. But this erosion occurred primarily on just a few shorelines that before the spill showed evidence of heightened susceptibility to wave-generated erosion.
“Our study uniquely shows that the patterns of shoreline recession seen in this region can be directly related to distinctly different causes: broadly dispersed erosion due to oiling from the Deepwater Horizon spill, and enhanced, but spatially limited, erosion due to intense storm impacts,” said Rangoonwala. 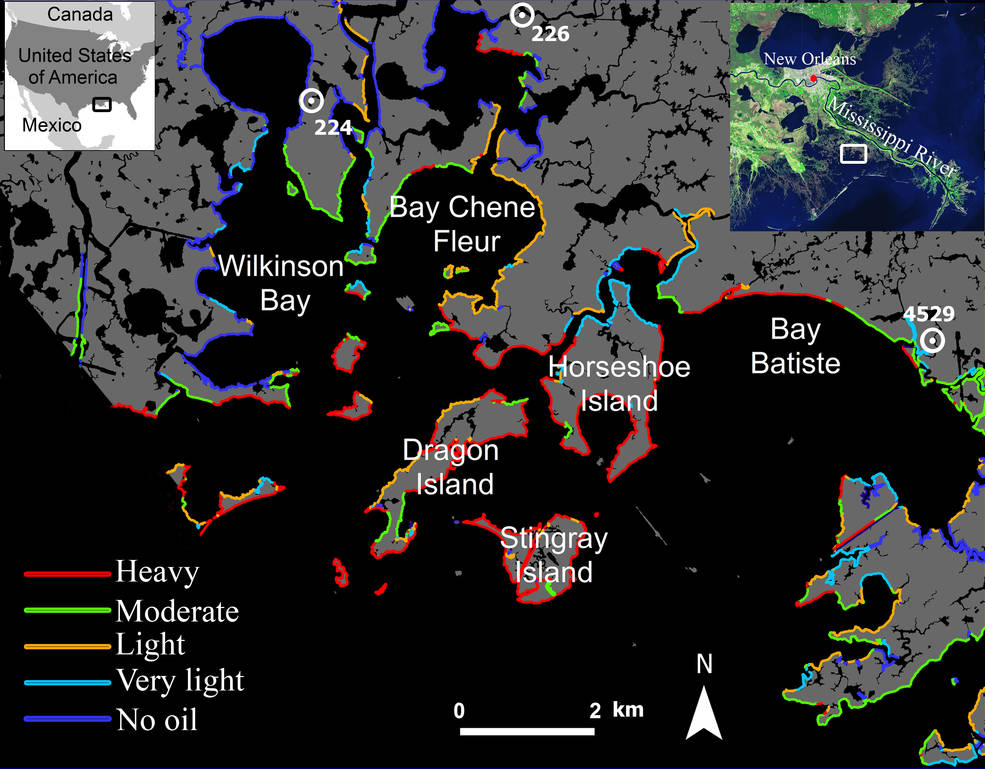 Map of Northeastern Barataria Bay, Louisiana, showing shores oiled by the Deepwater Horizon oil spill during May to July 2010. The severity of oiling is indicated by the colors. The information is derived from a 2014 NOAA Shoreline Cleanup Assessment Techniques (SCAT) map.
Credits: USGS/NOAA/NASA-JPL/Caltech
The wetland impacts of the spill documented by the team included both the loss of wetlands due to shoreline erosion, and island fragmentation, where small islands are broken into even smaller islands, creating more shoreline. Land lost from fragmentation is unlikely to be reestablished, particularly in this part of the Mississippi River delta where levees prevent an influx of new sediments from the river. This will alter natural coastal defenses against flooding.
The images collected in the annual surveys and following Hurricane Isaac were obtained from NASA’s Uninhabited Aerial Vehicle Synthetic Aperture Radar (UAVSAR), developed and managed by NASA’s Jet Propulsion Laboratory, Pasadena, California. UAVSAR flies on a C-20A research aircraft based at NASA's Armstrong Flight Research Center facility in Palmdale, California. UAVSAR’s polarized radar produced detailed representations of the marsh, which USGS scientists then used to develop a process to analyze the shoreline recession by mapping the change in shore location.
“Through this process, USGS and NASA scientists developed a repeatable, quantitative mapping method that will allow us to monitor shoreline erosion after oil spills in the future,” said study co-author Cathleen Jones of JPL. “Being able to compare shoreline losses in a year without any major storm to losses both after the Deepwater Horizon oil spill and after the hurricane was essential to correlating the erosion of the marsh to its underlying causes.”
The study, “Wetland shoreline recession in the Mississippi River Delta from petroleum oiling and cyclonic storms,” is published in the journal Geophysical Research Letters.
NASA collects data from space, air, land and sea to increase our understanding of our home planet, improve lives and safeguard our future. NASA develops new ways to observe and study Earth's interconnected natural systems with long-term data records. The agency freely shares this unique knowledge and works with institutions around the world to gain new insights into how our planet is changing.
Developed to test new technologies and study Earth surface dynamics, UAVSAR is informing the design and planning for a future spaceborne radar mission, the NASA-ISRO Synthetic Aperture Radar (NISAR), which is planned to image almost the entire Earth's surface at least once every 12 days.
For more information on UAVSAR, visit:
http://uavsar.jpl.nasa.gov/
For more information on NISAR, visit:
http://nisar.jpl.nasa.gov/
For more information about NASA's Earth science activities, visit:
http://www.nasa.gov/earth
Alan BuisJet Propulsion Laboratory, Pasadena, Calif.818-354-0474Alan.Buis@jpl.nasa.gov
Gabrielle Boudreaux BodinUSGS Wetland & Aquatic Research Center, Layfayette, Louisiana337-266-8655boding@usgs.gov
2016-296
Editor: Tony Greicius
Publicado por salud equitativa en 7:32