A big youth concert is being funded by corporations, among other sponsors. 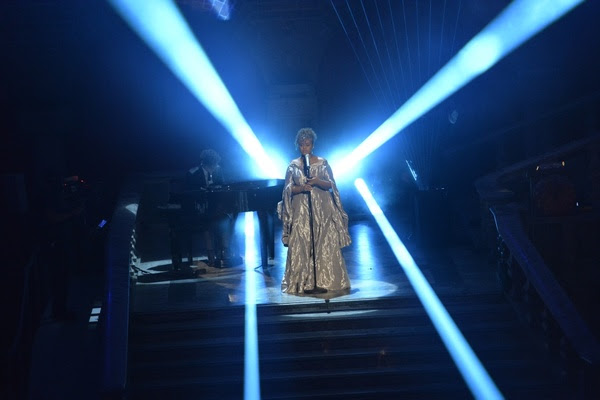 Seinabo Sey performing at the 2015 Nobel Banquet. Dan Lepp © Nobel Media AB 2015
Nobel Prize season, which kicks off today, involves more than just presenting prestigious prizes. Over the next three months, it’ll bring us a variety of events culminating in the massive, youth-oriented Peace Prize Concert on December 11, broadcast to over 100 countries and more than 500 million viewers.
In the past, the prizes have had something of an image problem. Traditionally, they have been given to mostly old, white men. The events around the accolades have also been very sombre and exclusive. To try to overcome this, the Nobel organisations have been steadily working to modernise the prizes’ image.
Some initiatives are small, like the “Speed Reads” provided on the Nobel Prize website. Others are much larger, including the Nobel Week Dialogue: a daylong series of expert discussions that are held for nonacademic audiences and streamed online. There are also plans to build a state-of-the-art new Nobel Center in Stockholm.
But not everyone appreciates the Nobel organisations’ efforts. The most vocal critic has been the Norwegian jurist and peace activist Fredrik Heffermehl. Writing about the Peace Prize in particular, he has argued that the new communication activities diminish the “character, integrity, and independence” of the prize. Laureates at the 2015 Nobel Prize Ceremony. Alexander Mahmoud © Nobel Media AB 2015
More entertainment
The criticisms have not deterred the Nobel organisations. Recently, they have ramped-up the entertainment factor in their productions. The Peace Prize Concert is now edgier, youth-focused and more inclusive. Its new tagline is “Peace is Loud”. Last year, it featured international artists such as America’s Jason Derulo, the Singaporean-born Norwegian Kygo, and Denmark’s MØ, and was hosted by Jay Leno.
Highlights from last year’s Nobel Peace Prize Concert.
The Norwegian indie band Highasakite and the American singer Halsey are the first acts to be confirmed for this year’s concert. The organisers have also announced that they are increasing audience capacity at Telenor Arena to 10,000 and offering specially priced youth tickets.
Heffermehl has noted that these popular communication activities have required funding from external partners and sponsors, many of them being corporations.
The Nobel organisations are hamstrung in this respect by Alfred Nobel’s last will. The document (signed in 1895) restricts how the organisations can use the money he left behind. They have no choice but to rely on external funding for their new communication activities; major partners include 3M, Ericsson and Volvo.
Heffermehl has pointed out that relying on such partners potentially weakens the Nobel organisations’ independence. He has also criticised the Peace Prize, specifically, for becoming “ruinously corrupted by commercial thinking”. Other critics in Norway have said the concert “trivialises the gravity” of the prize.
Another major event that’s been updated is the annual Nobel Banquet. In the past, the very formal multi-course dinner (complete with speeches and toasts) has been broken up by performances from ballet groups and opera ensembles. Last year, the organisers opted for more modern entertainment, including songs (in English) from the Swedish-Gambian soul-pop singer Seinabo Sey and Sweden’s Anna Ternheim.
Seinabo Sey’s performance at the 2015 Nobel Banquet
The changes to these various activities follow a clear shift in the Nobel organisations’ communication planning. In research interviews, executives from the organisations explained to me that they now want to inspire and educate audiences – particularly young people – and not just transmit information about the prizes and laureates.
More controversies and challenges
For all that, it’s an uphill struggle to balance the lightness of popular entertainment with the seriousness of the prizes.
The accolades themselves are tricky to communicate. The prizes are given in six very different fields: physics, peace, chemistry, literature, economic sciences, and physiology or medicine. The achievements behind them (especially in the scientific fields) are usually highly technical and difficult to explain in simple terms. While the Nobel Medal and Diploma can be captured visually, the prize money (currently set at 8 million Swedish Crowns, or just over AU$1.2 million, per prize) is never actually shown.
Alfred Nobel – the Swedish industrialist best known as the inventor of dynamite – intended that the prizes be awarded for achievements that “have conferred the greatest benefit to mankind [sic.]”. What exactly “the greatest benefit” means is quite subjective, of course.
But there’s the dignity and authority of the 115-year-old Nobel brand to be safeguarded. This has taken a slight battering in the last couple of months over the latest project: the proposed Nobel Center. The building (due to open in Stockholm in 2019) will serve as a sophisticated new home for the prizes, providing a space for exhibitions, lectures and performances. The Nobel Foundation also hopes that it will host the iconic annual prize-giving ceremony. The proposed Nobel Center. Nobel Center / David Chipperfield Architects
However, the 130-million-euro project has been engulfed in controversy. Some critics have called the building “a brass-coloured nuclear power plant”. Even Sweden’s King Carl XVI Gustav has criticised the design for being “gigantic” and located in the wrong place.
The new communication efforts also face the perennial challenge of gender equality. Year in, year out, the prizes still go largely to men: generally white, old, men.
The prizes are notorious for their gender-imbalance. (A Fortune analysis last year highlighted that, since they were first awarded in 1901, women have won a Nobel 49 times, men 825 times, and organisations 26 times.)
Even though this trend reflects the broader gender imbalance in the prize-awarded fields, it creates a slight image problem when the laureates receive their prizes each year. (Five out of the six prizes are also presented by the King of Sweden: another white, old man.)
It remains to be seen whether the Nobel organisations can resolve the issues raised by critics, and find the right balance between entertainment and commerce.
For now, as Nobel season opens with its dramatic announcements, we can watch the annual spectacle unfold. Let the show begin.
This year’s Nobel Prizes will be announced from Monday 3 October. The Nobel Peace Prize Concert will be held on December 11.

Lukasz Swiatek, Researcher, University of Sydney
This article was originally published on The Conversation. Read the original article

The Nobel Prize season kicks off today with the announcement of the 2016 prize for medicine. Some 273 scientists have been nominated for this one honour, according to @NobelPrize, which also informs us that the average age of medicine laureates has climbed from 58 to 67 over the past century -- a fact which contributes to the view of the the prizes as an affair of "old white men".
That is an image the Nobel organisations are anxious to change. It's not easy because the achievements behinds the prizes -- especially in the scientific fields -- are usually highly technical and difficult to explain. (The sorts of things that cause men, and a few women, to grow old and white while they work at them for decades.)
But in an article today Australian researcher Lukasz Swiatek describes how the organisers are reaching out to non-academic audiences and in particular youth. The Peace Prize Concert, for example, is going to be bigger and louder than ever this year. Not everyone is happy with this trend -- not just because it lacks gravitas but because of of the commercial interests it involves. Is the Nobel enterprise on the right track? Tell us what you think