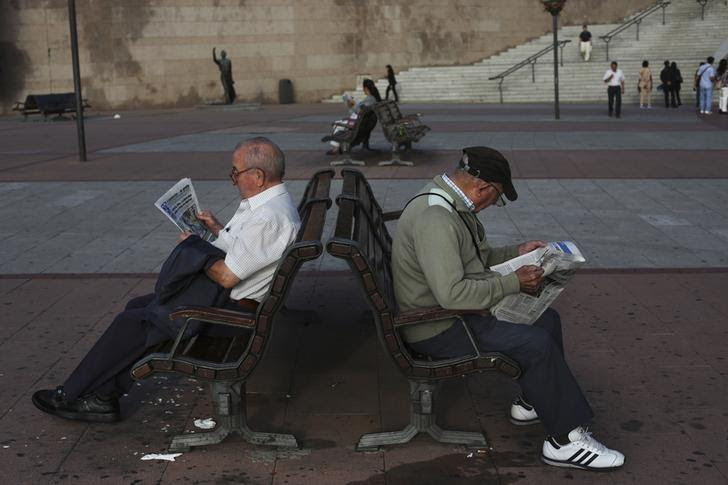 Almost a year ago we reported that more Spainards were dying than were being born. Now it seems as if this is the new normal for the country. According to the Guardian, a new report released by the Spanish national statistics office contains "not so much predictions but references to the way things might evolve” in Spain by 2050 (the words come from one of the authors of the report). And the evolution isn't pretty. In 34 years (not too long in the scheme of things) Spain's population will be significantly smaller, it will be older, it will consist of more single people, there will be fewer children and women will be having their babies at a later age (although on average they will be having slightly more children). In short, Spain will be experiencing a future similar to many other European nations.
The details are these: Spain will be 11% (5.3 million people) smaller than it is currently. Incredibly, of the 41 million Spainards in 2050, over a third will be over the age of 65 (34.6%) and nearly 250,000 will be centenarians. There will be nearly two million fewer children under the age of 10 than there are today. Not only will the population be top-heavy, it will also consist of smaller households. 28% of the country's households will contain only one person, while another third will be two-person households. Just think about that, over half of the country's households will consist of someone living by themselves, or a couple (presumably couples without children, or those with grown-up children). The notion of Spain as a country of large families and households bulging at the seams with many generations of family members is becoming an outdated one!
While women will be having slightly more babies (1.38 instead of the current average of 1.33) this will still be far below the replacement rate of about 2.1 and so Spain's natural population decrease will be showing no sign of stopping. The average age at which women will be having their first child will also have increased from 31.9 to 33.
And what about immigration? Although Spain from 2000-2010 experienced large numbers of migrants from North Africa, Latin America and elsewhere in Europe, since the economic downturn many of those migrants have returned home while large numbers of native Spainards have themselves emigrated for work. This is expected to reverse slightly and until 2050 the report predicts that slight net immigration will occur each year. That is, assuming that the EU does not come up with some grand redistribution scheme for the hundreds of thousands of migrants trying to get to Europe.
Nothing is particularly new in any of these figures, but once again a picture is becoming clearer of a European country that is suffering from demographic decline and ageing, a population increasingly childless and living alone.

The disappearance of moral consensus from Western society has turned us all into social scientists spouting the latest study to support our values. But not even “data” can end arguments over issues like abortion, euthanasia and same-sex parenting.
Mark Regnerus, a professor of sociology at the University of Texas at Austin, knows that better than most people. More than four years since his New Family Structures Study on same-sex families was published, he continues to be criticised, indeed vilified, by peers and activists alike for findings which contradict a cosy consensus that there are “no differences” between the children from same-sex and opposite-sex households.
However, he is not about to give up. In today’s Public Discourse essay Professor Regnerus explains carefully and dispassionately the shaky ground on which the consensus rests. It will be worth your while to memorise a few critical facts from this piece for your next after dinner debate or letter to the editor.
Also today: Michael Cook introduces the best political advertisement of 2016 (video, none of the usual suspects); Emily Watson reviews a C.S. Lewis classic; Alistair Nicholas plugs for The Donald; Matthew Hanley fills in some gaps in breast cancer information; and Marcus Roberts contemplates a gloomy population outlook for Spain.
Enjoy your weekend!