MercatorNet: The rise of eco-homes

MercatorNet: The rise of eco-homes

The rise of eco-homes

Would you live in one?

0 shares
Share on FacebookShare on Twitter Newsletter
Most people have moved on from the inaccurate and easy answer that there are simply too many people, to more creative environmental solutions.  This is also the most effective option, as it is an uncomfortable fact that the richest 10% of people produce half of Earth’s climate-harming fossil-fuel emissions, while the poorest half contributes a mere 10% according to Oxfam.  Oxfam has commented that its analysis “helps dispel the myth that citizens in rapidly developing countries are somehow most to blame for climate change.”  Added to this is the fact that almost all of world’s future population growth will be in Africa where people currently use much fewer resources.
Just one creative idea on the rise is increasing interest in houses which actually produce energy and sell it back to the grid through their own production and highly efficient use of energy.  Green building concepts help save water through rainwater harvesting and recycling of waste water, and achieve huge savings in water and energy. Here is an example of one in England that the Daily Mail reported on recently.  It produces so much electricity that it has no heating bills, and the national grid actually pays the owners 1500 pounds a year: 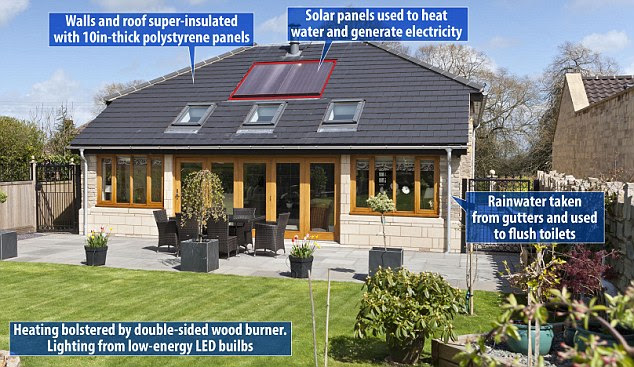 With the goal of making sustainable homes more aesthetically appealing, convenient, and ultimately affordable to the average homeowner, wealthy inventor Elon Musk, originally the founder of Paypal, announced plans last month to develop traditional roofs made entirely from solar panels.  We will likely see more ideas as these coming to market which make eco-homes more accessible and attractive to all.
However, it is the Indian state of Tamil Nadu that is now home to the world's largest solar power plant, with Adani Group chairman Gautam Adani commenting:
"We are extremely happy to dedicate this plant to the nation; a plant of this magnitude reinstates the country's ambitions of becoming one of the leading green energy producers in the world."
In 2014, Indian Prime Minister Narendra Modi announced plans to increase solar power capacity to 100 gigawatts by 2022, five times higher than the previous target.
Both China and India - often thought of as high-population / high-pollution countries - are increasingly interested in green building and technology.  For instance, India offers incentives and concessions for green building developments and the Chinese government has established a goal of having green buildings account for 30 percent of new construction projects by 2020.
Watch this space.  Eco-homes might be the way of the future.

The Nobel Prize season kicks off today with the announcement of the 2016 prize for medicine. Some 273 scientists have been nominated for this one honour, according to @NobelPrize, which also informs us that the average age of medicine laureates has climbed from 58 to 67 over the past century -- a fact which contributes to the view of the the prizes as an affair of "old white men".
That is an image the Nobel organisations are anxious to change. It's not easy because the achievements behinds the prizes -- especially in the scientific fields -- are usually highly technical and difficult to explain. (The sorts of things that cause men, and a few women, to grow old and white while they work at them for decades.)
But in an article today Australian researcher Lukasz Swiatek describes how the organisers are reaching out to non-academic audiences and in particular youth. The Peace Prize Concert, for example, is going to be bigger and louder than ever this year. Not everyone is happy with this trend -- not just because it lacks gravitas but because of of the commercial interests it involves. Is the Nobel enterprise on the right track? Tell us what you think