Rural Women Are Essential to the Struggle Against Hunger

Print | Send by email |En español
This article is part of a series of stories and op-eds launched by IPS on the occasion of this year’s International Women’s Day on March 8. 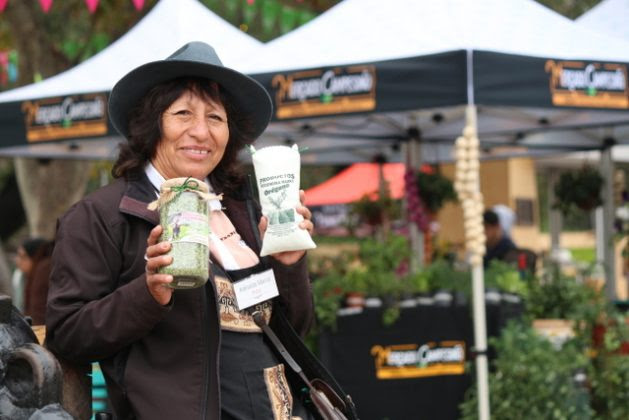 Adelaida Marca, an Aymara indigenous woman, has been successful at the Rural World Expo in Santiago selling her sought-after premium oregano, which has a special fragrance, grown on terraces in Socoroma, her village in the highlands of northern Chile. Credit: Indap
SANTIAGO, Mar 3 2018 (IPS) - Adelaida Marca, an Aymaran indigenous woman who produces premium oregano in Socoroma, in the foothills of the Andes in the far north of Chile, embodies the recovery of heirloom seeds, and is a representative of a workforce that supports thousands of people and of a future marked by greater gender equality.
“They asked me for oregano that was completely clean, without sticks and very green. I achieved that quality at the altitude where we live, at 3,000 metres above sea level,” the 54-year-old family farmer told IPS.
Proudly, she emphasises that her oregano “is an ancestral legacy: the seeds I inherited from several generations of ancestors.”
"If I live off the earth, I can survive. But how do I educate my children and grandchildren? The earth bears fruit, but it does not generate money. If I sell what I get from the land raw, it has no value, but if I cook it, it has added value.” -- Juana Calhuaque
“We grow our crops on terraces. Last year I had one hectare planted, but since oregano is fragile at low temperatures, I lost a third of my crop. The Bolivian winter (rainy season) helps alleviate the water shortages,” she said.
Marca named her oregano Productos Socoroma Marka, and presented it successfully at the Rural World Expo, held in Santiago last October, running out of stock in just two days.
For this year’s International Women’s Day, on March 8, UN Womendecided to focus on the theme “Time is Now: Rural and urban activists transforming women’s lives”.
UN Women stated that “Rural women and their organisations represent an enormous potential, and they are on the move to claim their rights and improve their livelihoods and wellbeing. They are using innovative agricultural methods, setting up successful businesses and acquiring new skills, pursuing their legal entitlements and running for office.”
Rural women make up more than a quarter of the world’s population and 43 percent of the world’s agricultural labour force, according to UN Women.
In Latin America and the Caribbean, according to 2010 data from the United Nations Food and Agriculture Organisation (FAO), women’s make up between 12 and 25 percent of the economically active population in agriculture, depending on the different areas.
The urgent need to empower rural women
Julio Berdegué, FAO representative for Latin America and the Caribbean, told IPS that “rural and indigenous communities have a crucial role to play in food security, first of all for their own peoples. The persistence of hunger is very high in indigenous populations. In many countries it doubles, triples or quadruples the national averages.”
Anamuri, a model for rural producers

"Our first demand is healthy and clean production and the right of each person to consume healthy food," said Alicia Muñoz, of the National Association of Rural and Indigenous Women (Anamuri), one of the leading Latin American organisations that defends women farmers.

"If you dig into the peasant and indigenous communities, you see the historical wisdom of highly aware women very knowledgeable about healthy foods for humanity," the well-known activist told IPS.

"The role of Anamuri aims at the incorporation of women in society and in organisations and how the production of these women is channeled today, so that society as a whole learns to distinguish what healthy food means compared to a diet with artificial and genetically modified food," Muñoz explained.

The other important demand that mobilises Anamuri, she said, "is decent work for people, which means well-paid and in healthy conditions, and not surrounded by pesticides and chemicals where people get sick.”

And at the global level, the organisation aims at "local markets for the community... for people to not have to go out to a supermarket, and for the peasants themselves to have their local markets and supply consumers in the communities."

"If in each locality there are gardens and grocery stores, but produced by women, peasants and small farmers, this will change. To this end we are coordinating with other rural organisations to get people to understand that peasant and family agriculture will save the planet," she said.
“if indigenous communities are not central actors, there is no way to solve hunger in those places,” he added at the regional headquarters in Santiago.
“In these communities we have an important issue of gender inequality, and inequality in access to land, access to political power within local communities, and access to participation, and that is a sensitive issue because of the norms and customs of native peoples,” he said.
“The empowerment of indigenous women is part of the agenda in the fight against rural poverty, poverty and hunger in indigenous communities,” he said.
For Juana Calhuaque, from Curarrehue, in the southern Chilean Araucanía region, “the land is good, it provides everything. But the problem is you have to sell it in order to have an income.”
“If I live off the earth, I can survive. But how do I educate my children and grandchildren? The earth bears fruit, but it does not generate money. If I sell what I get from the land raw, it has no value, but if I cook it, it has added value,” Calhuaque, who belongs to Chile’s largest indigenous group, the Mapuche, told IPS.
She opened a small shop where she prepares meals using mushrooms, including the widely-sought after digueñes (Cyttaria espinosae), pine nuts and other products native to her land, which she harvests or grows herself.
“I prepare the dishes myself. I just need more people to come and that’s why I want to be interviewed on TV,” she said.
Marca, for her part, used the profits from her oregano venture, backed by the governmental Agricultural Development Institute (Indap), to get involved in rural tourism in Socoroma, in the region of Arica, on the northern tip of this narrow, long South American country with a population of 17.6 million.
Oregano “allowed me to improve my living conditions and fulfill my dream of showing the territory through tourism. In Socoroma I am restoring my grandfather’s house, which must be more than 150 years old, to put it at the service of the city.”
One problem that Marca faces is “the labour shortage, because work in agriculture is very hard.” Another is “transportation, because it’s hard to deliver the orders and I cannot send them by plane.”
Oregano “is one of the few plants that produces twice a year, which allows us to rotate crops,” she explained. The next harvest is in March and April.
The market plays in her favour because “the oregano is reaching its real value because it is a natural product, not genetically modified and without chemicals.”
“I grow it the traditional way, in bulk and harvesting by hand” she said.
“The difference between daytime and nighttime temperatures is really big here. This contrast enhances the flavour and aroma of our product. And the natural fertiliser I use makes this product stand out from others. My oregano is very aromatic,” she said.
For UN Women, cases such as those of Calhuaque and Marca “guarantee the food security of their communities and generate resilience to climate change.”
The agency warns, however, that “in practically all development measures, rural women are lagging behind rural men or urban women, as a consequence of deep-rooted gender inequalities and discrimination.”
“Less than 20 percent of the people in the world who own land are women, and although the global wage difference between women and men stands at 23 percent, in rural areas it can reach up to 40 percent,” it stated, to illustrate