The Silent Victims of Domestic Violence in Georgia

Print | Send by email
This article is part of a series of stories and op-eds launched by IPS on the occasion of this year’s International Women’s Day on March 8.
ROME, Mar 2 2018 (IPS) - As a student in Rome, the closest event that left a mark in my life was the Women’s March in the Italian capital. The march allowed me to contribute to the empowerment of women and to demonstrate that no woman is free– even if one’s rights are being violated. #MeToo. 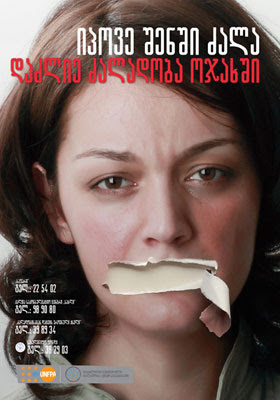 Domestic violence thrives in a culture of silence. A broad-based campaign in Georgia aims to bring the issue out into the open. Credit: UNFPA
As a woman born and raised in Georgia, I know what it is like to live in a patriarchal society where women have to fight for self-identification. Despite the fact that Georgian women have received more voice in society and filled more workplaces, the problem of gender inequality still exists. And this problem is the most significantly expressed in domestic violence.


Even though the issue of domestic violence has received public attention and few shelters have opened for the victims, the problem still remains unspoken. Until 2014, I myself believed that domestic violence was non-existent in Georgia because nobody talked about it.
However, little I knew how actively present it is in Georgian women’s lives. I remember one day, listening to my parent’s conversation while they were talking about their mutual male friend. My mother suddenly jokingly mentioned how this male friend physically abused his wife only because she ironed his shirt poorly. This is when I felt astonished, angry and frustrated at the same time.
First, I was shocked to hear about domestic violence happening in the friend’s family. Second, I was angry that my mother mentioned the story in a funny way, completely ignoring women’s solidarity and basic human rights. Finally, I was frustrated that my parents were inactive while acquiring this kind of information.
This event forced me to think how Georgian society treats domestic violence and allowed me to open my eyes wider in order to see other instances happening in front of me. For example, later I found out that my Godmother was physically abused by her ex-husband too. However, she was smart enough to leave after the first instance.
The problem of domestic violence has gone viral only in 2014, after 33-year old female lecturer, Maka Tsivsiradze, was shot dead by her ex-husband at Ilia State University in Tbilisi. The UN-funded research suggests that one in every eleven married woman in Georgia is a victim of domestic violence.
At the same time, it should be recognized that this number is depicted from the cases which have been reported while there might be thousands of victimized women who stay silent. In accordance to the UN Population Fund (UNFPA), 75% of Georgian women see domestic violence as a private matter which prevents the resolution of the problem and the acquisition of the exact data.
In order to solve the problem, it is important to find the cause. According to the psychologist Lela Tsiskarashvili, who works in the Centre for Victims of Torture, low self-esteem of unemployed Georgian men is one of the main reasons of domestic violence. She states that the economic crisis brought by the collapse of the Soviet Union shifted the gender roles, leaving men unemployed while transforming women into street vendors. Despite the fact that women have become the sources of income, the social structure of Georgian family remained the same with men on the top.
The 2015 Report on Violence Against Women and Domestic Violence in Georgia incorporates information received from the Ministry of Internal Affairs of Georgia (MoIA). This information suggests that in 2014 there were 92,901 emergency calls to “112” regarding domestic violence.
Apart from this, there were 350 prosecutions for domestic violence, 902 restrictive orders approved, and 87 protective orders issued. These numbers are very high for the nation with the population of 3,718,200.
Even though, there is no report of 2017, the Deputy Public Defender, Eka Skhirtladze, notes that out of eleven cases of attempted murder, eight were identified as domestic violence which demonstrates that the problem is still serious.
However, despite this fact, there is also positive news. For instance, in 2016, the first domestic violence crisis centre opened in Georgia while more and more women start to report about the cases.
According to President Giorgi Margvelashvili, who spoke at the international conference on ‘Femicide Cases Monitoring Tools and Mechanisms: “We should realize that femicide is an issue for our entire society. Many problems can be prevented by adopting legislative amendments or carrying out new policies; however, today I would like to address Georgian society: you play a crucial role in preventing violence against women.”