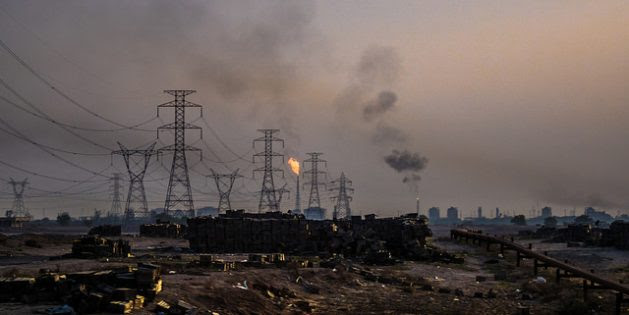 In 2017, Iran’s oil exports came close to 1 billion barrels. Pictured here are oil fields in West Iran. Credit: Nicholas V.
UNITED NATIONS, Mar 30 2018 (IPS) - Over the last few months, the United States’ rhetoric on the Iran nuclear agreement has been ambiguous, creating an uncertain environment for investors. With John Bolton, President Donald Trump has now appointed a national security adviser who is actively seeking to leave the Iran deal.
In December 2017, a new wave of protests swept Iran’s cities. As the uprising movement faced repression, more than 25 people ended up dead in a few days. Many of them died in prison; the official story is they all committed suicide.
As these escalations caught most by surprise, there is a significant difference in the Iranian Green Movement. A movement much larger than the recent one, the Green Movement wasn’t as widespread as the December protest and mainly showcased within the city borders of Teheran.
The 2017 unrest, however, took place in small to midsize cities across the country and featured a different demographic. While the Green Movement is considered a middle-class movement, the recent uproar is one of Iran’s working class.
Iran’s economic crisis led many companies to lose money and workers to lose their pensions. The triggering factors for the protests, primarily political and economic, can be linked to the Joint Comprehensive Plan of Action – the Iran nuclear deal.
“Unemployment is a very critical factor in all of this. Then you have Rouhani going to the Parliament and hinting at the new budget and what it would look like,” Trita Parsi, author of ‘Losing an Enemy – Obama, Iran, and the Triumph of Diplomacy,’ told IPS. “You have a tremendous deep frustration in the population with things such as corruption and mismanagement.”
This frustration escalated seven months into moderate President Hassan Rouhani’s second term after he beat the Conservatives in a landslide, even though the Rouhani administration faced accusations they had promised more than the sanctions relief did for the Iranian economy. Surveys show that the promised economic benefits of the deal were significant and so was breaking out of isolation and not finding themselves in a situation in which the risk of war with the United States would be a constant presence.
“That, the deal has achieved,” Parsi said. “The expectations where the economy would go after the deal, however, were not met. Despite that though, there was still strong support for [Hassan Rouhani], partly because the majority opposed the alternative which was a return to conservative rule.”
So it wasn’t the situation Iran which drastically changed, it was the United States’ Iran policy. While the nuclear agreement went into effect under Barack Obama, the new administration takes a two-track approach to the nuclear deal as they renegotiate with allies as well as prepare to withdraw from it.
“If you take a look at Iran’s economy on paper, it looks as if it’s doing quite well. There’s a growth of roughly six and a half percent. Well, that growth is almost entirely because of oil sales. As a result of the deal, they were capable of selling oil again, and it’s probably the only area in which they have been able to go back to the pre-sanction years,” Parsi said. In 2017, Iran’s oil exports came close to one billion barrels. “But oil sales do not create jobs.”
In the absence of job creation, Iran’s unemployment rate continues to increase, especially among young people and particularly among young women. “Combined with the fact that this is a highly educated population, you have a lot of people with two master’s degrees driving the Iranian version of Uber,” Parsi added.
Even though Iran’s economy is growing, its population is still stagnant as job-creating investments aren’t taking place. Companies interested in the Iranian market face the problem that they can’t find financing as none of the major banks are willing to invest as they fear the United States’ withdrawal from the nuclear agreement and new sanctions.
“Many job-creating projects are five to seven years long, and banks are not charities. They want to have some degree of security and certainty that the deal will be in place for that period but they can’t even get four months of security because Donald Trump is constantly saying he will not renew the sanction waivers,” Parsi said.
The waivers temporarily deactivate the sanctions on Iran and are part of the nuclear agreement. Many, Trita Parsi included, expected Trump not to renew them but then the President pushed back the original January deadline for his administration and its European allies to agree on renegotiations to May 12.
“The White House strategy is to infuse uncertainty which is already working because now you see protests in Iran. All they need to do is to continue to constantly make everyone guess if they renew the waivers or not.”
The United States is not the only party to the deal – European banks and entities are as well.
“Those sanctions are targeting countries trading with Iran which means Europe, China, India, and Asia,” according to Parsi. “The question then is will Europe stand firm and continue to honor the deal?”
To do so, Europe would have to revive 1990s-era sanction blocking mechanisms as already suggested by David O’Sullivan, EU ambassador to the United States. This threat, however, will most likely remain empty as it essentially means the United States sanctions Europe and Europe sanctions the United States to block the secondary sanctions on Iran. These blocking mechanism would shield companies from U.S.-imposed fines, but they can’t shield European banks from losing access to the American market. “Would I choose the Iranian over the U.S. market? I would not,” Parsi stated.
And it’s that uncertainty preventing banks and businesses from coming in, in effect imposing de facto sanctions on Iran and paralyzing its economy.