China taking first steps to pay for oil in Yuan this year: Sources | The Indian Express

China taking first steps to pay for oil in Yuan this year: Sources | The Indian Express

China taking first steps to pay for oil in Yuan this year: Sources

Regulators have informally asked a handful of financial institutions to prepare for pricing China's crude imports in the yuan, said the three sources at some of the financial firms. 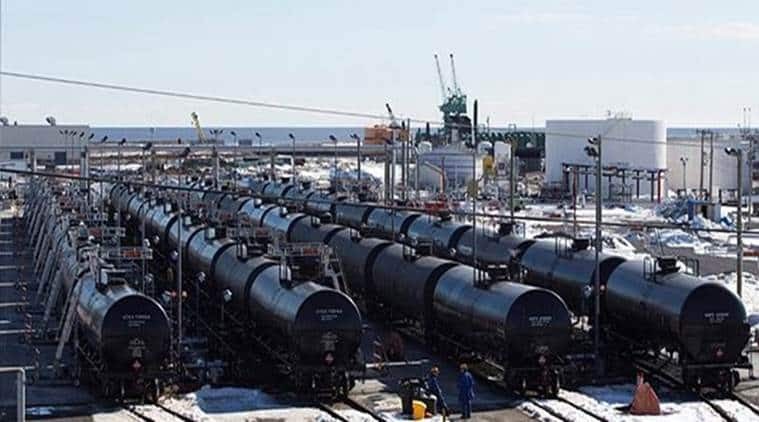 China is the world’s second-largest oil consumer and in 2017 overtook the United States as the biggest importer of crude oil. (Representational)
China is taking its first steps towards paying for imported crude oil in yuan instead of the US dollar, three people with knowledge of the matter told Reuters, a key development in Beijing’s efforts to establish its currency internationally.
Shifting just part of global oil trade into the yuan is potentially huge. Oil is the world’s most traded commodity, with an annual trade value of around $14 trillion, roughly equivalent to China’s gross domestic product last year.
A pilot programme for yuan payment could be launched as early as the second half of this year, two of the people said.
Regulators have informally asked a handful of financial institutions to prepare for pricing China’s crude imports in the yuan, said the three sources at some of the financial firms.
“Being the biggest buyer of oil, it’s only natural for China to push for the usage of yuan for payment settlement. This will also improve the yuan liquidity in the global market,” said one of the people briefed on the matter by Chinese authorities.
China is the world’s second-largest oil consumer and in 2017 overtook the United States as the biggest importer of crude oil. Its demand is a key determinant of global oil prices.
Under the plan being discussed, Beijing could start with purchases from Russia and Angola, one of the people said. Both, like China, are keen to break the dollar’s global dominance.
Russia and Angola are two of the top suppliers of crude oil to China, along with Saudi Arabia.
The move would mark a major step in reviving usage of the currency of the world’s second-largest economy for offshore payments after several years of on-again, off-again measures.
If successful, it could also trigger shifting other product payments to the yuan, including metals and mining raw materials.
All three sources, who spoke to Reuters on the condition that they not be named, said the plans were at early stages. Officials at some of China’s state oil companies said they had not heard of such plans.
CRUDE FUTURES
The plans coincide with this week’s launch of the first Chinese crude oil futures in Shanghai, which many expect to become a third global price benchmark alongside Brent and West Texas Intermediate crude.
Shanghai’s new crude contract is traded in yuan.
Besides the potential of giving China more power over global oil prices, “this will help the Chinese government in its efforts to internationalise renminbi (yuan),” said Sushant Gupta, research director at energy consultancy Wood Mackenzie.
Unipec, trading arm of Asia’s largest refiner Sinopec , has already inked a first deal to import Middle East crude priced against the newly-launched Shanghai crude futures contract.
US bank Goldman Sachs said in a note to clients this week that the success of Shanghai’s crude futures was “indirectly promoting the use of the Chinese currency.”
People’s Bank of China (PBOC), the country’s central bank, did not respond to a Reuters request for comment on the plan. The Ministry of Commerce (MOFCOM) also declined to comment.
INTERNATIONALIZATION
China’s plan to use yuan to pay for oil comes amid a more than year-long gradual strengthening of the currency, which looks set to post a fifth straight quarterly gain, its longest winning streak since 2013.
The yuan retained its No.5 ranking as a domestic and global payment currency in January this year, unmoved from a year ago, but its share among other currencies fell to 1.7 percent from 2.5 percent, according to industry tracker SWIFT.
A slew of measures put in place in the last 1-1/2 years to rein in capital flowing out of the country amid a slide in yuan value has taken off some its shine as a global payment currency.
But the yuan has now appreciated 3.4 percent against the dollar so far this year, with solid gains in recent sessions.
“For PBOC and other regulators, internationalization of the yuan is clearly one of the priorities now, and if this plan goes off smoothly then they can start thinking about replicating this model for other commodities purchases,” said the person briefed on the matter.
It would not be easy, however, for China to shift the bulk of its commodity purchases to the yuan because of the currency’s illiquidity in forex markets.
Nearly 90 percent of all transactions in the $5 trillion-a-day currency markets involve the dollar on one side of a trade, while only 4 percent use the yuan, as per a triennial forex survey by the Bank for International Settlements.
For all the latest World News, download Indian Express App
Publicado por salud equitativa en 5:14