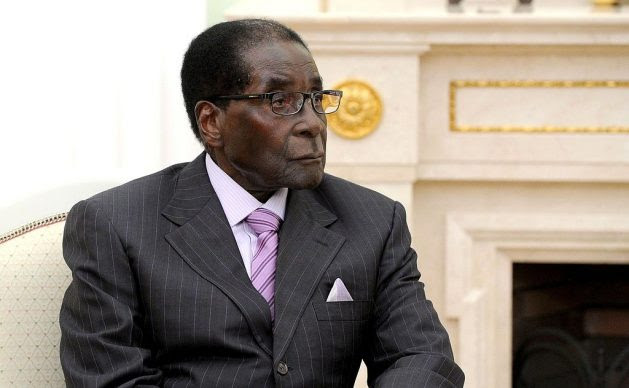 Former President Robert Mugabe in 2015. From early 1983 to late 1987, the Zimbabwe National Army carried out a series of massacres of Ndebele civilians called the Gukurahundi, deriving from a Shona language term which loosely translates to "the early rain which washes away the chaff before the spring rains". Credit: www.kremlin.ru./cc by SA 3.0
BULAWAYO, Mar 26 2018 (IPS) - With Zimbabwe’s new President Emmerson Mnangagwa just concluding a 100-day timeline to address what he considered the country’s most pressing issues, which focused on economic revival, human rights activists have their own timeline.
Survivors of the 1980s Gukurahundi atrocities, where a campaign by government soldiers claimed thousands of civilian lives, are demanding that the new president address the country’s dark past.
"People want to be able to openly express their pain without being policed and told to 'get over it.' A gross human rights violation occurred." --Velempini Ndlovu
Activists accuse President Mnangagwa, serving military and top government officials of perpetrating crimes against humanity more than three decades ago and see Mnangagwa’s rise to power as an opportunity that was denied them by former President Robert Mugabe to address the atrocities, which various researchers say claimed up to 20,000 lives.
Mugabe, accused of ordering the brutal campaign against civilians, notoriously brushed off what others have called a genocide as a “moment of madness” and refused to issue an apology.
In the past while still serving under Mugabe, Mnangagwa raised the ire of surviving victims and relatives of the Gukurahundi killings when he appeared to dismiss calls for a Truth and Reconciliation Commission by telling the nation that there was no need to revisit that troubled past.
Modelled along South Africa’s TRC which sought closure on apartheid-era human rights violations, disappearances and state-sponsored political murders, the commission would see perpetrators coming forward and giving public apologies in what researchers have called restorative justice.
Instead of getting prison terms, the perpetrators would get amnesty and pardons from their victims.
Charles Gumbo is one such Gukurahundi survivor. He has bayonet scars on his head and is now an activist agitating for the southwest of Zimbabwe’s autonomy. Gumbo says President Mnangagwa, senior members of the ruling party ZANU PF and military commanders who propped Mnangagwa’s rise to power must answer to the Gukurahundi atrocities.

“We know them,” he told IPS. “All of them are still in government and going about with impunity. We will never rest until this is resolved to our satisfaction,” Gumbo said.
However, there is skepticism that President Mnangagwa will institute any official government inquiry when he is largely seen as “accused number one” in what remain unresolved “crimes against humanity,” as Gumbo put it.
When the Gukurahundi campaign was launched in the 1980s, ostensibly to quell an insurgency by dissents in Zimbabwe’s Matabeleland and Midlands regions that saw the deployment of the military, Mnangagwa as the security minister became the face of the brutal crackdown.
Presence Shiri, who was retired as commander of the Air force of Zimbabwe to take up a post in President Mnangagwa’s new cabinet as lands minister was commander of the 5th Brigade, the military unit trained by North Koreans to carry out the Gukurahundi tortures and killings.
He too has over the years refused to answer questions about the human rights violations.
“This government has no will to solve the Gukurahundi issue,” said Zenzele Ndebele, a Zimbabwean journalist and filmmaker whose 2007 documentary “Gukurahundi: A Moment of Madness” has never been shown in Zimbabwe.
The film was launched in neighbouring South Africa after the authorities failed to grant permission for public screenings.
“The incompetency of the National Peace and Reconciliation Commission works in government’s favour,” Ndebele told IPS.
In January this year, only weeks into his elevation with assistance from the military, President Mnangagwa signed into law the Peace and Reconciliation Bill which established the National Peace and Reconciliation Commission (NPRC) to “promote national healing.”
However, since the NPRC launched countrywide public meetings in February, activists have demanded that government address the Gukurahundi issue, something that the commissioners are accused of not being eager to include in their agenda.
As Gukurahundi demonstrations greeted Mnangagwa’s rise to power, special presidential advisor Christopher Mutsvangwa told the nation last December that continued discussion of Gukurahundi was “unhelpful” and “irresponsible,” in comments that were seen as reflecting the president’s views.
Velempini Ndlovu, an independent researcher documenting oral testimonies of the Gukurahundi, said victims seek closure and lament that they have been denied the opportunity to formally engage government.
“People want to be able to openly express their pain without being policed and told to ‘get over it.’ A gross human rights violation occurred,” Ndlovu told IPS.
Gukurahundi continues to polarise Zimbabweans, heating up online bulletin boards with some insisting the new president’s focus should be efforts to resuscitate the economy in a country where labour unions say more than 80 percent of the population are without jobs, while others say for the country to find peace and move on, the Gukurahundi must be discussed openly.
Other activists are demanding reparations with reports that thousands have failed to obtain legal documents such as birth certificates in the absence of their deceased parents killed during Gukurahundi.
“Victims want to be allowed to get identification as they are many who because their parents couldn’t get death certificates they also couldn’t get birth certificates and IDs,” Ndlovu said.