Foreign hand in the Sangh | The Indian Express

Foreign hand in the Sangh | The Indian Express

Foreign hand in the Sangh

Far from being indigenous, RSS has championed chauvinist ideas from Europe 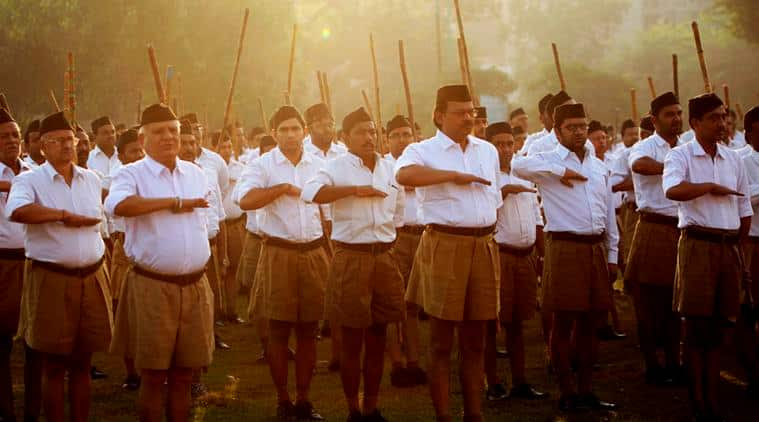 The Sangh Parivar has carried on the work of European fascisms in the Subcontinent. (Source: Express Photo By Amit Mehra/File)
Rakesh Sinha’s article, ‘RSS and the realm of ideas’ (IE, March 17), is a template for how to rewrite history through falsehood and misrepresentation, served with a shot of confusion. In this, Sinha is a true inheritor of the Hindu nationalist method of history writing. Even so, one can pick a couple of discernible lies and half-truths to easily unpack.
Sinha charges “left-liberal” intellectuals with the suppression of indigenous thought through “international camaraderie” as he predictably insists that the RSS is true to the soil in the inspiration it draws from 19th century reformers. In fact, a unique camaraderie that continues to plague the Indian political scene is that between B S Moonje (the first president of the Hindu Mahasabha and early associate of and mentor to K B Hedgewar, first sarsanghachaalak of the RSS) and Benito Mussolini. Instead of visiting the architectural and artistic marvels in Rome, Moonje chose to visit fascist military academies and have a meeting with the dictator. In the happy chat between the two, as noted in Moonje’s diary, he congratulates Mussolini on the fascist youth and military organisations that he had constituted, adding that India needed similar organisations. He proceeds to note that the RSS, formed by Hedgewar, is one such organisation. He returned to India and immediately set to work giving statements on how useful a militarisation of Hindu society on the lines of fascist youth organisations in Germany and Italy would be in the Indian subcontinent.
In the early 1930s, the discussion around such Hindu militarisation found a prominent place in the Marathi press, and Hedgewar, who formed the RSS in 1925, chaired a conference on Italian Fascism and Mussolini in 1934, where Moonje gave the concluding speech. There were other secondary paramilitary organisations with links to the RSS and Hindu Mahasabha — such as the Swastik League, headed by M L Jayakar, a prominent member of the latter — which drew inspiration from Italian fascism. In We or Our Nationhood Defined (1939), M S Golwalkar (who succeeded Hedgewar as sarsanghachaalak in 1940) expresses admiration for the Nazis for their policy on Jews, and says that this was a model that India could profit from.
To cite another example, in a chapter on “internal threats” to the nation in Bunch of Thoughts, Golwalkar says that the three internal “threats” more dangerous than any external ones were Muslims, Christians, and communists. It is, therefore, no surprise that the sangh parivar consistently stayed away from all the movements that form India’s anti-colonial struggle. The Hindu Mahasabha boycotted the Quit India movement, and Hedgewar said to RSS workers that they could participate in their individual capacity only, and that the RSS as an organisation would stay strictly away from the most vibrant of struggles for Independence. When the Indian National Congress passed the resolution to celebrate January 26 as a day of independence after resolving to fight for Purna Swaraj by hoisting the tricolour with the charkha in 1929, the RSS celebrated the day only once in 1930 by hoisting the saffron RSS flag instead.
Vinayak Damodar Savarkar, whom the RSS and BJP hail as “Veer” Savarkar, while an atheist and rationalist prior to his prison sentence, apologised to the British government from prison, several times, and gave his assurance that he would, after his release, remain loyal to them. As president of the Hindu Mahasabha, he repeatedly invoked German fascism and the treatment of Jews as a model for Indian socio-political life, frenetically urged Indian youth to join the British army in the World War, told members of the Mahasabha to undercut mobilisations during the Quit India movement, and never lost an opportunity to declare his loyalty to the British Raj.
Sinha says that the RSS has been “hyper-inclusive” in evolving ideas and programmes. Perhaps this is why Dinanath Batra, the RSS man for all things education, has asked for the removal of Tagore from school textbooks, even as Sinha tries futilely to appropriate Tagore, the unerring humanist, as a Hindutva icon.
Notable among the numerous “social projects” that Sinha speaks about are garbhasanskar programmes, run by Arogya Bharati (an RSS affiliate), for “customisable babies” that will be “fair and tall”, coupled with sex selection (IE, May 7, 2017), which is against the law of the land. These programmes were also inspired by Germany, and are in essence a Hindu nationalist shot at eugenics, which stands in violation of the law.
So much for Sinha’s argument that the antecedents of the RSS are truly indigenous. The Sangh Parivar has carried on the work of European fascisms in the Subcontinent.
The writer is associate professor, Centre for German Studies, JNU
For all the latest Opinion News, download Indian Express App
More From Parnal Chirmuley