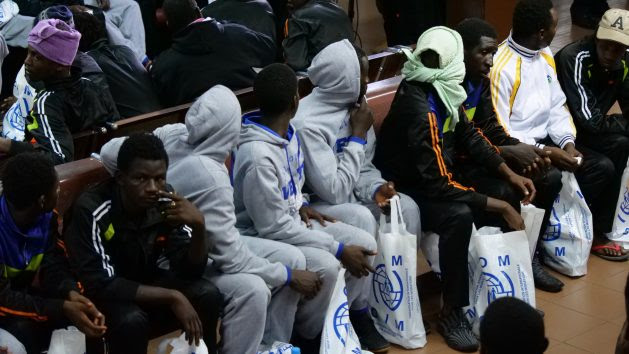 New arrivals receive assistance in Senegal. Credit : IOM/Lucas Chandellier
DAKAR, Mar 29 2018 (IPS) - Bouba Diop looks in delight at his uncle’s newly refurbished food canteen in the poor township of Keur Massar on the outskirts of the Senegalese capital Dakar.
Since returning to Senegal from Algeria and Libya, where he was working in the construction sector, he has been wondering how to rebuild his life after spending two years in North Africa trying to get to Europe by sea. But now, his uncle has given him back his manager job.
“We have to tackle the roots and ask ourselves the question: why are we ready to lose our lives to find work elsewhere?" --Florence Kim of IOM
Home sweet home
“I’m happy to be back after living in the North African hell, but I’m angry with myself for not making my dream come true. Well, it’s destiny. Now I must look forward to the future,” Diop, a 22-year-old man who attended a Darra (religious school), added.
While Diop reflected on what he called a shattered dream, at the same time in Kolda in southern Senegal, another returnee from Niger, Ibou, pondered his future, which he described as uncertain and complicated.
Unlike Diop, who has found solace in his uncle’s shop, Ibou is wondering what to do next after selling all his livestock to hit the road, crossing the Sahara desert on his way to the European El Dorado. But he never made it even to war-torn Libya.
“I was robbed in Niger of all my money (2,800 dollars) and belongings by people posing as smugglers who promised to take me to Tripoli, and finally to Italy,” the 25-year-old man said, adding that he was stranded for several months in Agadez (northern Niger, ‘door of the Sahara’), where he almost died of hunger and malaria.
“Somehow, I’m ashamed to return because I have become another burden on my family. I was born in a poor family. They all pinned their hopes on me, thinking that I would reach Europe and get a well-paying job to start sending them money,” he said emotionally.
Sad tales
Diop and Ibou’s stories are just the tip of the iceberg in Africa, where hopeless young sub-Saharan Africans, including unaccompanied children, leave their poverty-stricken or war-torn homelands to travel to North Africa in the hope of getting a job to fund their onward and dangerous journey to Europe.
While 150,982 ‘lucky’ migrants – from Africa and elsewhere – managed to reach Europe in 2017 by the Mediterranean Sea, more than 15,000 have died trying since 2014 (3,139 last year), according to the International Organization for Migration (IOM).
However, for those who, for whatever reasons, were stranded either in Niger or Libyan jails (20,000 last year) or sold as ‘modern slaves’ in Libyan markets, the only way to solve the crisis seems to be assistance for voluntary return to their home countries. 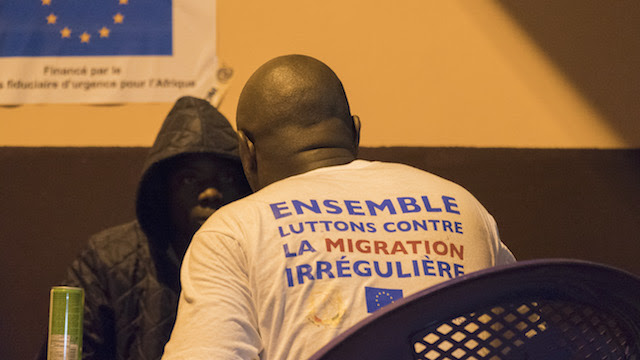 New arrivals receive assistance in Senegal. Credit : IOM/Lucas Chandellier
Assistance for voluntary return
IOM said that in 2017 it assisted 3,023 Senegalese migrants stranded in Libya and Niger to return thanks to the European Union Trust Funds.
Florence Kim, IOM regional media and communications officer for West and Central Africa, told IPS that in Senegal, assistance to returnees has been a major focus since the establishment of the office in 1998.
“In the absence of legal migration channels, assistance for voluntary return is one of the only options that can help migrants in distress whose fundamental rights are at risk of being violated,” she explained. “More than 23,000 people have since received return assistance and were assisted on their arrival.

“This assistance is part of the IOM assistance provided globally to return voluntarily. This assistance may take the form of direct assistance on arrival, educational or medical care, or individual, collective or community reintegration.”
Welcome back to society
“Returnees should no longer be perceived as a burden on communities but rather as an advantage,” Kim said, adding that one of the innovative approaches of the new EU Trust Funds project consisted of including communities of origin in the reintegration project.
“Whereas before we were going to work with the returnees, this time we are working to integrate those who have not left so that they can benefit from the activities that were initially offered to the returnees.”
IOM said in a report that most of the Senegalese returnees assisted in 2017 came from the region of Kolda (30%), Tambacounda (16%), Dakar (15%), Sédhiou (12%) and Kaolack (6%), while others (22%) came from other regions.
The report also said that only 2.5% of these assisted returnees in 2017 were women.
Voluntary return: lasting solution?
Kim, who noted that the EU gave an additional 95 million dollars to the IOM this month to complete the operations, said  voluntary return alone was not a lasting solution.
“If it is not accompanied by reintegration into the country of origin, and if nothing is offered on return, people will risk their lives again… We are on the right track. Our priority is to shelter thousands of stranded migrants and ensure that there is enough to ensure the sustainability of the solutions they are offered.”
It is widely believed that the UN migration agency has been offering a ‘stipend’ to help returnees resettle in their communities.
Kim clarified: “We only give pocket money that differs according to the countries of the region. However, this money – the only one given – is only used to cover immediate needs and transportation once they have arrived in their country from the airport to their homes.
“It is certainly not a salary or a larger sum of money. We do not want them to go home with money. If they come back and ask to be assisted, it is for other reasons than money. What helps them to reintegrate is the implementation of projects, and income-generating activities.
“All the work starts when they arrive in the country so no, we do not say they’re gone, they’re gone. Yes we have been monitoring and monitoring to make sure that what we put in place lasts.”
Leaving for economic reasons
Unlike sub-Saharan Africans from countries such as the DRC, Ethiopia, Central African Republic, Eritrea, Sudan and Somalia, to name only a few, who leave their homelands to escape conflict, war and massive human rights violations, Senegal’s Diop and Ibou could be classified as economic migrants.
William Assanvo, a West Africa-based expert for the Institute for Security Studies (ISS), told IPS, “If economic considerations are at the origin of the phenomenon, the answers must be economic. These involve the implementation of regional development plans, which involve investments in the education, health, agriculture or livestock sectors. The development and support of private entrepreneurship is also to be strengthened.”
Assanvo said some programs have already been set up by international partners, notably the European Union or France, to “fix” young Senegalese by providing support for the implementation of projects.
However, he said the question remains whether these initiatives were successful in achieving the goal and whether the effects were sustainable.
“They (often) fail to take into account the thousands of young people in search of a better socio-economic being. So these programs, while useful, are limited in the impact they may have.”
Valuable lessons
As with all major and daring humanitarian operations, the IOM seems to have learned some valuable lessons.
Kim said: “We have to tackle the roots and ask ourselves the question: why are we ready to lose our lives to find work elsewhere? Also, if there were legal migration routes it would be less dangerous for people.
“They would not need to leave on fortune ships, be tortured, and so on. There are legal mechanisms, but the general atmosphere at the moment in so-called host countries is not conducive to openness. The rise of populism and the fear of the other are present and our work also involves raising awareness and changing perception.
“It must be remembered how much migration is needed for the economy of host countries in an aging Europe,” she concluded.