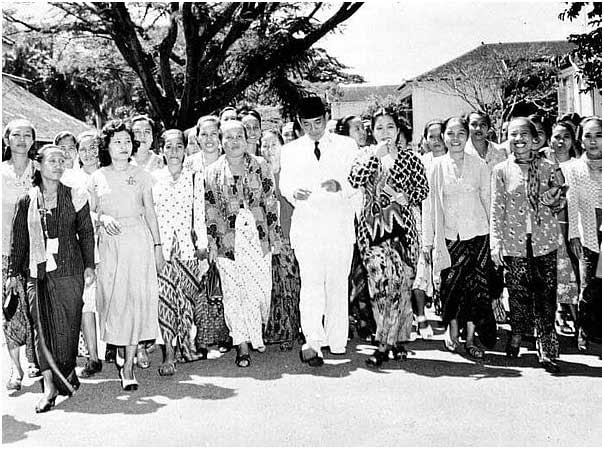 President Sukarno with leaders of the Indonesian Women's Congress in June 1950. Credit: topenMuseum, part of the National Museum of World Cultures / CC BY-SA 3.0
JAKARTA, Indonesia, Mar 30 2018 (IPS) - More than a century has passed since Putri Mardika, Indonesia’s first ever women’s organization, was established but challenges persist in the efforts to influence national politics to bring progress to all women.
Like many countries with a colonial past, it was not suffrage that first ignited early women activism in what is now Indonesia. Rather it was nationalistic aspiration and basic women’s empowerment issues such as education and women’s rights in marriage that mobilized the movement.
Indeed, Indonesian women’s movement emerged alongside the nationalist movement under the Dutch colonial rule, and remained mostly a part of that movement for the first half of the 20th Century until independence.
Education was seen as crucial in elevating women’s status, so early women’s organizations were mainly involved in activities such as literacy campaigns and courses on domestic sciences or sewing. Some also issued publications that disseminated ideas on women’s emancipation.
The first women’s congress was held on 22 December 1928 and involved 1,000 delegates from 30 women’s organizations across Indonesia and led to the formation of a national women’s federation. 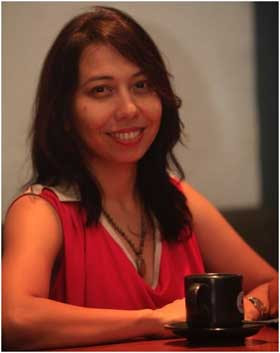 
It led to the formation of a national women’s federation that lasted until the three-year occupation by the Japanese from 1942. But on the important issue of polygamy, the federation was split between the secular organizations that wanted to ban it, and Islamic associations that refused to condemn it.
In the end, the women’s groups agreed to set aside the issue and focus on the needs of the nation, a compromise that would continue for many decades to come.
On 17 August 1945, nationalists led by Sukarno, Indonesia’s founding president, declared the independent Republic of Indonesia. It was followed by the struggle in subsequent years to maintain control over the archipelago as the Dutch tried to reclaim its colony.
But the new republic showed a clear democratic and egalitarian stance on gender, proclaiming in the 1945 Constitution that all citizens were equal before the law. This, however, did not always translate to gains for women’s rights in practice.

The proclamation of the 1945 Constitution that all citizens were equal before the law did not always translate to gains for women’s rights in practice
Though women’s organizations flourished in the 1950s, the emphasis on their role to support nation-building and as mothers continued to challenge efforts to assert individual rights. The organizations were highly diverse too, divided into religious, political party-affiliated, wives or professional organizations, making it difficult to become a unified political bloc. In addition, the friction between religious and secular organizations over matters like polygamy continued.
So despite the political rights and political space, post-independence Indonesian women’s movement failed to capture the political agenda. Women were keen to vote, but few were elected. The campaign for a marriage law that would grant women more rights also continued to fail until three decades later—and even then the demand to ban polygamy was not met.
Under the three-decade New Order administration under the country’s second president Suharto in 1966, the women’s movement was subverted as the regime suppressed any vocal political opposition.
At the core of its ideology, the New Order expected women to perform their motherly duty to ensure social stability, implement development plans and reduce the high birth rate. Wives’ organizations thrived, epitomized by the massive Dharma Wanita organization for the wives of civil servants, whose activities were linked to the state-sponsored Family Guidance Movement.

Under the three-decade New Order by President Suharto, women were expected to perform their motherly duty to ensure social stability, implement development plans and reduce the high birth rate.
But by the 1980s, new independent women’s organizations emerged, many with a strong human rights bent. The women’s non-government organizations included: Kalyanamitra, which focused on developing a centre of information and communication for women; the legal rights organization for women LBH APIK; the Annisa Swasti Foundation, which organized women workers; Rifka Annisa, which worked on reproductive health issues; and Solidaritas Perempuan (Women’s Solidarity), which worked to empower and organize women migrant workers. Their work was important amid continued government’s suppression of civil society.
The end of the New Order and Suharto’s resignation in 1998 led to the growth of new women’s organizations. There was more recognition for the importance of gender issues, as seen in the shift in the role of the Ministry for Women’s. Suharto’s fall had been preceded by race riots, during which dozens of ethnic Chinese women became victims.
The tragedy mobilized women’s groups to push for the government’s accountability, leading to the establishment of the National Commission on Violence Against Women, or Komnas Perempuan.
Indeed, violence against women became one of the most important fields of work for Indonesian women’s organizations in the post-1998 period, helping unite women in pushing for crucial laws like the 2004 Law on Domestic Violence.
The National Commission on Violence Against Women was established as result of the push for government accountability by women’s groups following the tragedies that surrounded the race riots preceding Suharto’s fall.
Another important legal initiative was the campaign for the 30-per-cent quota for women’s candidates imposed since 2003 on political parties contending legislative elections. This and the introduction of direct regional elections provide more opportunities for women’s representation in politics (link Paywall).
The last two decades of post-New Order democratization has also given women more space to participate in public decision-making processes, to make planning and budgeting more gender-responsive.
But a lot remains to be done. Despite an increasing number of women holding top government positions such as Cabinet minister, supreme justice and governor, politics has remained the domain of men overall. Political parties are still run under a system of highly patriarchal patronage and, in general, they do not show much interest in advancing gender equality.
In addition, the emergence of political Islam, increasing religious conservatism and widespread sharia-based bylaws of the past few years have posed a major setback for women across Indonesia. It has led to increasing efforts to emphasize women’s domestic role, and to limit women’s mobility and regulate sexuality.
More than a century has passed since Putri Mardika, Indonesia’s first-ever women’s organization was established, but similar challenges remain in the efforts to influence national politics to bring progress to all women. Only when united in a massive and organized way—the way they were over the domestic violence legislation—can women’s groups overcome these challenges. ###

This article was first published in the Friedrich Ebert Stiftung blog FES-CONNECT
https://www.fes-connect.org/popular-posts/detail/fighting-the-colony-women-activism-beyond-suffrage/