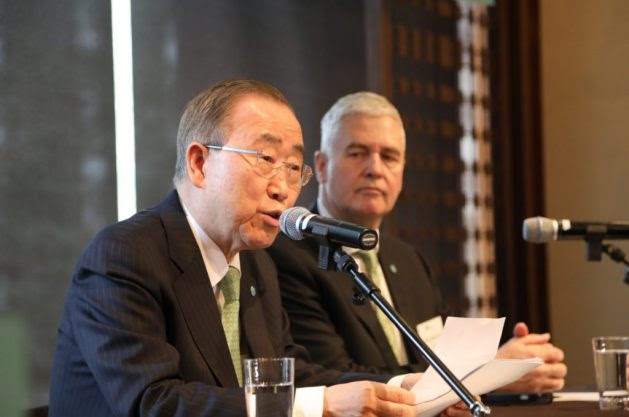 Ban Ki-moon, the new president and chair of GGGI, with Dr. Frank Rijsberman, the group’s director general. Credit: GGGI
SEOUL, Mar 27 2018 (IPS) - In the face of climate change and growing energy demand in developing countries, Ban Ki-moon, the new president and chair of the Global Green Growth Institute (GGGI), unveiled his vision for a more sustainable path by helping countries in their transition to greener economies and achieving the Sustainable Development Goals (SDGs).
“We at GGGI need a much greater capacity to help member states in their transition to sustainable development and also to adapt to climate change,” said Ban Ki-moon, who previously served as the eighth secretary-general of the United Nations, in his first press conference as the President of the Assembly and Chair of the Council of GGGI on March 27 in Seoul.
"Countries must shift their economies towards environmentally sustainable and socially inclusive pathways." --Ban Ki-moon
Headquartered in the heart of Seoul, GGGI has 28 member states and employs staff from more than 40 countries, with some 26 projects currently in operation. These include green cities, water and sanitation, sustainable landscapes, sustainable energy and cross-cutting strategies for financing mechanisms.
As part of GGGI’s growth path, Ban hopes to add new members like Canada, New Zealand, Sweden, Switzerland and France.
“We need more members, particularly from those countries that would be in a position to render the financial and technological support for the developing countries which otherwise would not have much capacity to mitigate or adapt to the changing climate situation. That’s why 28 countries are not a reasonable size as an international organization. We need more member states, particularly from those OECD member states,” said Ban.
“(For that), I’ll continue to use my capacity as chair of GGGI and also I will try to use my network as a former secretary-general of the United Nations,” he added. “To implement the Paris Agreement, countries must shift their economies towards environmentally sustainable and socially inclusive pathways – which we call green growth.”
Environmentalists have warned that most developed countries are falling short of their pledges to curb the greenhouse gas emissions that cause climate change. The future of global cooperation on the issue was clouded after US President Donald Trump’s decision last June to withdraw the US from the 2015 Paris Climate Agreement.

“This (withdrawal by Trump) is politically suicidal and economically irresponsible as the leader of the most powerful and the most responsible country. Moreover, this is scientifically wrong,” Ban, who has been a vocal critic of the move, said in Seoul this week.
“I sincerely hope President Trump will change and understand the gravity, seriousness and urgency of this situation, in which we must take action now. Otherwise, we’ll have to regret [the consequences] for succeeding generations, humanity and this earth.”
The new GGGI chair also discussed his transition from the secretary general of a global body with 193 member countries to his leadership of GGGI, which is mandated to recommend development solutions for developing countries.
“First, GGGI is committed to achieving the same vision that I’ve pursued for the past decade. Second, GGGI is the right place to add my own experiences and passions with which I had led the United Nations.
“To achieve GGGI’s goals, I will make the most of my own experiences. If the United Nations is dealing with internationally divisive political issues, GGGI is addressing the issue on which the whole humanity is united with their full awareness of its compelling mission.”
The appointment of Ban Ki-moon as the new Assembly President and GGGI Council Chair became effective on February 20 following the unanimous agreement by members of the GGGI Assembly, the Institute’s governing body.
Dr. Frank Rijsberman, Director-General of GGGI, spoke about GGGI’s key achievements in 2017.
He said that “2017 was an excellent year for GGGI, in which we helped mobilize 524 million dollars in green and climate finance to support developing countries achieve their green growth plans.”
He said this money would be used by member countries to, for example, increase climate resilience in agriculture in Ethiopia, install solar energy plus battery storage in eight islands in Indonesia, build a green housing project in Rwanda, and prevent deforestation in Colombia.
GGGI also continued to support governments to develop green growth plans and policies, for example, a Green Growth Plan for Sonora State in Mexico, new energy efficiency laws in Mongolia, and an NDC Implementation Plan for Fiji.
Rijsberman added that GGGI has forged a strong strategic partnership with the Green Climate Fund. As of March 2018, 15 of GGGI’s member and partner countries have elected GGGI to be their delivery partner for their GCF Readiness projects. The GCF Board recently approved two direct access grants to GGGI Member countries supported by GGGI, namely a 50-million-dollar grant for Ethiopia and a 35-million-dollar project for Rwanda.
“With Mr. Ban’s leadership, I am confident that GGGI will be able to quickly expand its partnerships and memberships and mobilize greater results – championing green growth and climate resilience,” added Dr. Rijsberman.