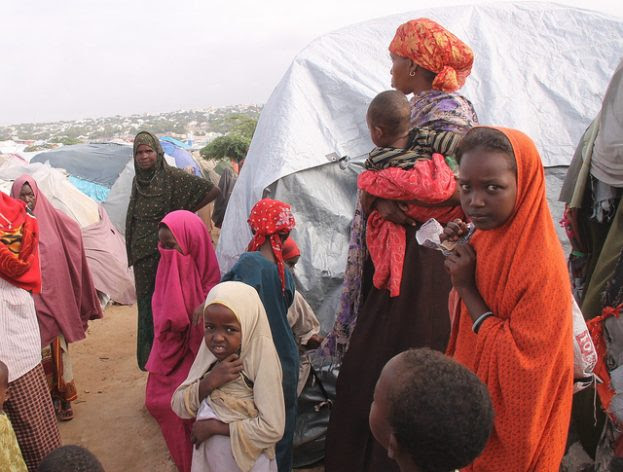 Almost 400,000 famine victims who fled to the Mogadishu for aid at the height of famine, are still living in one of the many refugee camps outside Mogadishu. Credit: Abdurrahman Warsameh/IPS
UNITED NATIONS, Mar 28 2018 (IPS) - Largely driven by conflict, the number of hungry people has dramatically increased around the world, reversing decades of progress, according to a new report.
Launched by the Food and Agriculture Organization of the United Nations (FAO) and the World Food Programme (WFP), the Global Report on Food Crises 2018 has exposed the worrisome scale and magnitude of today’s crises.
“It’s been a very difficult year,” FAO’s Senior Strategic Adviser and lead author of the report Luca Russo told IPS in response to the staggering figures.
The UN agencies found that almost 130 million people across 51 countries face severe food insecurity, an 11 percent rise from the previous year.
Russo pointed out that insecurity has increasingly become the main driver of food insecurity, accounting for 60 percent, or 74 million, of the global total. If this population made up a country, it would be larger than the United Kingdom and France combined.
The report attributes the increase to new and intensified conflict in countries such as Myanmar, Nigeria and Yemen.
Russo expressed particular concern for the Democratic Republic of Congo (DRC) and South Sudan, both of which have become Africa’s largest humanitarian crises.
In the DRC, an escalation of violence and political clashes has left over 13 million Congolese in need of humanitarian aid, including 7.7 million who are severely food-insecure.
In 2017, the UN declared the DRC a level three humanitarian emergency—the highest possible classification on par with Iraq, Syria, and Yemen.
The UN Security Council echoed Russo’s concern and highlighted the need to “address the presence of armed groups in the country” and called for “transparent, credible, and inclusive elections.”
While an international conference has been organized for April to mobilize funding for the DRC’s 1.7-billion-dollar humanitarian appeal, South Sudan also continues to struggle with low humanitarian funding and a population at the brink of famine.
Both FAO and WFP warned that without sustained humanitarian assistance and access, more than 7 million—almost two-thirds of the population—could become severely food-insecure in the coming months while over 150,000 may be pushed over the line to famine.
“Unless these humanitarian gaps are addressed, we may have to declare again a famine in South Sudan,” Russo said.
So far, just 8 percent of the country’s 1.7 billion appeal has been funded.
However, while humanitarian aid can help save lives, Russo noted that such assistance won’t provide long-term solutions.
“Because of the fact that the conflicts continue, you have more and more people on the brink of famine…with humanitarian assistance, we are able to keep them alive but we are not able to provide sustainable solutions,” he said.
While the outlook for 2018 remains bleak, not all hope is lost.
Russo highlighted the importance of working along the humanitarian-development nexus in order to move beyond focusing on short-term assistance to addressing long-term issues which can help secure peace.
Most recently, the UN Mission in South Sudan (UNMISS) brought together South Sudanese pastoralists and farmers who have long clashed with each other over land and resources.
To this end, the meeting allowed the two parties to discuss methods of conflict resolution and establish a mutually beneficial agreement in order to prevent future conflict.
Though it may be a small step in a small part of the country, such efforts can help to reduce tensions and create a more substantial chance for peace.
Russo urged for the international community to act on global crises, pointing to the case of Somalia’s 2011 famine which only saw assistance and action after over 250,000 died and the UN’s declaration of a famine in July 2011.
“Even if some of these situations are not in the media, they are there and they exist and they are likely to expand. We should not wait for a famine to be declared to act,” he said.