Print | Send by email |En español
This article is part of a series of stories and op-eds launched by IPS on the occasion of this year’s International Women’s Day on March 8, which this year has as a theme: “Time is Now: Rural and urban activists transforming women's lives.” 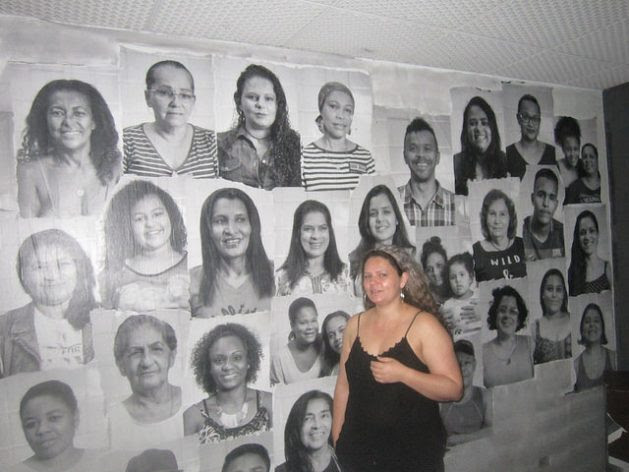 Cheila Patricia Souza, who participated in the São João 588 Occupation of an old hotel converted into housing for 80 families, stands in front of a collage of photos of the protagonists of the struggle for a home of their own, in the centre of São Paulo, Brazil. As in similar battles, most of the people involved were women. Credit: Mario Osava / IPS
RÍO DE JANEIRO/SÃO PAULO, Mar 7 2018 (IPS) - “Here we empower women and we do not tolerate domestic violence, which we treat as our own, not as an intra-family, issue,” says Lurdinha Lopes, a leader of the squatting movement in Brazil.
She emphasises the rules of the Charter of Principles governing the Manoel Congo Occupation, through which decent housing was secured for 42 poor families, in the heart of the city of Rio de Janeiro.
Other rules encourage children to stay in school and prohibit drugs and alcoholic beverages in the hallways and common areas of the 10-story occupied building, she told IPS at the site. The more than 120 residents include 27 children.
Women make up the immense majority and “about 90 percent of the owners” of the apartments in the building, which was a squat when it was occupied in 2007 by the National Housing Struggle Movement (MNLM).
“Some of the women were escaping abuse from their ex-partners,” others have gone back to school, said Lopes, ahead of International Women’s Day, on Mar. 8, given the theme this year by UN Women: “Time is Now: Rural and urban activists transforming women’s lives.”
The squatting movement in Rio de Janeiro is less well-known than the one in São Paulo. They occupy abandoned buildings, arguing that the Brazilian constitution of 1988 stipulates that all property must fulfill a social function.
“Rio de Janeiro has a tradition of squatting, but the occupations are not very visible because they occur outside the city centre,” said Lopes, local coordinator of the MNLM, most of whose activists are women.
The Manoel Congo Occupation, named in honour of the leader of a black slave rebellion in 1838, is a milestone for its success in settling poor families in a key central part of the city. The building is right next to the city council, and just 30 metres from Cinelândia, the popular name of a major public square where the largest political demonstrations are held in the centre of Rio de Janeiro.
“It’s a miracle to win a place in the capital’s central corridor,” said Elizete Napoleão, a member of the MNLM’s national leadership and one of the heads of the movement in Rio.
The building originally belonged to the National Social Security Institute (INSS).
The 42 apartments have been renovated and have all the necessary amenities. All that remains is to rebuild the ground floor, which Lopes believes will be ready “in a month or a month and a half.” 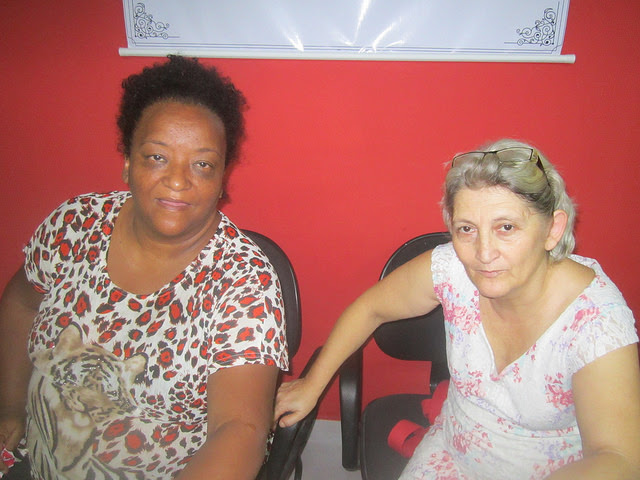 Elizete Napoleão (L) and Lurdinha Lopes, coordinators of the National Housing Struggle Movement (MNLM), lead the Manoel Congo Occupation, which provided a home for 42 poor families in the heart of Rio de Janeiro. Credit: Mario Osava / IPS
It is the result of a long battle that included numerous street marches, invasions of the Caixa Econômica Federal – a state bank that is an agent of federal government social policy – and occupations of the INSS offices.
After occupying the property, resisting pressure and eviction orders, and winning ownership for social housing purposes, the movement finally obtained financing to reform the building and adapt it for housing.
In 2007, the political scenario was favourable. President Luiz Inacio Lula da Silva, of the leftist Workers’ Party, was beginning his second consecutive term and two years later he would launch the “My House My Life” programme, a new attempt to reduce the housing deficit in Brazil, currently estimated at six million units.
Finding alternatives in vacant buildings in the centre or central neighborhoods of large cities is the approach taken by the MNLM and similar movements.
“In the port area and the centre of Rio de Janeiro there are two or three hundred unoccupied buildings,” Napoleão told IPS.
In the city centre there is access to services, schools, hospitals, jobs and the best places for working as street vendors, said Lopes.
Meanwhile, neighbourhoods on the outskirts of Rio de Janeiro, where the poor are generally forced to move, are controlled by drug traffickers and militias – armed bands led by former police officers who control services and demand monthly “protection” payments by merchants.
Women also lead the struggle for housing in São Paulo
Repopulating the centre helps to revitalise run-down historic districts in the big cities of Brazil, said Antonia Ferreira Nascimento, a coordinator of the Homeless Workers Movement (MTST) in São Paulo.
Her group occupied the old Columbia Hotel in 2010, on Avenida São João, a key reference point in Brazil’s largest city. Of the 80 families living in the hotel, “70 percent are headed by women,” estimated Ferreira, a married mother of three who has been involved in the struggle for housing for homeless families for 24 years.
“Our goal is not just housing itself, but to denounce the housing deficit, demand public policies, ensure rights, health and education for everyone,” she told IPS during a visit to the building, explaining her organisation’s struggle for urban reform. 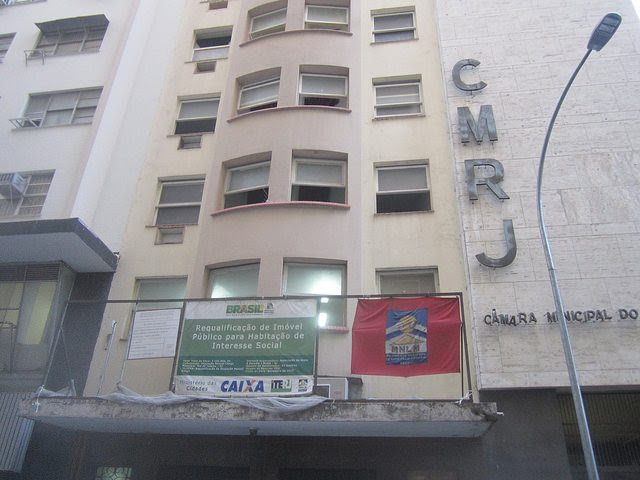 The facade of the building occupied by 42 homeless families since 2007 in Rio de Janeiro. In addition to low-cost housing, its residents celebrate having escaped from the poor outlying neighbourhoods that are at the mercy of the violence of drug trafficking and vigilante gangs of former or off-duty police. Now they have access to public services, schools and better jobs. Credit: Mario Osava / IPS
She estimates that the centre of São Paulo has 20,000 available housing units that have been empty for years and can thus be expropriated by the public authorities to serve “the social interest” of offering housing to those who need it.
Nazaré Brasil, a painter, promotes cultural life in the new community. Her unit is an example of how to adapt a simple hotel room into a comfortable apartment where she and her elderly mother live.
At her initiative, the squat receives artists and activists who stay for a few weeks to learn about the experience and, eventually, reflect it in art or articles.

A larger-scale and more complicated case is the so-called Mauá Occupation, in a hotel near the Luz railway station, where 237 families lived for 10 years under threat of eviction, until they were finally granted permission to live there in November 2017.
The city government agreed with the former owner to purchase the six-story building which has three U-shaped wings, for the families squatting there. The struggle was headed by Ivanete Araujo, of the Movement for Housing in the Struggle for Justice (MMLJ).
There are dozens of activist groups in São Paulo, a good part of them assembled in the Front for Housing Struggles (FLM), which launched an offensive in October 2017, when 620 homeless families occupied eight buildings in and around São Paulo.
Many of the leaders at the forefront of the movement are women, who are the main victims of the housing deficit and the main interested parties in public sector housing policies.
Felicia Mendes, an activist for 40 years, coordinates the FLM on the south side of São Paulo.
She is currently leading the struggle to obtain land to settle 868 families living in precarious conditions in the so-called Parque do Engenho Occupation, actually a wooden shack camp in Capão Redondo, a neighbourhood of almost 300,000 people at the southern end of the city of São Paulo.
Mendes obtained housing in a previous occupation, of Chácara do Conde, also in the south, but closer to the city centre than Capão Redondo.
“In addition to housing, people need to be offered a livelihood,” said the activist who “ran away from home at age 17,” lived in several Brazilian states, had “the privilege of studying theatre” and lost her husband because of her dedication to the struggle for housing, but remains committed to the cause of the homeless.