US upbeat about fast NAFTA deal, Canada says much work is left | The Indian Express

US upbeat about fast NAFTA deal, Canada says much work is left | The Indian Express

US upbeat about fast NAFTA deal, Canada says much work is left

The United States wants to hasten the slow pace of negotiations on the $1.2 trillion North American Free Trade Agreement, citing a need to finish before a July 1 presidential election in Mexico. 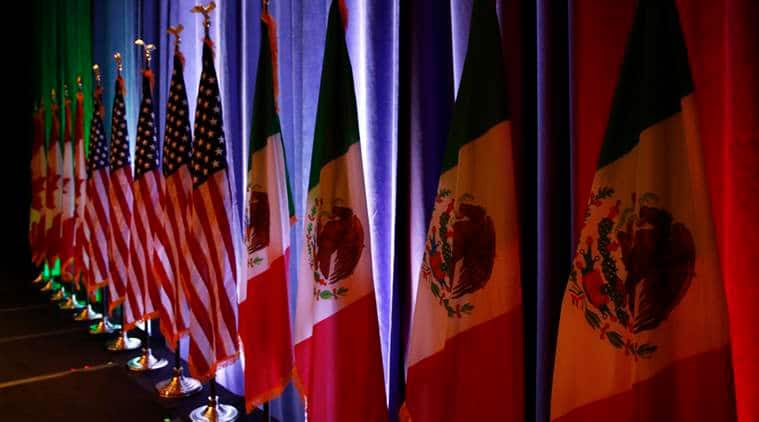 The national flags of Canada, the US and Mexico are lit by stage lights before a news conference, at the start of the North American Free Trade Agreement renegotiations. (AP Photo/Jacquelyn Martin, File)
US Trade Representative Robert Lighthizer on Wednesday expressed optimism that talks to modify NAFTA could be wrapped up quickly, but a top Canadian official was more downbeat, saying much work remained. The United States wants to hasten the slow pace of negotiations on the $1.2 trillion North American Free Trade Agreement, citing a need to finish before a July 1 presidential election in Mexico.
“I think we are making progress. I think that all three parties want to move forward, we have a short window, because of elections and things beyond our control,” Lighthizer told CNBC television.
“But if there’s a real effort made to try to close out and to compromise … I’m optimistic that we can get something done in principle in the next little bit,” he said.
But chief Canadian negotiator Steve Verheul told reporters, “We’ve got quite a bit of work do yet,” and noted that Washington had not yet explained what it meant by an agreement in principle.
Officials from the three countries are due to meet in the United States next month for the eighth round of talks.
Only six of the roughly 30 chapters have been closed and wide differences remain on topics such as dispute resolution and how much North American content should be contained in autos produced in the three NAFTA nations, a file that Verheul said was still far from settled.
But Canadian Foreign Minister Chrystia Freeland later told reporters by phone she was “truly heartened” by some of the progress made on the autos question.
The United States last week dropped its insistence that all autos made in the three NAFTA countries have 50 percent US content.
That said, Canada and Mexico are still wrestling with a separate US demand that autos produced in the three member nations contain 85 percent NAFTA content, up from 62.5 percent now.
“We don’t have a deal yet but we are working really, really hard,” said Freeland, who did not answer directly when asked about the merits of a deal in principle.
Verheul said there were “obviously some significant gaps on many issues,” citing the US positions on dispute settlement, government procurement and a sunset clause that would allow one party to quit NAFTA after five years.
Canadian Prime Minister Justin Trudeau last week said a deal was likely while stressing the challenges posed by the Mexican vote and US congressional elections in November.
For all the latest World News, download Indian Express App
Publicado por salud equitativa en 4:35